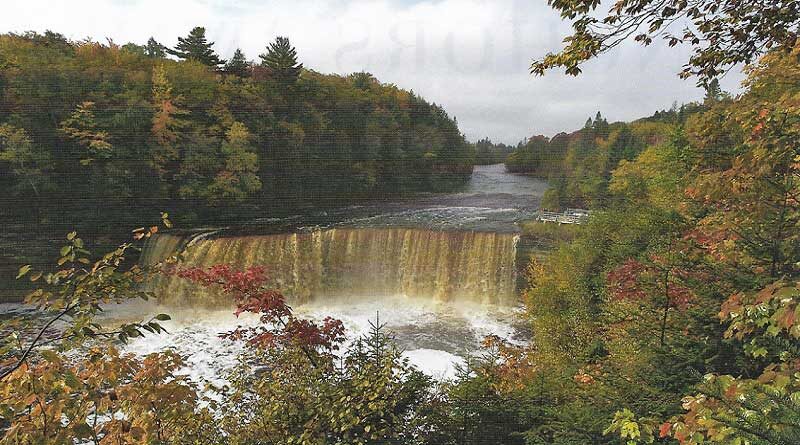 Tucked under a canopy of trees, just a stone’s throw from one of the largest waterfalls east of the Mississippi (second only to Niagara), sits one of Michigan’s oldest craft breweries.

When siblings Lark and Barrett Ludlow opened up Tahquamenon Falls Brewery near Paradise in 1996, it was just the fourth pub of its kind in the Upper Peninsula and one of about 30 in the state.

When siblings Lark and Barrett Ludlow opened Tahquamenon Falls Brewery near Paradise in 1996, it was just the fourth pub of its kind in the Upper Peninsula, and one of about 30 in the state.

The brewery is a tribute to the logging that once dominated this region — an industry to which the Ludlows have family ties. Their great-grandfather moved his logging company to the Newberry area in 1916. As his sons, F.W. and John Alton (Jack), grew up, they worked alongside him timbering the area forests.

Shortly after the Tahquamenon Falls State Park was established in 1947, Jack and his wife, Mimi, became co-owners of four “forties” — a total of 160 acres of land adjacent to the mighty Tahquamenon River and its Upper Falls. There was no designated land-access to the falls at that point, but Jack had a dream of creating a place where visitors could get up close to the “Root Beer Falls,” as they were affectionately known.

In 1949, Jack and his land partner, R.J. Beach, reached an agreement with the Michigan Conservation Commission to turn over all but 2 acres to be incorporated into the state park. Beach was granted a 25-year contract to run his Toonerville Trolley to transport visitors to the river, along with docking privileges for his boats to operate tours on the river. Jack received $2,000 and a 2-acre parcel with a parking lot, less than a mile from the falls.

Jack built Camp 33 — named in honor of the 33rd camp established by the Barrett Logging Co. — as the backdrop for his first concession and gift shop operations. Visitors who were meandering to the falls and back under a canopy of trees would now have a place to rest, grab a bite to eat, or buy a souvenir. After Jack’s passing in 1959, Lark and Barrett’s grandmother oversaw the business until 1987, when her grandchildren proudly took over the family businesses.

The 1990s were a pivotal year for Camp 33, first with the rebuilding of a new gift shop and concession stand that evoked an Up North feel. Expanding on the family’s vision of being a welcoming place for travelers, the restaurant and brewery came next.

Lark became one of the first female brewsters in the state, crafting her portfolio of beers on a small 10-barrel system set up on the south end of the building, where the stainless-steel tanks still tower over the bar area.

Since the beginning, Lark’s beers have been traditional and approachable, well-suited for tourists who may not necessarily be craft beer aficionados. She has perfected about 15 timeless recipes, with four beers on tap on a rotating basis.
The names, such as Lumberjack Lager and Falls Tannin (the river’s amber color comes from the leaching of tannic acid from the nearby cedar and hemlock swamps), are naturally inspired by the area’s wilderness and logging industries. Lighter, fruit-forward beers include raspberry, peach, and blueberry (with floating blueberries) ales.

While the massive lodge-like pub has plenty of seating, be prepared to wait for a table inside or outside during peak season.

The interior focal point is the floor-to-ceiling fireplace — a must for a logging camp tribute, the owners say. The rustic walls are adorned with what you might expect in a U.P. cabin: mounted animal heads; antlers; and pelts from elk, moose, timber wolves, and black bear, along with smaller stuffed creatures.
Lark’s beer list compliments a hearty menu that any lumberman or nature lover might enjoy. Popular dishes include the smoked fish dip, wild rice soup (made with locally harvested rice), brew pub cheese soup, bison burgers, whitefish (sandwich or entrée), and pasties — a U.P. staple.

Tahquamenon Falls Brewery is open seasonally (May through October and mid-December through March). As the brewery and gift shop are located inside the state park, a Recreation Passport or daily use fee is required for entry. The park is open year-round.

Park Update: The trail to the Upper Falls consists of a leisurely, handicap-accessible stroll through the forest from Camp 33. More effort is required to get to the Lower Falls from the camp, and requires a trek down a rigorous, four-mile trail. A separate park entrance off M-123 may be the easier option for those who want to visit the Lower Falls, especially for those who would like to kayak on the river.

Last Memorial Day weekend, a new 142-foot aluminum pedestrian bridge was opened to allow visitors to hike the trails on the 5-acre island that splits the Lower Falls. The $1.28-million project also included an expanded boardwalk connecting the mainland to the bridge, as well as a half-mile, barrier-free pathway around the perimeter of the island.

Reprinted from the fall 2022 issue of Michigan BLUE magazine.