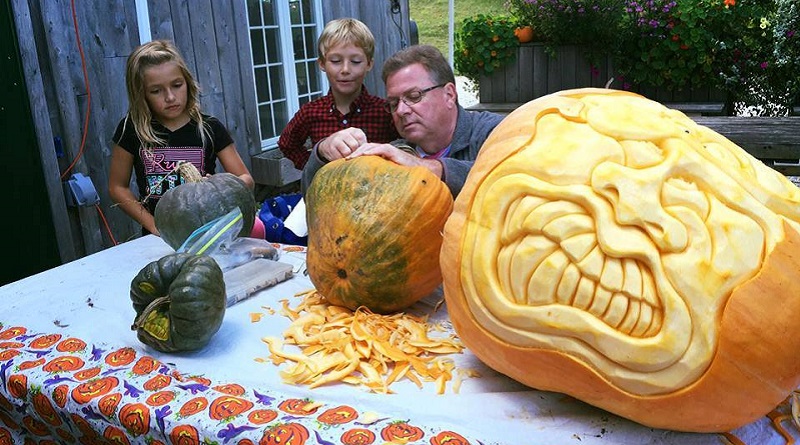 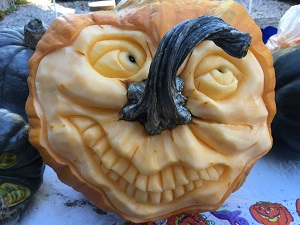 Pat Harrison gets paid to play with his food – and he loves it! The former graphic designer and amateur cartoonist has built a reputation as one of the finest pumpkin and vegetable sculptors in Michigan.

“I started with Halloween Pumpkins,” says the outgoing agri-artist, who has dubbed himself ‘Lord of the Gourd.’ “Once I was deemed old enough to carve without cutting off my fingers I was allowed to carve my own creations and I guess I never stopped.”

Born in Grand Haven and raised in Allegan, Pat eventually moved to Traverse City and worked at his family’s motel there. It was here that he took to the annual motel decorating for Halloween with great passion. 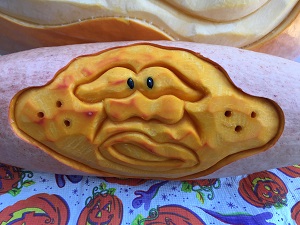 “One night I was carving a pumpkin contemporary style when I slipped with the knife and accidently hacked a chunk off the front of it,” Pat says. “It was late at night and I couldn’t get another pumpkin, so I instead decided to try to fix it, and as I was cutting on it I just started shaping it and the next thing I knew I was sculpting.”

By 1998, Pat had moved to Oakland County and during a visit to Oak Haven Farm in Holly, he developed a business relationship – he would carve on weekends in October in exchange for free pumpkins and the ability to sell them. And when the Oakland Press came out one day to do a story about the farm and put his picture on the front page of the paper, his professional sculpting career began. 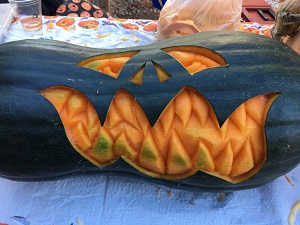 “The phone started ringing and one of those calls was from WDIV in Detroit asking me to come carve live in their studio for the morning news broadcast,” says Pat. “That was the first of 14 television appearances I have done thus far.”

In order to help his mother on her property on the Leelanau Peninsula, Pat moved north in 2006. He quit his day job and became a full-time carver and musician.

“For two-thirds of the year I’m a carver who plays music on the side,” Pat says. “During the winter when my hands need time to rest and heal, I’m a musician who carves on the side.” Last fall alone, Pat created more than 300 pumpkins – not to mention zucchini squash, gourds, rutabagas, beets, radishes, watermelons and other produce. 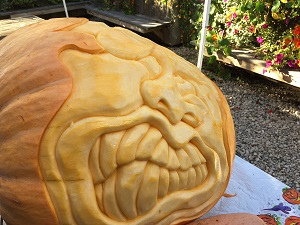 Many of the items that Pat carves can even be cooked and eaten. In fact, he’s been hired to go to people’s homes and carve entire meals while teaching them his technique – and then, there’s the feast afterward!

“I’m partial to my spaghetti squash carvings because I fill them with sauce and meatballs and then eat the entire sculpture,” Pat says with a smile. He’s also specialized his stuffed rutabaga heads – which he hollows out and stuffs with mashed apples and carrots, blended with spices.

Throughout the year, Pat offers workshops where he introduces his craft and shows others how to create their own masterpieces – often out of the most imperfect produce. 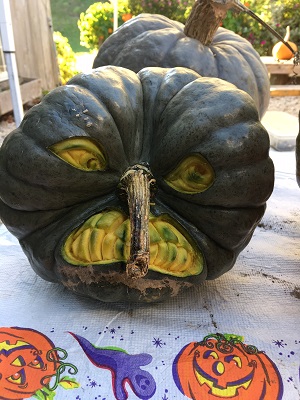 “I don’t like a perfectly round pumpkin, I want the mutants, the ones that ordinarily end up in the cow feed pile – they have more character,” says Pat. “I like to say that they carve themselves and I just hold the knives.”

As for tools, Pat starts with an X-Acto knife for his initial cuts and then uses penknives, paring knives and clay sculpting tools – and many other tools found in any household junk drawer – to shape exaggerated faces.

“The most important step is to forget that you can’t carve and then just do it,” Pat admits. “I’m self-taught and while I may carve one way, it doesn’t mean it’s the only way to do it.”

And when it comes to carving, Pat is in good company.

“We have some incredibly talented carvers here in Michigan,” says Pat. “The best I have seen is Ray Villafane – the two-time winner of the Food Network Challenge. There’s also Ed Moody just down the road from me who does giant pumpkins and Tom Nardone of ‘Extreme Pumpkin’ fame. We’re not rivals. We’re just people who love what we do.” 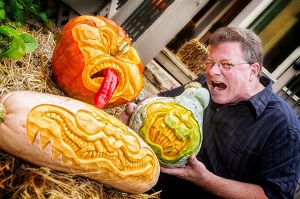 For more information, including a list of upcoming appearances or details on booking your own demonstration or workshop: Lord of the Gourd.

Reprinted from the Fall 2011 issue of Michigan HOME & Lifestyle Magazine.