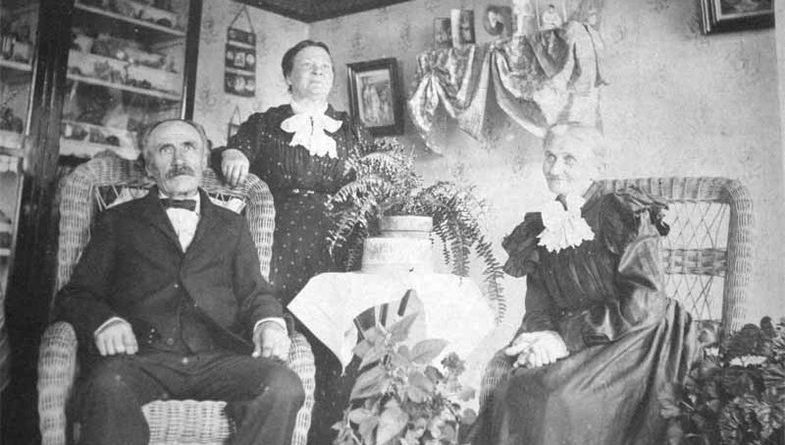 While doing research on Keweenaw Peninsula and the Bete Grise Bay Lighthouse / Mendota Lighthouse (which sold in 2020), I was looking up Henrietta Bergh who was noted as a “keeper” in this of an unofficial light. I found a descendant who provided this image of her (she is in the middle, along with her brother and sister-in-law) and some insights into the family history.

According to Nora Dee…the great great granddaughter of Hansine Henriette (Anderson) Bergh…Hansine was born September 29, 1844 in Vadso, Norway (where her father was mayor for 30 years). On November 14, 1864, Hansine married Erick Michelsson Juntti “Jig” Berg (August 17, 1826-May 30, 1899) and around 1881 or 1882 they immigrated to the United States with seven of their eight children (all boys).

Making their way to Michigan’s Upper Peninsula, they eventually owned “Bergh Island” (now known as Rabbit Island) and had a cabin there that they stayed in while fishing the Lake Superior waters (remnants of that cabin are still there today).

For years, as part of my “Ladies of the Lights” program, I have told Henrietta’s story (her full name Hansine wasn’t known to me until last week) where she would hang a lantern in the window of her house so that her fisherman husband would be able to find his way back when he went out after dark.

“It is true that Hansine would put a lantern in the window so that Jig and probably some of her boys, as they were all fisherman, could find his way home,” says Nora. “As time went on many sailors depended on her and would stop by the home to thank her for her service to them.” 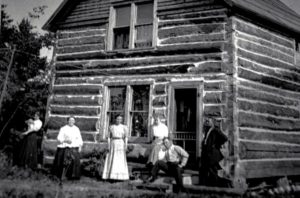 The Bete Grise Bay Lighthouse was first put into service in 1869, but its life was short-lived as it was decommissioned in 1870. It was reinstated in 1895 and operated until 1933. later decommissioned in 1956. Since that time, it has been privately owned…with new owners set to take over yet this summer.

Now apparently, the original Bergh home on the mainland is now gone, although there is one home in town built by their son, “Ole” Daniel William, that is still standing in Bete Grise. Ole has an interesting story himself, as he was elected Sheriff of Keweenaw County in 1939, but he died just hours into his term at the age of 60, so his wife, Ida Jarve Bergh, stepped in to assume the role. In fact, she was later elected to three 2-year terms and served a total of eight years (1939-1946) – the longest tenure for any of the only 18 women who have held the title of Sheriff in Michigan.

“Pretty something for those times,” recalls Nora. “She was known to “turn around the crime” in Keweenaw county and the prisoners loved all her great homemade meals.” 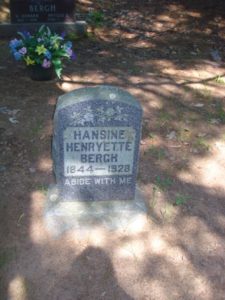 Hansine died in Copper Harbor on May 17, 1928 at 83 years of age. She is buried in the Copper Harbor Cemetery at the tip of the Keweenaw Peninsula (although her headstone incorrectly spells her name as Hansine Henryetta Bergh). Sons Ole and Axel are also buried there, along with a few other members of the extended family.

“Jig’s death certificate says he died in Eagle Harbor,” notes Nora. “The Eagle Harbor cemetery many years back pulled all their markers so it’s unknown where his actual grave is.”

Unfortunately, no photo of Jig exists.

FOOTNOTE: Rabbit Island is privately owned and operates an active artist in residency program under the Rabbit Island Foundation.