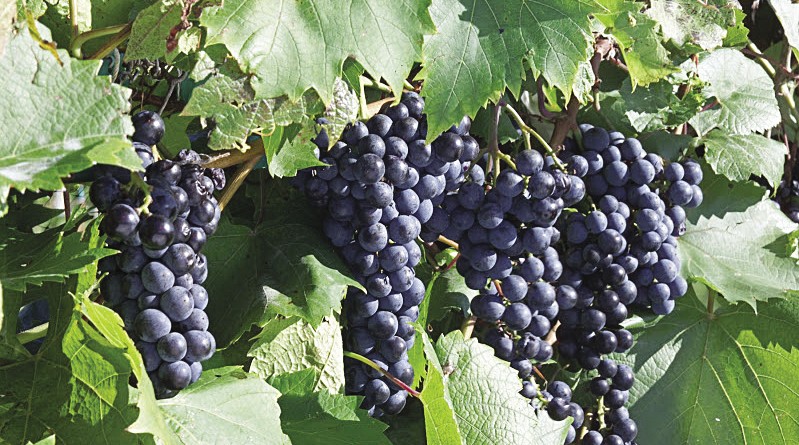 Over the past 40 years of the Michigan Wine Competition, presented annually by the Michigan Grape & Wine Industry Council—operating under the Michigan Department of Agriculture & Rural Development, it is rare for a hybrid red grape to rise above all other dry red competitors.

Yet, that is just what happened this year when Walloon Lake Winery’s North Arm Noir was named “Best of Class,” receiving a Double Gold Medal in the Dry Red category. It was one of eight such awards presented on Thursday, July 27 at the Michigan Gold Medal Wine Reception at the Kellogg Hotel & Conference Center on the campus of Michigan State University in East Lansing.

Twenty-nine wine experts from around the country gathered July 18 in East Lansing for the actual competition. They spent the day sampling 380 wines that were entered from 58 of the state’s 130 wineries. The competition is only open to wine produced from Michigan grapes and other fruit. The complete list of award winners can be found online here.

Walloon Lake Winery is one of 10 wineries that make up the Bay View Wine Trail in and around the greater Petoskey area. These wineries are part of a larger Tip of the Mitt American Viticultural Area (AVA)— which encompasses 2,760-square miles throughout Alpena, Antrim, Charlevoix, Cheboygan, Emmet and Presque Isle counties in the northern Lower Peninsula. Established in August 2016, the Tip of the Mitt is the latest of five federally-recognized AVA’s in Michigan—the others include Old Mission Peninsula, Leelanau Peninsula, Fennville and Lake Michigan Shore.

Located further north than any of the other AVA’s, the Tip of the Mitt region offers a unique set of challenges and opportunities when it comes to growing grapes. Lake effective conditions from Little Traverse Bay and the Straits of Mackinac often create colder and windier winter seasons, meaning varietals typically planted downstate can’t withstand the harsh conditions. Hybrid varietals—such as Marquette, Frontenac, Lemberger, Traminette, Vignoles and a dozen others—represent new standards in cold hardy viticulture (the science and cultivation of grape vines) and enology (the science that deals with wine and wine making).

According to the University of Minnesota, Marquette—a cousin of Frontenac and grandson of Pinot Noir— is a promising new red wine variety that combines high levels of cold hardiness and disease resistance with excellent wine quality.

Viticulturally, Marquette appears to have considerable promise and has proven to be an outstanding vine with outstanding resistance to downy mildew, powdery mildew and black rot. In terms of cold hardiness, it has been consistently hardy in well-managed vineyards on good sites in not only in the Upper Midwest, but also in Eastern grape growing regions such as Michigan, New York, New England, and Quebec.

Marquette is best when utilized as a medium-bodied red table wine. Finished wines are complex, with attractive ruby color, pronounced tannins, and desirable notes of cherry, berry, black pepper and spice on both nose and palate. Marquette does exhibit cherry and black currant flavors and aromas typical of many hybrids, but can be much more complex with integrated notes of blackberries, pepper, plum, tobacco, leather and spice.

In addition to North Arm Noir, described as a “ruby red wine with a smooth tannin structure, notes of cherry and spice and a complex, multi-layered oak finish,” two other wineries in the Bay View Wine Trail also brought home medals from the state competition.

Seasons of the North Winery, located in Alanson, brought home Silver Medals for its Lake House and Burt Lake Breeze, along with a Bronze Medal for its Mullet Lake Mist.