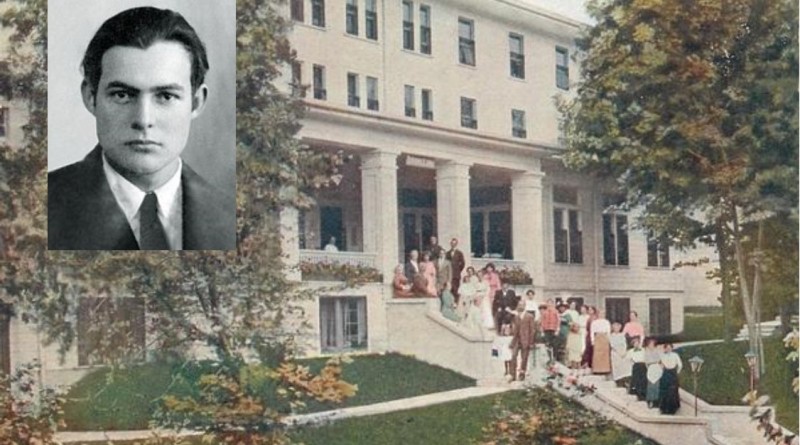 Hemingway at Eighteen: The Pivotal Year that Launched an American Legend by Steve Paul is scheduled to be released this fall

For the first 22 years of his life, Pulitzer and Nobel Prize-winning Ernest Hemingway spent his summers exploring the woods and waters of Walloon Lake, Horton Bay, Petoskey and the neighboring communities of Northern Michigan. It was here he discovered his love of fishing, hunting and writing. It was here where many of the scenes and characters for his future works would be shaped—most notably, those of Nick Adams.

“Hemingway had a very special place in his heart for Northern Michigan. The memories and images in his mind found their way into his works throughout his life, even when the stories were set in other locales around the world,” says Chris Struble, president of The Michigan Hemingway Society. “He remarked to his sister, Ursula, in a letter from 1943 that his time here was the clearest part of his life. But life changed him and he was afraid that if he came back, it wouldn’t be the place he remembered and he couldn’t risk losing what he had known and loved.”

The Michigan Hemingway Society is once again hosting its annual literary and history conference, October 6-8 at The Terrace Inn in the Northern Michigan Chautauqua community of Bay View.

This year’s keynote speaker is Steve Paul, the author and editor of several books including Hemingway at Eighteen: The Pivotal Year that Launched an American Legend, due out this fall.

Paul recently retired from the editorial board of The Kansas City Star after 41 years. Starting out on the city desk, he was a longtime arts and culture editor, book critic, special assignment writer, projects editor and writer, mentor and coach to young writers and teachers, and producer of high-profile feature stories on culture, music, architecture, books, people and the city, as well as being the co-owner of a bookstore.

Hemingway himself started his writing career at The Kansas City Star. After graduating from Oak Park River Forest High School in 1917, he left the culturally-rich environment there in the Chicago suburbs as well as the freedom of summers in Northern Michigan when he moved to Kansas City to become a journalist. If all his trips to Kansas City were added together, he lived and worked in that town for a little more than a year—the longest stay, for six months, was when he was a cub reporter from October, 1917 until April, 1918.

From there he joined the Red Cross as an ambulance driver in Italy during World War I, returning the following year to the United Sates and finally Petoskey as a wounded and decorated war veteran. He then married his first wife, Hadley Richardson, in Northern Michigan and the two moved to Paris. While there, Hemingway began freelancing for the Toronto Star, writing fishing sketches, before becoming a foreign correspondent.

Membership in the Michigan Hemingway Society is $20 per calendar year for an individual, $30 for a family (two adults at the same address) or $10 for students. Benefits include a reduced fee for the annual MHS weekend conference, a printed copy of the MHS newsletter and periodic email updates of MHS news. If you are not a member of the Michigan Hemingway Society for 2017, join online now.