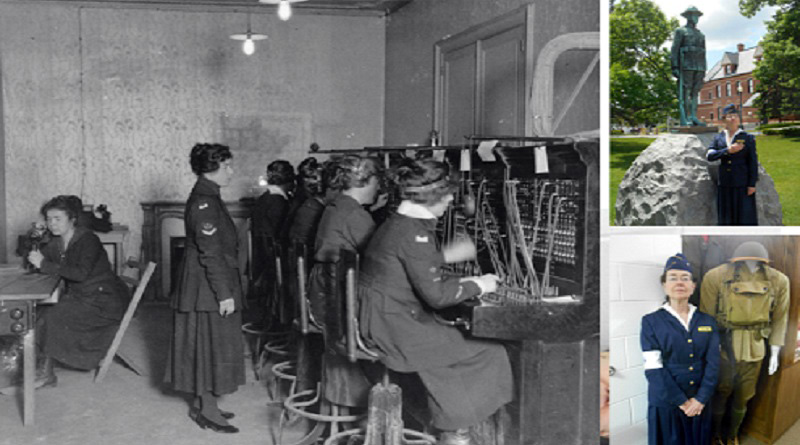 When the U.S. entered World War I in 1917, General John “Black Jack” Pershing insisted on bilingual switchboard operators near the front lines. Although formally known as the Signal Corps Female Telephone Operators Unit, sworn in by the U.S. Army Signal Corps, they were referred to as the Hello Girls.

Over 7,000 applicants—fluent in both English and French—applied for these international positions, yet only 332 were accepted (with just 223 being sent overseas). Several of these women came from Michigan, including a young Oleda Joure from Marine City, located just 103 miles northeast of Chelsea in St. Clair County.

As part of the Chelsea District Library’s community-wide historic interpretation installation—World War I Centennial: Strong Foundations, New Possibilities—a special program titled “General John J. Pershing’s Hello Girls” will be presented free to the public from 6:30-8pm on Wednesday, August 10. In uniform and with music, Michigan storyteller Lois Sprengnether Keel portrays Oleda, who received special permission given her age to enlist in the war effort. She was among one of the final groups of the Hello Girls sent overseas.

“The centennial of the American entry in World War I is April of 2017 and I wondered what women did to support the war effort overseas beyond the usual medical support,” Keel says. “I found the Hello Girls fascinating, including the fact that they were rejected by the Army later as being veterans even though they went through military training, had to sew or buy their own uniforms, were subject to full military regulations, including court martial. To learn that several women came from Michigan made me look even closer into their story.”

Keel, who has more than 35 years’ experience as both a librarian and professional storyteller, speaks to groups around the state on topics of historical interest including the Underground Railroad and the Civil War, pioneer life, early education and more. Her portrayal of Oleda Joure is among her newest programs.

“Aside from the fact that Oleda’s daughter has done a wonderful job of documenting her mother’s service and has shared beyond the online biography, I was attracted to Oleda and her brother being weekend musicians in the Thumb area,” says Keel. “The music of World War I helps tie the story of these women and the war together beautifully. “

Despite the fact that the Hello Girls were subject to strict Army regulations overseas and were required to wear Army uniforms, they were considered civilian contractors and were not given honorable discharges and were denied veteran’s benefits. It wasn’t until 1978, the 60th anniversary of the end of WWI, that they were officially recognized when Congress approved Veteran Status & Honorable Discharges for the remaining Hello Girls. Oleda was among those women.

World War I Centennial: Strong Foundations, New Possibilities, commemorates the centennial anniversary of WWI and is made possible in part by a grant from the Michigan Humanities Council, an affiliate of the National Endowment for the Humanities as well as the Chelsea Chamber of Commerce Tourism Action Plan Program (CTAP), through Washtenaw County Convention and Visitors Bureau.

Several WWI-era photographs, letters, stories and artifacts including a helmet, binoculars, sword, riffle, medals, journal, uniform and more from local residents, are also on display inside the Chelsea District Library.

Maps for self-guided tours are available free for those who wish to explore the exhibit on their own. Private guided group tours can be made during the 5-month exhibit, with prior arrangement.