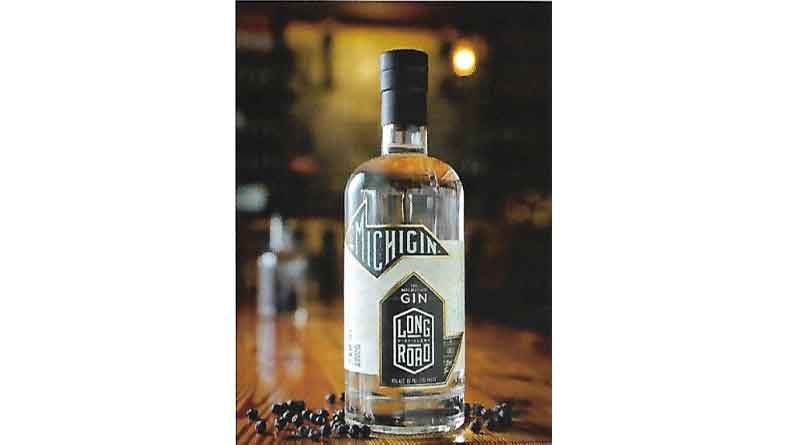 Before they even opened the doors to Long Road Distillers in Grand Rapids in 2015, owners Jon O’Connor and Kyle VanStrien knew they wanted to create a unique gin that would be a purely Michigan product.

Sourcing fresh water from Lake Michigan was an easy first step. Heffron Farms in Belding grew the red winter wheat, which was milled at the distillery, on the corner of Leonard Street and Quary Avenue. A diverse blend of botanicals also came from around the state, including lemon verbena and fennel from Visser Farms in Zeeland; lemon balm from Creation Farms in Beulah; and Galena hops from Michigan Hop Alliance in Northport.

Yet, it was the key ingredient for gin that was the most difficult to find locally.

“I mentioned in passing to my cousin last summer that we were on the hunt for local juniper,” says VanStrien, “and she said it grew everywhere on Beaver Island where she grew up.”

Last September, a team from Long Road boarded the Emerald Isle ferry boat in Charlevoix for an often-rocky, two-hour ride to Beaver Island. There, they set out in search of wild juniper—which, it turns out, wasn’t that difficult to find. In fact, the bushes are so abundant that many of the island’s 600 or so year-round residents find them obtrusive.

Harvesting was a bit more laborious, given juniper bushes are quite bristly and the ripe purple berries grow tight against the branch. Yet, within two days the crew had gathered more than 200 pounds and were on their way home to Grand Rapids. There, the MICHIGIN recipe was perfected and distillation began in the 500-gallon Vendome still. In February, 500 cases (3,000 bottles) of the much-anticipated spirit were released to the public.

“MICHIGIN is unlike any other gin on the market due to the unique flavors we were able to extract by using local juniper and distilling it fresh,” O’Connor says. “It has the familiar aroma of fresh pine and juniper berries, but quickly transitions into scents of cucumber, cedar, vanilla and tropical fruits.”

And what do Beaver Islanders think of the gin inspired by their nearly 56-square-mile island and its rich Irish and Mormon heritage?

Bill McDonough, CEO of the Beaver Island Boat Company and the third-generation owner of McDonough’s Market (the island’s oldest, continually-run family business, circa 1933) made a point to stop into Long Road earlier this year to sample the three island-influenced cocktails featuring MICHIGIN: Emerald Isle, Mormon Cannon and Strang’s Crown—named after the self-proclaimed King James Strang, who reigned over Beaver Island from 1850 until his assassination there in 1856.

MICHIGIN is now a proudly-featured spirit at McDonough’s Market, as well as at a few bars and restaurants on the island, and more than 600 other locations statewide.

“We can’t keep it on the shelves,” McDonough said. “We even have a few bottles on reserve for locals who heard about it online and want to try it when they return for the summer.”

(Reprinted from the Summer 2017 issue of Michigan BLUE Magazine)