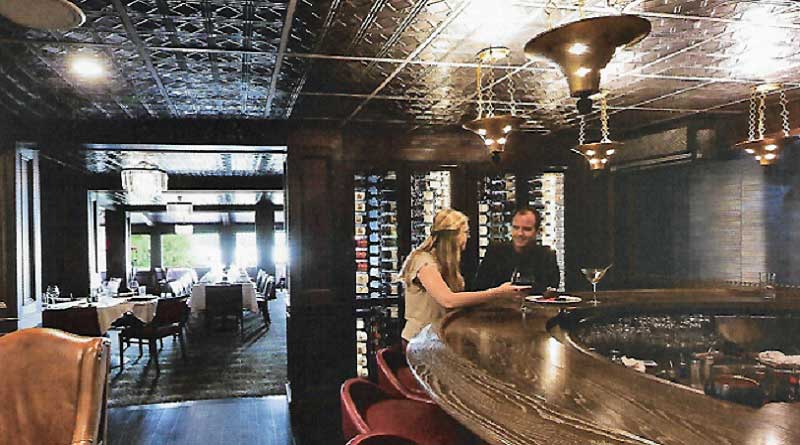 Just as the last of the autumn leaves blow away and the snow begins to fall, life on Walloon Lake slows to a comforting pace as the new season settles in. Winter in northern Michigan is something magical to experience, a charming wonderland retreat reminiscent of a storybook romance come to life.

In the heart of the village, Walloon Lake Inn is steeped in nostalgia aptly blended with modern décor and cuisine prepared by Chef Mike DeMarco. Originally from Long Island, New York and educated at the Fort Lauderdale Art Institute, DeMarco has proven his abilities throughout the region working at Boyne USA Resorts and at the award-winning Sage restaurant in Petoskey. This will be his first winter at Walloon Lake Inn, but he’s excited about the opportunities.

“We are hoping to create a destination restaurant even during the winter months,” DeMarco says about the 62-seat restaurant which faces the east end of Walloon Lake just a short walk from the award-winning Hotel Walloon. “We’ll be offering a 3-for-$50 special which will include a salad or appetizer, entrée and dessert from our scratch menu which we think will be very popular.”

Sourcing as much as they can locally, DeMarco says he will find inspiration from the produce that is available during the cold-weather months from nearby Bear Creek Organic Farms and other growers. That means hearty dishes made with potatoes, squash, Brussel sprouts, cranberries and apples, as well as wild game like venison.

“We’ll give it [venison] a try and see how well it goes over,” says DeMarco, who proudly makes his own sauces and stocks using basic techniques which create rich, flavorful liquids for the braised dishes and comfort foods that he’s planning to serve. Other winter dishes include favorites like lamb chops, squash bisque and apple pie.

As she looks forward to the changing of the seasons, manager Melissa Ogden is confident in DeMarco’s skills to keep Walloon Lake Inn a popular spot for locals and visitors alike. “He has the best can-do attitude around and is eager to give our guests exactly what they’re looking for. We’re fortunate to have him leading our team.”

Opened as Fern Cottage by Clayton Bixby in 1891, this quaint country inn served as a docking point for the steamboats that would transport the summer people to their cottages or hotels around the lake. Guests at the inn paid $2 per day (with special rates for the full week) and were given private rooms, access to indoor bathrooms and a large dining room to take their meals.

The establishment was sold to Mrs. Gorman Trixler in 1948, becoming The Silver Birch Inn with its “Colonial Dining Room” specializing in group dinners and serving shrimp and fresh water fish every Friday night. Several other owners were at the helm here during the next three-plus decades before Chef David Beier purchased the property in 1981, renaming it Walloon Lake Inn. He continued to operate it as a bed-and-breakfast and restaurant offering “dining and cocktails in an atmosphere of scenic charm.”

In 2014, the intimate inn was sold to Matt Borisch who invested time and money to totally remodel the restaurant and lounge into the upscale eatery it is today. Guests continue to dine on timeless dishes as well as regionally-inspired items in the open dining room, with its large windows overlooking the historic Walloon Lake. The cozy lounge area features an eight-seat curved bar, seating area with leather chairs and couches and a baby grand piano where if you’re lucky, YoungMin You will be tickling the ivories.

Walloon Lake Inn is open Thursday through Sunday from 5-9pm during the winter season. Live music, including local pianists and guitarists, is offered in the lounge area at least two nights a week to provide a unique level of ambiance. For more information, including the weekly menu, visit WalloonLakeInn.com.