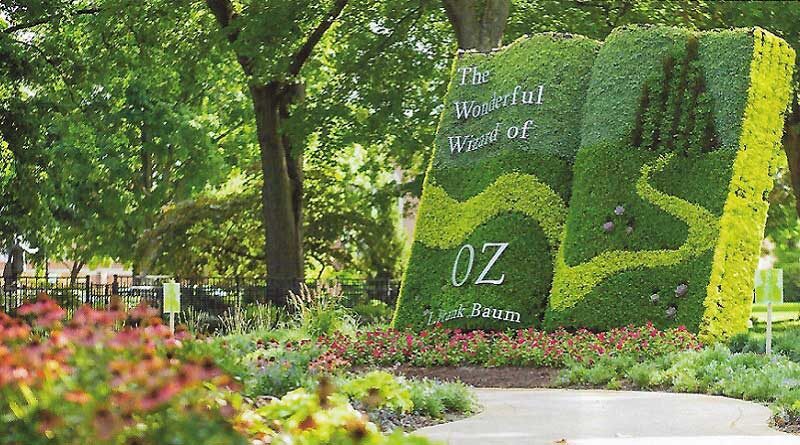 The characters from the beloved story of “The Wonderful Wizard of Oz” have jumped out of the book’s pages to proudly take up residence next to a “Yellow Brick Road” outside the Herrick District Library in downtown Holland.

Kitty-corner across 12th Street, the 5.6-acre Centennial Park boasts an extension of the iconic yellow path leading to a gigantic 10-by-12-foot open-book “living mosaic” crafted with more than 6,000 plants.

Collectively known as The Holland Oz Project, the exhibit is a partnership of the Holland Area Visitors Bureau, Holland in Bloom, the Herrick District Library, and the City of Holland. It was created in honor of one-time Macatawa summer resident and author L. (Lyman) Frank Baum, who penned the childhood classic in 1900.

The free outdoor exhibit has been years in the making, according to Sally Laukitis, a longtime Holland resident and retired executive director of the Holland Area Visitors Bureau. She explains that the idea was born out of the 2012 International Wizard of Oz Club National Convention, which was held in Holland after a nearly 30-year hiatus. Founded in 1957, the group regularly met during its first three-and-a-half decades in Holland’s exclusive Castle Park, which is commonly believed to be one of the many inspirations behind Baum’s 14-novel Oz series.

Brodin Studios in Minnesota was commissioned to create seven bronze pieces based on the original storybook illustrations by W.W. Denslow. Dedicated in September 2019, the life-size sculptures include the Tin Man, Scarecrow, and a courageous-looking Cowardly Lion, along with the Wicked Witch and a 12.5-foot-tall “Fighting Tree” complete with a Flying Monkey perched on one of its branches.

A bearded Munchkin holds a book over his head, inscribed with dedications from The Women’s Literary Club of Holland and The Schwartz Family Castle (the famed towering brick building still standing in the privately-owned Castle Park), among others.

The appearance of Dorothy and her faithful companion, Toto, might surprise many who are only familiar with the Judy Garland movie character. Denslow’s depiction is that of a young girl, about the age of 4, some say mirrored after a local girl named Dorothy Hall who summered with her grandparents just a stone’s throw away from Baum’s “The Sign of the Goose” cottage.

Other accounts note the name came from Baum’s wife’s side of the family, after an infant girl named Dorothy died at age five months in 1899. Robert Baum, Frank’s great-grandson, says he heard both stories growing up as a child. “There’s some Dorothy in every woman,” Baum was quoted as saying in a 2019 documentary titled “The Origin of Oz,” which was produced by WZZM TV13 in Grand Rapids.

“All of the sculptures were created to allow children to climb on and engage with them,” Laukitis says. “It can be the dead of winter and there are still people visiting the statues, climbing over them, and taking pictures. Kids are sitting on the Tin Man’s knee, they’re climbing on the back of the Cowardly Lion, or standing close to Dorothy, who’s only a few feet tall. They can reach the branches of the Fighting Tree — and we encourage people to walk around to see the back, because it’s just as fascinating as the front.”

While the bronze sculptures are accessible year-round, the living floral book is a seasonal element that’s repopulated each summer with plants grown in the city’s greenhouse.

Reminiscent of the grand floats of the annual Rose Bowl Parade in Pasadena, Calif., this component was the brainchild of Allison Jesky — at the time a horticulturalist at Holland’s Hope College and a member of Holland in Bloom (a local chapter of the national America in Bloom program) — who had seen similar pieces at the Mosaïculture Gatineau Exhibition in Ottawa, Canada, in 2017.
It was there that Jesky met the father/son duo of François and Mathieu Gravel, of the Quebec-based Kadriform International, a company that specializes in the manufacture of sculptures and metal structures. Together, they developed and designed a larger-than-life open-paged book made completely of living plants, which complemented Holland’s overall vision for honoring its Baum and Oz legacy.

“We spent over a year developing the project with Allison, giving her all the documentation and information needed for her to discuss and involve other key people in the project so it could happen,” says Mathieu Gravel, Kadriform’s vice president. “We designed the sculpture with Allison’s concept, supervised the first installation, and did the necessary formation to local horticulture to make sure the project could live for many years.”

In addition to the sculptures, book, and Yellow Brick Road, the Holland Oz Project includes five commemorative benches placed outside the library and in the park, giving visitors a place to sit and reflect on the exhibit, and maybe take a mental trip back in time (or to a different world, like Oz).

Reprinted from the Summer 2022 issue of Michigan BLUE magazine.