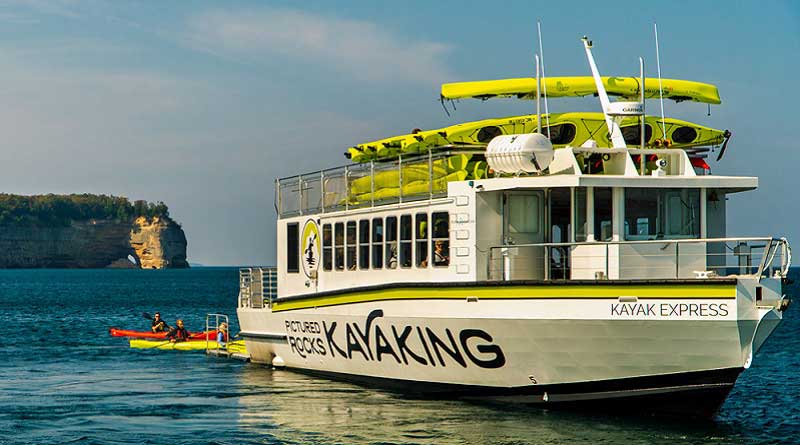 The second boat in the Pictured Rocks Kayaking fleet was custom built by Moran Iron Works in Onaway. Specifically designed to launch two kayaks into the open water at the same time, as well as retrieve them, it is the first of its kind on the Great Lakes. The boat is also faster, wider and more stable to handle the fluctuating waves of Lake Superior.

“We are the only kayak company that launches by boat and not by shore,” says Deidre Phillipson, manager of Pictured Rocks Kayaking. “Our boat stays with the group for the entire adventure. If at any time in the paddle guests need a bathroom break or are tired, the boat will be right there to pick them up.”

Departures begin at the East Channel of Munising Bay and head into Lake Superior where kayakers are launched just past Painted Cove to begin their paddle toward Chapel Rock. With miles of sugar sand beaches and picturesque rock formations rising as high as 600 feet above the shoreline, it is a trip unlike any other in the country.

“This was by far one of the best trips I have been on,” says Carley Shinn of Findlay, Ohio, who visited with her boyfriend in September 2019. “The view from the water was unreal and our tour guide was full of information and kept the tour entertaining and fun. We can’t wait to come back up there and tour Pictured Rocks again.”

Established in 1966, Pictured Rocks became the National Park Service’s first national lakeshore and last year (for the first time in its history) more than 800,000 people visited this area of the Upper Peninsula.

Kayak Express carries 36 18-foot tandem sea kayaks, 72 passengers and six trained guides, doubling the company’s tour capacity. This second vessel allows for up to four trips per day, each lasting between four and five hours each, with two hours (or about five miles) of actual kayaking time.

Prices are $159 for adults and $119 for youth aged 12 and younger. Personal flotation devices are provided for all, with spray skirts and wetsuits available upon request. Tours run late May through late September and are weather dependent.