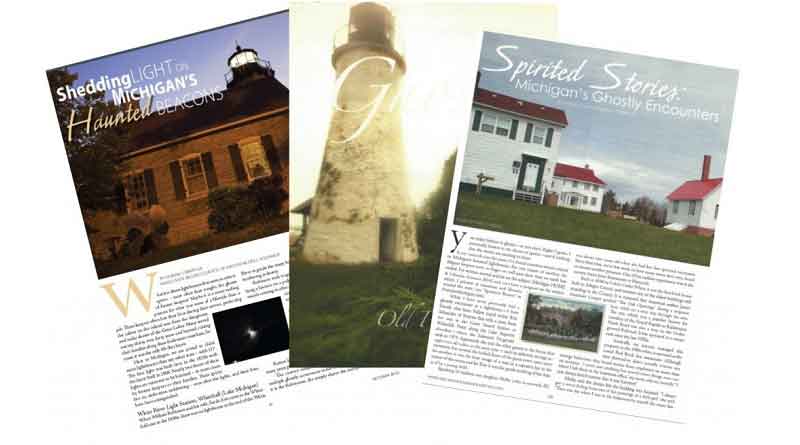 My earliest writings are a journal I still have stored away from third grade (Mrs. Laymeyer’s class at Gilkey Elementary School in Plainwell). I think there are a couple creative writing certificates as well. Also tucked away in the corners of some storage unit (I have two) is a mimeographed copy of a book of poems from sixth grade.

By high school, I’d worked up to saving my articles from our student newspaper, The Trojan Torch, in a three-ring binder that I used to submit my portfolio for the annual “Student Journalist of the Year” competition hosted by the Michigan Interscholastic Press Association at Michigan State University. This collection also featured a handful of stories that I’d written for a local weekly newspaper, Twin Cities News, where I not only covered news stories in the Plainwell and Otsego area but where I also had a column called “Between Two Ages.”

I think I always knew I was destined to be a writer—whether that was a reporter or a freelancer.

Over the last 30 years, I’ve amassed hundreds of articles on everything from school board meetings to sports features and business profiles. I’ve written for newspapers, magazines, travel guides and online blogs and websites.

When I was hired by West Michigan Tourist Association (WMTA) in 1997 (where I worked until launching Promote Michigan in August 2004), my focus became Michigan’s vast tourism industry—camping, golfing, fishing, gambling, kayaking, treasure hunting, historic sites, natural wonders, agricultural destinations and so much more, including eating and drinking. I am fortunate to share the stories of the people, places and products that make the Great Lakes State so special, from coast to coast to coast.

One topic that has been a favorite for the past 20+ years is lighthouses. It’s funny, growing up I guess I knew what a lighthouse was but had no idea that Michigan had more than any other state (as well as more lines of freshwater coastline than any other state). While at WMTA, my first project was to research the lights featured in the Lake Michigan Circle Tour & Lighthouse Guide. That project sparked something inside me and I became increasingly fascinated with these historic treasures that doted the shoreline around both Michigan’s Lower and Upper Peninsulas.

Not only was I writing articles, I began speaking on the topic at libraries, historical societies, museums, senior centers and other venues around the state. My two most popular programs are “Michigan’s Ghostly Beacons” which shares stories of the haunted lighthouses in the state and “Lakes of the Lights” which highlights the nearly three dozen women who have worked at our lighthouses over the years. In some cases, the stories overlap—as a handful of the women keepers also haunt their lights.

In the spring of 2017, I was contacted by History Press (a division of Arcadia Publishing) in South Carolina, asking if I would be interested in writing a book on the haunted lights of Michigan. I’m not sure how they found me—unless they did a good search for articles on the topic and my name popped up repeatedly. In any case, I was honored to be asked and spent the better part of last year doing some initial research, reaching out to historical societies and lighthouse organizations to make sure the topic was one they’d embrace, and psyching myself up to FINALLY pen a book.

Last month, I signed a contract to provide 12 to 15 chapters which will ultimately become Michigan’s Haunted Lighthouses, due out in the spring of 2019. The title will be a compilation of many of the stories I’ve been sharing for years—either as part of my programs or in articles I’ve written, but with more first-hand accounts from those who have had encounters at the lights I’ve chosen to feature. At least one chapter will focus on my own personal quest to “meet” the ghosts at one of the lights, an attempt that was unsuccessful but still provided a very unique opportunity to be at the top of a lighthouse until nearly midnight on a warm summer night in 2005.

Some of the ghost stories are commonly known, having been published in some variation in other forms. Some will shed new light on long-held believes about how certain keepers died. The ongoing research has been the most entertaining part, discovering new information or images that haven’t been published before. Luckily, I’ve been able to tap into my many resources around the state to help me dig for more information…including my dad who has been researching our family tree for as long as I can remember (now, I just have him looking for information on different families).

To date, I have about six chapters nearly complete with another three or four chapters started and piles of research organized in neat piles on my desk. I have a growing file on my laptop full of images of keepers, lighthouses, death certificates and newspaper articles, all of which will soon be organized into a tidy package as a published book. I can hardly wait!

If you have had an experience at one of Michigan’s lighthouses that you’d like to share with me, please feel free to drop me an email at Travel@PromoteMichigan.com.

For a sneak peek at some of these haunted stories, check out these articles:

And for articles on other topics, check out my online archives or for upcoming programs, check out the Speaker’s Bureau.