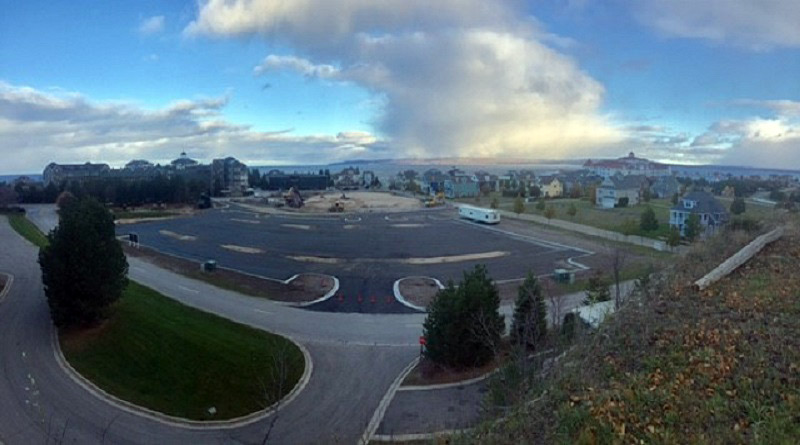 The Board of Directors of the Great Lakes Center for the Arts is thrilled to announce that construction has begun on the new performing arts venue.  Team Elmers recently completed the scheduled paving of the new parking lot after preparing the site and installing utilities for the future performing and cultural arts venue.

The Christman Company mobilized the week of October 24 with Petoskey resident Brad Kranig serving as Senior Project Manager.  Mr. Kranig shared his excitement at the rare opportunity to work on a building project of this magnitude in his hometown: “For years I have been traveling to other areas of the state to oversee commercial construction projects and am excited to be working in Petoskey.  Seeing this project come to fruition over the next two years will be very fulfilling.”

As a 501c3 non-profit in the State of Michigan, the independent Board of Directors is growing in number and geographic diversity.  Newly appointed directors include Bill Clements of Tyler, Texas; David Crouse of Walloon Lake, Michigan; Pamella DeVos of Ada, Michigan; and Annette Pocica of Charlevoix, Michigan.  Together they bring extensive board, non-profit and financial experience, as well as a passion for the arts and education.

The Great Lakes Center for the Arts will inspire, entertain and educate with year-round programming across all genres – theater, music, dance, film and movies, intellectual dialogue and education.  With a mission to serve as a cultural and social hub for Northern Michigan, the building will house a state-of-the-art 500 seat theater, a community engagement room for education and receptions, a rooftop deck and donor lounge.  The Center promises to enhance the lives of residents and visitors to the greater Northern Michigan region and strengthen a vibrant tourism industry.

According to Executive Director Jill O’Neill, over 82% of the Capital Campaign has been completed.  “The land on which the Center will stand has been generously donated by the developer of the Bay Harbor Community as a gift to the people of Michigan for generations to come. With over 200 workers who will be involved in building the Center, we are excited for the economic growth that will be an inherent part of a project of this size.  With Founding Artistic Director and Lead Strategy Consultant, Michael M. Kaiser, we are busily preparing all aspects of the Center’s programming, and look forward to our Grand Opening on July 7, 2018.”