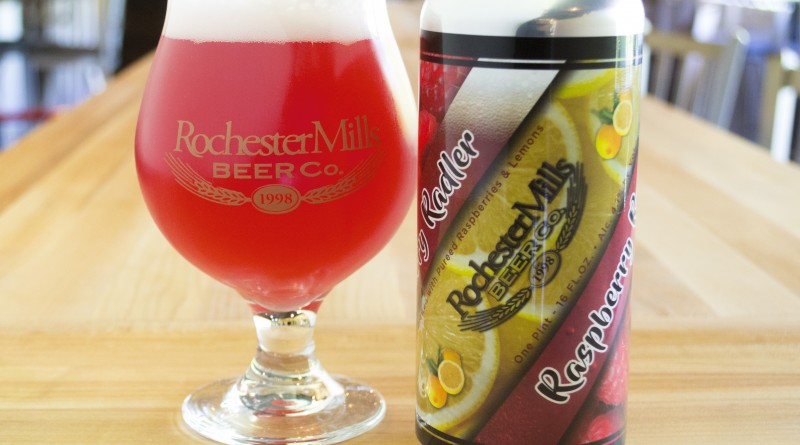 Rochester Mills Beer Co. & Production Brewery announce the 2017 release of Raspberry Radler, a summer beer brewed with pureed raspberries, lemons and fresh Michigan hops. Coming in at around 4% ABV, this is a Radler- or Shandy-style beer, with a refreshingly-tart yet sweet flavor, that pours deep pink with a bright white head.

First introduced as a seasonal draft release exclusive in the downtown Rochester brewpub, Raspberry Radler was overwhelmingly popular—selling out the first batch in just one week and prompting the brewing team to perfect the recipe for outside distribution. This year, at the Rochester Mills Production Brewery, the first 100-barrel batch shipped out in kegs with similar speed, which has led to increased production and for the Radler to be packaged in cans for retailers.

“The resulting demand has been phenomenal, far exceeding our expectations. Our phones have been ringing off the hook to make the beer available in cans as well,” says Mike Plesz, Founder of Rochester Mills Beer Co. & Production Brewery. “After the overwhelming feedback last year at the brewpub and the Michigan Brewer’s Guild Summer Beer Festival, we knew we had a hot beer on our hands. So, we ramped up production to release this beer across our entire distribution network.”

A recent investment in a centrifuge at the production brewery ensures better shelf life for this, and all of Rochester Mills packaged beer, while creating more pronounced flavors when enjoyed in 16-ounce aluminum cans. Supporters of canned beer say it’s not only better for the environment, but it’s more versatile in terms of where and how you transport it (including ease of disposing of empties). Cans also protect the beer from the damaging effects of light and oxygen, providing a better tasting product.

“This beer is ideal for hot Pure Michigan summer days spent drinking on the patio or poolside, at the beach or lake, on the boat, along the trails or at the golf course,” Plesz says. “Without question, Raspberry Radler is going to be THE beer of the summer, while enjoying outdoor activities in the Great Lakes region.”

Raspberry Radler is available now on draft and in 4-pack, 16-ounce cans across Rochester Mills’ full distribution network in Michigan (including the Rochester Mills Beer Co. in downtown Rochester and Production Brewery Taproom in Auburn Hills), and in select parts of Northern Ohio.

Note: A fall spin on the Raspberry Radler will be released after Labor Day. Details will be available soon.

ABOUT ROCHESTER MILLS BEER CO. & PRODUCTION BREWERY:
Rochester Mills Beer Co. has been one of the top producing brewpubs in Michigan since it opened in Rochester in 1998. The pub is a full-service restaurant and offers a diverse beer menu with 11 different styles of beer consistently available, as well as a number of reoccurring seasonal offerings.

The Rochester Mills Production Brewery, brewers of Rochester Mills Beer Co. brands for distribution, began as a startup brewery in Auburn Hills in 2012, quickly becoming one of the top craft beer producers in the state. Their Lagers and Ales packaged in 16-ounce aluminum cans are currently featured in grocery stores as well as independent and franchise convenient stores, and specialty beverage merchants statewide. Additionally, their core brands, which include Milkshake Stout, Pine Knob Pilsner and Rochester Red Ale, along with their rotating IPA series and seasonal offerings, can be found flowing from more than 1000 taps at bars and restaurants across Michigan and Northern Ohio.

More information can be found at: www.BeerCos.com.