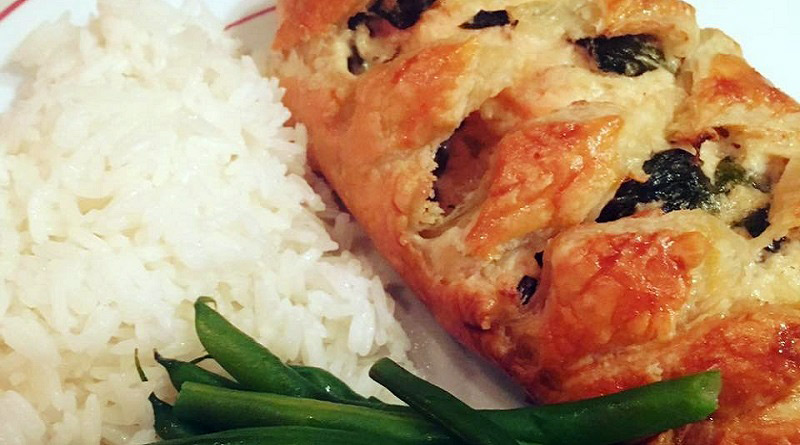 Once again, I had the pleasure of traveling around the state (and beyond, including two trips to California) to indulge on tasty appetizers, entrees, soups, salads and desserts. What I realized as I was flipping through my Facebook photos reliving these mouth-watering meals is that many of the dishes that were most memorable were ones I made at home (often, just for myself). Must be the passion from these inspiring chefs has rubbed off on me.

So, without further ado, here is my list of 16 Best Eats of 2016 (in no particular order, because really, they were all fabulous in their own way and some are elevated by the locale or the company in which I dined). 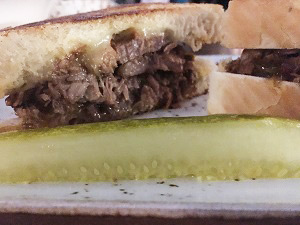 Texas Grilled Cheese – Mustang Wendy’s, Harbor Springs
The last item to make the list, enjoyed just prior to Christmas while listening to the music of Pete Kehoe while enjoying an evening with my dear friend Nick Nerbonne. Recommended by bartender Adam Slowinski (who makes a mean Fifth Rose smoked bourbon cocktail), this rich and savory sandwich featured beef brisket, bacon jam, melted cheddar and pepper jack cheese served on Texas toast (and paired with truffle shoestring French fries). It was one of those meals that you took your time with, tasting each mouth-watering bite and pausing in between because you don’t want the moment to end. 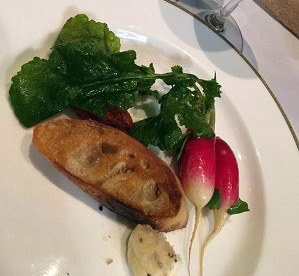 2. Radishes & Butter – Vander Mill Cider, Grand Rapids
Part of a 5-course “Pairing” meal at the Grand Rapids International Wine, Beer & Food Festival in November. Described as a simple lunch that a farmer might eat while taking a break in the field. A simple toasted piece of baguette, a dollop of herbed butter and two bright and crunchy radishes (complete with roots and greens), this light course was served with Chapman’s Blend Cider. 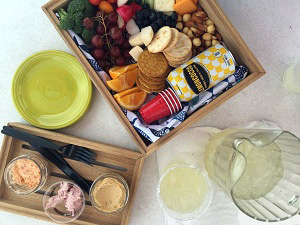 3. Picnic Basket – The Landings Restaurant, Ironton/Charlevoix
Who would think that a tray of meats, cheeses, fruit, nuts and crackers would make a list of “best eats” but it’s all in the presentation (and the location, sitting on a waterside deck on Lake Charlevoix and served with a pitcher of Margaritas and great conversation! 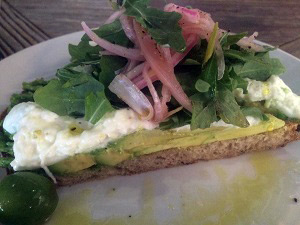 4. Avocado Toast – The Cook and Her Farmer, Oakland, California
While in California for my second business trip of the season, my daughter Mollie and I found a wonderful food court called Swan’s Market next to our hotel. Inside, more than half-dozen eateries offered a gourmet cafeteria style approach with a variety of cuisines. The avocado toast was a light and healthy option (allowing us to enjoy a progressive day of eating and shopping) and lead to my urge to recreate this recipe (in various forms) back home throughout the year. 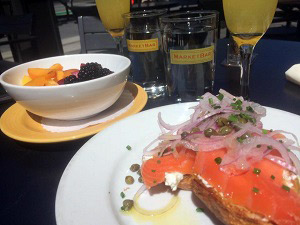 5. Gravlax – Market Bar, San Francisco, California
Also part of the mother-daughter trip, I enjoyed one of my favorite brunch items – gravlax with cream cheese, red onions and capers, along with a mimosa outside at the historic Ferry Market at Fisherman’s Warf. This was our first stop of our day-long adventure in San Francisco. 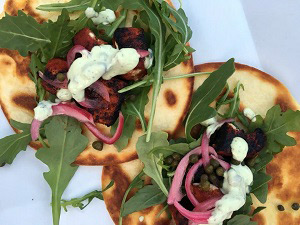 6. Blackened Fish Tostadas – Twisted Olive, Petoskey
One of my summer favorite spots – particularly on Friday nights when I could sit out on the patio and listen to my friend Chris Calleja play music. The nightly specials were always tempting (and tasty) but the menu staple that became one of my favorites was the blackened fish tostadas which I paired with Auxerrois from Bel Lago Winery on the Leelanau Peninsula (the only place I’ve ever found this treasured wine by the glass). 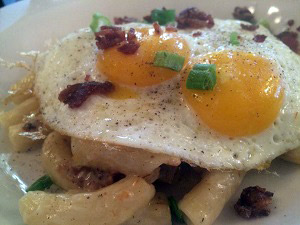 7. Mac & Eggs with Bacon – Zingerman’s Roadhouse, Ann Arbor
Believe it or not, this was my FIRST visit to any of the world-famous Zingerman’s locations. As a board member of the Downtown Market in Grand Rapids, we took a group trip to A2 to visit all the various and unique Zingerman’s businesses—eating all the way! This was the first meal of the day…and what a concept. Taking the comfort food of mac-n-cheese and topping it with fried eggs and bacon was over the top. It was one of those meals you wanted to bury your face in the plate! 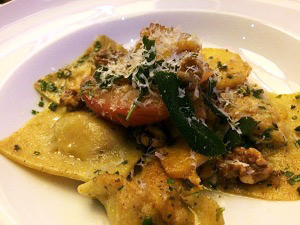 8. Chevre Ravioli – Six.One.Six at JW Marriott, Grand Rapids
Ravioli is one of my favorite meals, especially when squash is incorporated (with brown butter and sage, and chevre—one of my absolute favorite cheeses). This meal was enjoyed mid-February, which meant I was in town for the Grand Rapids Boat Show when the JW becomes my home-away-from-home. I even noted when I originally posted the picture on Facebook that this was “a serious contender for 16 Best Eats of 2016!” and even 10 months later, it holds a spot on the list. 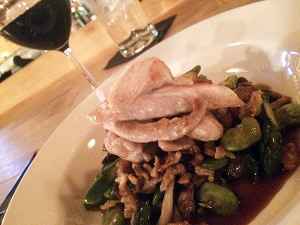 9. Rabbit Loin with Spätzle – Chandlers, Petoskey
It helps when you become friends with the chef and bartenders at the restaurants you frequent. I’d asked Chef Tommy several times throughout the spring if he was going to have rabbit on the menu any time soon, and in mid-April, my friend Rich Kleeman messaged me that I might want to stop in to see what Chef had whipped up. Not only was there rabbit with spätzle, but there was bacon and asparagus and wild leeks and mushrooms and…FAVA BEANS (one of my favorites…cue the creepy Chianti references from Silence of the Lambs). I actually paired this meal with a Malbec (and returned several times that spring for dinner, where I often ordered a side of fava beans). 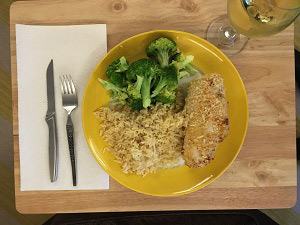 10. Chicken Kiev – That French Place, Charlevoix
The concept of take-out-only dinners is new to me. In downtown Charlevoix, there is a quaint little French creperie where you can find pastries, artisan ice cream, macaroons and other decadent treats. They also offer up complete French-inspired dinners to go. In early December, while staying in town on assignment, I put in an order for one of my childhood favorites: Chicken Kiev. Enough for two complete meals, this butter and herb stuffed chicken breast was lightly breaded and baked, served alongside brown rice and broccoli. Enjoyed in the comfort of my VRBO house in town, I paired it with a Michigan dry Riesling from Black Star Farms and views of Lake Michigan. 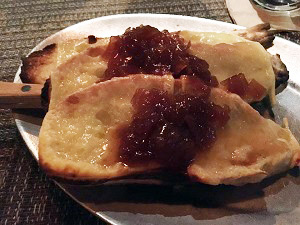 11. Raclette with Onion Jam – Principle Food & Drink, Kalamazoo
Whenever we go to Principle on the Kalamazoo Mall, it’s an appetizer free-for-all. Every time I’ve been there (with family or friends) this light snack is always ordered. I believe it’s just three simple ingredients: bread and sliced Raclette cheese broiled, then topped with onion jam. This (as well as all the featured appetizers and entrees) pair well with a classic cocktail, created by passionate bartenders. 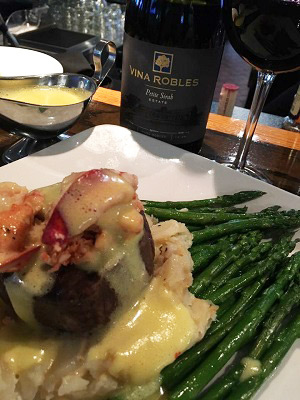 12. Surf & Turf (Wagyu Beef Oscar) – Vernales, Harbor Springs
Michigan’s Best Steakhouse delivers once again. A rare cut of Wagyu beef is a treat as a stand-alone dinner but top it with crab claws and drizzle it with an obscene amount of Hollandaise sauce and I’m in culinary heaven. My friends and family know that I will eat Hollandaise like it is soup, with it’s creamy buttery lemony flavor. I’ll eat it with steamed artichokes, asparagus, Brussel sprouts, eggs and, obviously, meat and seafood. 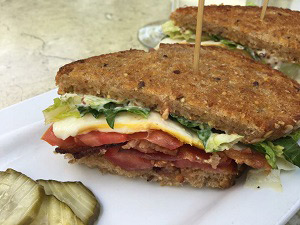 13. BLT with Egg – Palette Bistro, Petoskey
A BLT is always a good option on a breakfast, brunch or lunch menu but when you toss a fried egg on it, well, it’s elevated to the top of the list. And the toasted multi-grain bread from Crooked Tree Breadworks (which it turns out, is just a couple miles from my house). It was so good, that as soon as I left the restaurant I went right to the bakery and purchased a loaf to take home. 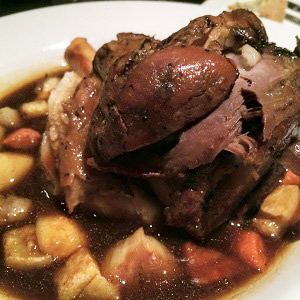 14. Braised Lamb Shank – The State Room at Kellogg Center, East Lansing
Early February means time for comfort food, and braised lamb always does the trick. Lie a delicious family roast complete with roasted carrots, potatoes and parsnips and a rich gravy this was three-meals-in-one (meaning, there was enough in one serving to last three dinners for me). This is also one of my favorite leftover bases to come up with something new at home…like Shephard’s Pie! 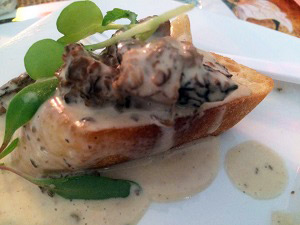 15. Morel Mushroom with Roasted Garlic & Madeira Cream – Beach House, Boyne Falls
In May, I was asked to judge the Boyne City Morel Festival Mushroom Recipe Contest. Little did I know, but I was in for an afternoon of more than a dozen samples and the nearly impossible task of picking a winner from some of the area’s most noted restaurants. The panel of esteemed judges and myself had a tough time coming up with a winner (and what I have chosen here was my own personal favorite – a nice blend of flavor, bread and presentation). Trust me, when they tell you to NOT eat every bite of every sample it’s for good reason. By the end of the contest, I was barely able to move but it all tasted so good! 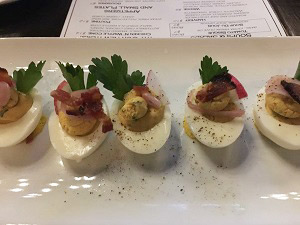 16. Deviled Eggs – The Public Pour House, Petoskey
This retro appetizer is making a comeback in a BIG way on menus around the state. So simple, yet so tasty with radishes (one of my favorites, see above #2), shallot, parsley, chive and…BACON!

And, of course, I should at least mention a few of my favorite made-at-home meals which this year included Salmon Wellington (twice), Vodka Cream Sauce (with regular appearances) and Avocado Toast (my favorite brunch treat for overnight guests).