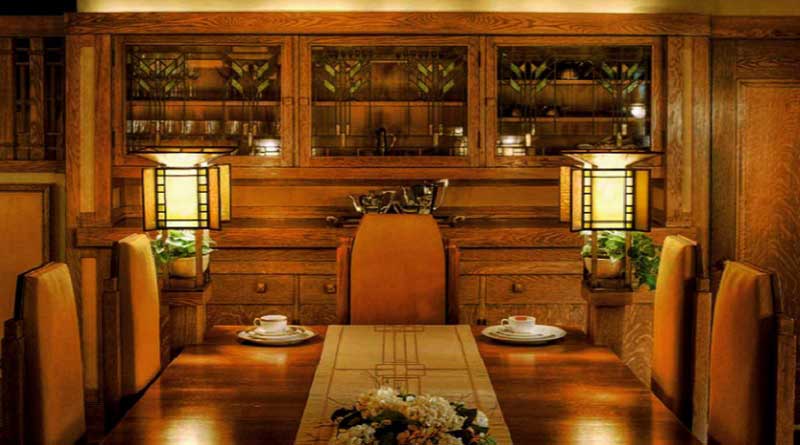 Perched on the northeast corner of Madison and Logan streets in the Heritage Hill District – behind a well-manicured bordering hedge – sits one of Grand Rapids’ most unique homes. This gem is known as the Meyer May House, after clothier Meyer May who in 1908 commissioned acclaimed Chicago architect Frank Lloyd Wright to design and build this 3,600-square-foot “Prairie Style” family dwelling.

With distinct horizontal lines, creamy layered brick and colorful stained glass windows, the fortress looking house features a full basement and two floors in a T-shaped configuration. Entering off the back driveway (sans garage), the intimate stairway winds around to the first floor where the true impact of Wright’s design comes to life.

It’s hard for the eyes to decide where to focus first. The living room boasts a massive fireplace, built-in bookshelves and custom furniture while the highlight of the dining room is a 10-seat table with corner planter lamps and high-back chairs. A floral watercolor mural wraps the dividing wall between the foyer and the dining room, while towering windows at every turn bring views of nature inside. The front door opens onto a large covered portico, oddly void of steps or to access the yard.

Upstairs, the bedrooms, sitting room and hallway are found under four-sided vaulted ceilings reminiscent of the inside of a tent – giving air to the space. Servants rooms are found at the back of the house, where staff would have been close enough to care for the May’s adoptive children.

After the Meyer May died in 1936, the home sat vacant before being sold in 1942 and again in 1945 – during which time the original integrity of the house was jeopardized. A carport and two apartments were added to the back of the house, in addition to structural changes inside the foyer – including the covering of the delicate mural. When the Steelcase Corporation purchased the home in the 1980s, it began the process of restoring the landmark to its original grandeur. That included tracking down, repairing or recreating the roof, furniture, wall coverings, flooring and more – turning the Meyer May House into one of the state’s top architectural treasures.

For Ben Darcie, his fascination (or as he calls it, obsession) with Wright’s works can be attributed to a high school assignment about the artist. He was instantly hooked, yet it would take more than a dozen years of living in Grand Rapids before he would make his way inside the Meyer May House.

“I’ve spent the last 15 years of my life obsessing over his work, and in turn, exploring others, but there’s just something about Wright,” Darcie notes. “Originality, ingenuity, instinct? I’ve pondered it for years and have never quite been able to put my finger on his essence – maybe that is the beauty of it.”

Free guided tours of the Meyer May House are offered every Tuesday and Thursday from 10am to 1pm and Sundays, from 1-4pm.

While in the area be sure to walk through the Heritage Hill area – the city’s oldest residential neighborhood and one of the largest urban historic districts in the United States, with nearly 60 unique architectural styles represented. The Annual Heritage Hill Weekend Tour of Homes is May 16-17, featuring seven private homes and two public buildings. Tickets are $18 in advance and $25 the weekend of the tour.

During his career, Wright built only 31 homes in Michigan and just a handful are open for tours or overnight stays.

The Affleck House at 925 Bloomfield Woods in Bloomfield Hills was built in 1941 for Elizabeth and Gregor S. Affleck – the first Wright-designed home built in Metro Detroit. The 2,359-square-foot Usonian-style home was donated in 1978 by the Affleck children to Lawrence Technological University and the College of Architecture and Design as an educational resource meant to inspire new generations of architects. Listed with the National Register of Historic Places, the Affleck House is open for seasonal monthly tours, as well as private business and educational events.