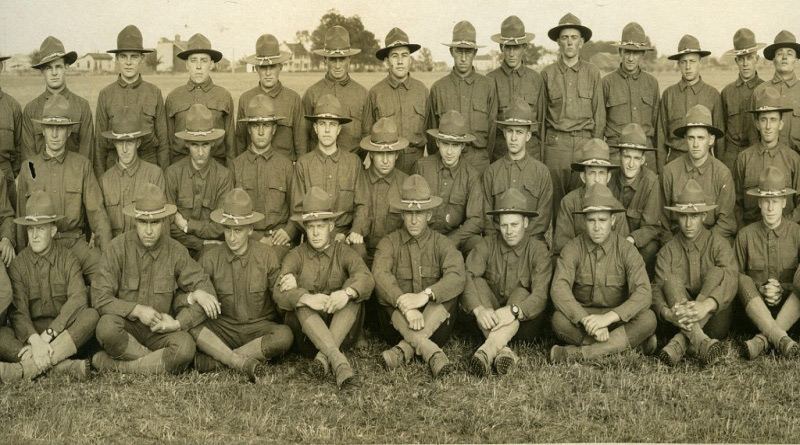 For the past three-and-a-half months, the community of Chelsea in northwest Washtenaw County, has proudly displayed 36 unique banners throughout town as part of the historic interpretation installation World War I Centennial: Strong Foundations, New Possibilities.

The exhibition runs through Veterans Day—Friday, November 11. That afternoon, between 2-3:30 pm, a drop-in musical program will be held at the Chelsea Comfort Inn at 1645 Commerce Park Drive, south of downtown. The summer of 1914 was calm and idyllic, but an assassination in Sarajevo would drag many nations into a war unprecedented in world history. Radio was still a few years off as a source of public entertainment, but the phonograph was in its heyday and songs were composed to encourage people to join the war effort as well as to protest it. Join us to review a little history of The Great War, hear some of these records, and remember the artists who made them.

Coordinated by the Chelsea District Library and in collaboration with the Chelsea River Gallery, the installation commemorates the centennial anniversary of WWI and is made possible in part by a grant from the Michigan Humanities Council, an affiliate of the National Endowment for the Humanities as well as the Chelsea Chamber of Commerce Tourism Action Plan Program (CTAP), through Washtenaw County Convention and Visitors Bureau.

Several WWI-era photographs, letters, stories and artifacts including a helmet, binoculars, sword, riffle, medals, journal, uniform and more from local residents, are also on display inside the Chelsea District Library. Maps for self-guided tours are available free for those who wish to explore the exhibit on their own. Private guided group tours can be made, with prior arrangement.

Each of the 36 banners and their respective stories have also found a digital home at MapMe—a publishing platform that allows stories to be shared through maps and images. As part of MapMe, each site includes a photo, address and interactive map that shows visitors exactly where the banners are in relation to each other. Enjoy this digital tour here. Additionally, for a chance to learn more about the soldiers in these photos and their families, visit www.StoriesOfChelsea.org to see photos not used in the installation, read letters and hear audio recordings of current Chelsea residents sharing stories about their families during The Great War.

Those who have visited Chelsea to view the installation, or attended any of the events are encouraged to complete an online survey here.