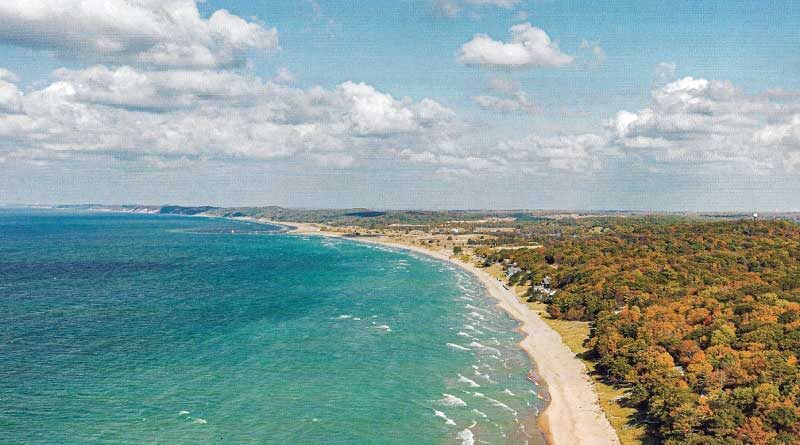 Well before the official Lake Michigan Circle Tour route was established in 1987, travelers have been looping around the largest lake contained entirely within the U.S., the third largest of the Great Lakes, and the fifth largest lake in the world (by surface area).

Chicago architect Daniel Burnham — for whom that town’s lakefront Burnham Park is named — appears to have been the first to verbalize the idea of creating a recreational trail around Lake Michigan, starting with the waterfront area in the Windy City.

As chief of construction for the 1894 World’s Columbian Exposition of 1893, he transformed the city’s waterfront into a global showplace. His 1909 Plan of Chicago “envisioned a park boulevard along Chicago’s lakeshore that would bypass the city center and provide a relaxing scenic drive for residents to enjoy views of a great city and lakefront park.”

As early as 1913, the Michigan section of this tourist route was known as the West Michigan Pike, stretching for the near entirety of the 356.5-mile-long U.S. 31, which was officially established in November 1926.

The Pike, as it was affectionately called back then, was a historic trail that drew national travelers to explore scenic shoreline towns from the Indiana state line north to Mackinaw City. In 2016, this route became one of the state’s Pure Michigan Byways, further solidifying its place in tourism history.
Route Background

One of the earliest references to a (970-mile) Lake Michigan Circle Tour was in the 1927 issue of The Record newspaper from Hackensack, N.J., a full 30 years before the Mackinac Bridge was opened to connect Michigan’s Upper and Lower peninsulas. Several papers picked up the wire service story about this Great Lakes excursion, introducing travelers around the country to the unique trip (which is, in fact, 1,100 miles, through four states).

In the late 1940s, Greyhound began offering a five-day trip around Lake Michigan for just $34.80; by 1956, the trip had expanded to eight days for a mere $103.08. Throughout the following decades, tour operators began adding this mostly rural route to their itinerary catalogs for individuals and groups looking for a freshwater coastal excursion.

A 1963 issue of The Escanaba Daily Press also made note of the influence that circle tour routes could have, specifically for the Upper Peninsula. “There is also evident a developing traffic in a Lake Michigan circle tour,” said Dr. Frank Suggit, a development planner who addressed members of the Upper Michigan Tourist Association in Marquette that fall. “Many persons in the Lower Peninsula are going to Chicago and then up through Wisconsin to the Upper Peninsula.”

After Michigan’s then First Lady Paula Blanchard successfully established a circle tour route around Lake Superior in 1986, talks quickly focused on Lake Michigan — the only one of the Great Lakes located entirely within the U.S. One of the leaders of this initiative was Jack Morgan, of the Michigan Department of Transportation, who worked with former State Rep. Mickey Knight of Muskegon and tourism leaders from throughout west Michigan to bring the idea to fruition.

Working Together
The transportation departments from the four Lake Michigan states — Michigan, Wisconsin, Illinois, and Indiana — worked quickly to establish the route. The plan came together in about six weeks, according to a 1987 article in The Times of Munster, Ind. The announcement of the formal agreement was made during National Tourism Week, May 18-23, 1987.

“The creation of the Lake Michigan Circle Tour is a good example of how governments should work,” Mickey Knight says, 35 years later.  “(It was) a bipartisan, multistate cooperative process with a beneficial result for citizens. Jack Morgan was the catalyst and coordinator who put together — and held together — this coalition and made it work.”

An Associated Press story appeared in a variety of newspapers in 1987 reporting that 469 signs had been erected along 600 miles of the route in Michigan alone. Each state was responsible for making and paying for their own signs, which at the time cost just $50 each.

“The rule of thumb was to sign the continuous state trunkline closest to the shoreline,” says Jack Morgan, who in 1987 was the assistant to the chief deputy director of the transportation department.  “The green logo sign was to be placed before and after each turn in the route, and at least (within) every 10-mile interval. In addition, local governments could place brown logo (spur route) signs to promote local routes closer to the shoreline.”

Once the Lake Michigan Circle Tour was formally introduced, it was time to focus on marketing this motor route. The West Michigan Tourist Association, formed in 1917 and today recognized as the oldest continually operating regional tourist association in the country, was contracted to develop the first tour-related publication.

Printed Guide
In 1988, the inaugural 52-page Lake Michigan Circle Tour Guide was released. It contained information about more than 220 travel-related businesses in more than 90 cities.

The West Michigan Tourist Association distributed a media release about its new publication, with coverage appearing in newspapers from Grand Rapids and Detroit to Texas, New Mexico, and even as far away as Hawaii.

But it was a short news brief in a 1988 issue of the Chicago Tribune that put the guide on the map. On the Monday after the brief appeared, 150 callers from the Chicago area alone requested the new publication. Two days later, an overburdened mail carrier unloaded 700 requests for the guide from people in Illinois and Wisconsin. The next day, more than 1,000 mail and phone requests poured in.
On its 10-year anniversary in 1998, the expanded guide was rechristened the Lake Michigan Circle Tour & Lighthouse Guide, featuring an index with details about each of the 100-plus lights. An online version of the guide was introduced in 2001 on wmta.org, and in 2007, the guide was again reformatted into a large fold-out map and index.

Promoting the Lake
“The West Michigan Tourist Association has been publishing the circle tour and lighthouse map since the beginning of the route, and it remains one of the most popular publications that we produce,” says Dan Sipple, the nonprofit organization’s CEO and executive director. “It can be viewed online at wmta.org, where visitors can also request a printed copy to be mailed out.”

For generations now, travelers have discovered a wealth of cultural treasures along the Lake Michigan Circle Tour. Some travel by personal vehicle, others load up their RV for a camping excursion, motorcyclists find it an enjoyable and scenic ride, and bicyclists can discover a one-of-a-kind endurance trip through mostly rural areas, with a handful of urban centers like Chicago and Milwaukee mixed in.

Those wishing for a shorter route may opt to cut across Lake Michigan between Ludington (Michigan) and Manitowoc (Wisconsin) aboard the historic Lake Michigan Car Ferry the SS Badger, or between Muskegon (Michigan) and Milwaukee (Wisconsin) aboard the Lake Express. These cross-lake options also provide unique routing options to shake things up a bit.

“I’m proud to have been part of creating the Lake Michigan Circle Tour and hope that it’s a legacy that will live on for many more generations to enjoy,” Morgan says. “In today’s technology-driven world, it provides a great opportunity for people to disconnect and enjoy some of the unique splendor Lake Michigan has to offer.”

PLAN IT!
Lake Michigan Circle Tour
For a map and itinerary tips, visit wmta.org and search for the circle tour.

Reprinted from the fall 2022 issue of Michigan BLUE magazine.