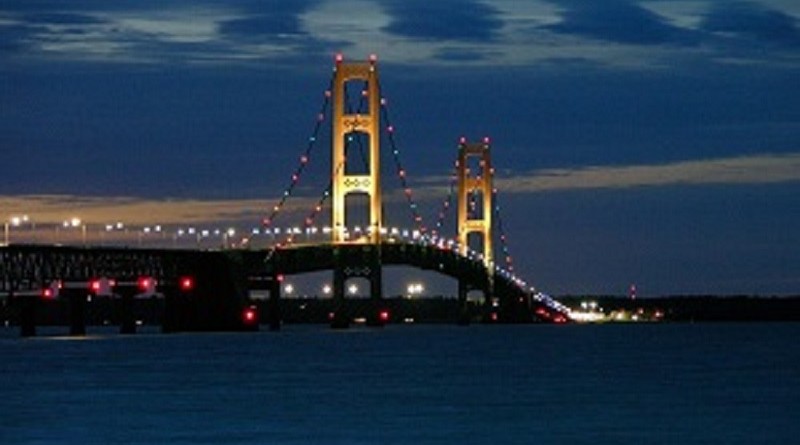 Michigan in home to countless noted bridges – the most famous being the “Mighty Mac” which connects the Lower Peninsula in Mackinaw City with St. Ignace in the Upper Peninsula. Built in 1957, this modern marvel attracts thousands of visitors each Labor Day (and Memorial Day) to walk the five miles over the Straits of Mackinac in what has become a time-honored family tradition.

Last year, I crossed the Mackinac Bridge Walk off my bucket list. I’m not sure why it took so long, since so many members of my mom’s side of the family have made the trek (time and time again). In fact, I ran into a cousin and his wife while waiting for the walk to begin.

I guess it is a fear of heights that kept me off one of the largest suspension bridges in the world – and this was reinforced several times as the bridge swayed back and forth during the walk. Despite my fears, and my apprehension, I am happy to say that I took that first step (and all the others) – and admittedly I am likely to participate in the walk again in the future. 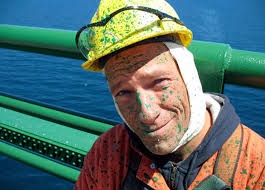 Did you ever see the episode of Discovery Channel’s Dirty Jobs with Mike Rowe – where he scaled the cables of the bridge to change a bulb at the top (after being below the water’s surface inside one of the towers, scraping away paint as part of bridge maintenance)? It’s a pretty interesting segment – you can check it out here.

Here’s a little tidbit of information for you – the first public car to cross the Mackinac Bridge – a 1951 Chevrolet Styleline Deluxe driven by Albert Carter of Chicago – is on display inside the Grand Rapids Public Museum. You can read more about it here on Mlive. 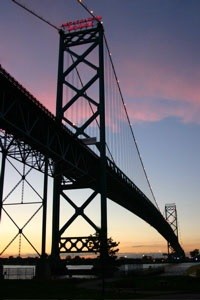 When it opened on November 11, 1929, the 2.286-mile Ambassador Bridge – connecting Detroit with Ontario, Canada – was the longest suspended central span bridge in the world. Today, it is the #1 international border crossing in North America in terms of trade volume – with more than 25% of all merchandise trade between the two countries crossing this bridge.

The four-lane bridge carries more than 10,000 commercial vehicles on a typical weekday, including 60-70% of commercial truck traffic in the region. It is owned by Grosse Pointe billionaire Manuel “Matty” Moroun through the Detroit International Bridge Company in the US and the Canadian Transit Company in Canada. 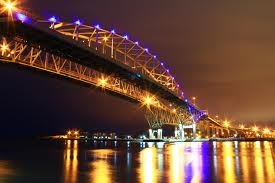 The 1.883-mile Blue Water Bridge was opened on October 10, 1938 – connecting Port Huron to Sarnia, Ontario, Canada – crossing the St. Clair River. The original bridge was renovated in 1999, and boasts three westbound lanes. The second bridge – which carries three lanes of eastbound traffic – was opened in 1997 (at a cost of $41.3 million…for the Michigan half). Together, the two bridges are the second-busiest crossing between the United States and Canada (behind the Ambassador Bridge). Daily traffic on this bridge exceeds 14,000 vehicles!

The centerpiece of the New Richmond Bridge Park is, of course, the bridge itself. Located in the northwestern part of Allegan County in a quaint historic village, the 400-foot, fully-restored swing bridge spans the Kalamazoo River and is one of the oldest bridges of its kind in the nation. Originally built in 1879, it was restored in 2004 and is listed with the National Register of Historic Places.

Michigan is also home to a dozen or so historic covered bridges (although sadly, we lost one – the Whites Bridge near Ionia – earlier this year to arson). In early days, builders thought it was easier to climb atop bridges to replace roof shingles than it was to get into the water to replace floorboards and thus “covered bridges” were born.

The Fallasburg Covered Bridge graces a park where the “ghost town” of Fallasburg still stands, just five miles from Lowell in Kent County. This 100-foot-long white pine bridge – the last bridge in West Michigan open to vehicular traffic – was built over the Flat River by Jared N. Bresee in 1871 and is listed on both the Michigan State and National Register of Historic Places.

Nearby, the Ada Covered Bridge – also known as the Bradfield Bridge – was originally built in the 1860s over the Thornapple River. Currently maintained by the Kent County Park System, this 125-foot bridge is open only to pedestrian traffic and is listed with the Michigan State and National Register of Historic Places.

The Donald F. Nichols Covered Bridge is a highlight of the Kal-Haven State Park, which stretches for 33 miles from Kalamazoo to South Haven. The bridge, rebuilt from an existing railroad trestle bridge, spans for 108 feet over the Black River and is accessible to walkers and bicyclists. 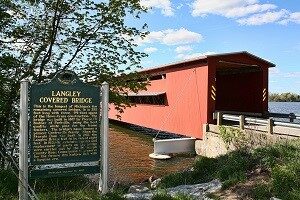 At 282 feet, the Langley Covered Bridge near Centreville is Michigan’s longest covered bridge (and one of the longest in the nation). Built in the fall of 1887, it crosses the St. Joseph River and is open to automobile traffic. The bridge is listed with both the Michigan State and National Register of Historic Places.

Fisher’s Bridge stands on a beautiful trail in Isabella County’s Deerfield Park six miles west of Mt. Pleasant. Originally built in 1968 and rebuilt in 1996 to replace the bridge destroyed by fire in 1995. It is used only by hikers, cyclists and park vehicles.

In 2000, the Reed City Covered Bridge was constructed along the 92-mile White Pines Trail Linear State Park and crosses the Hershey River. The trail and the bridge are maintained by the Michigan Department of Natural Resources, while the “Reed City” sign on the bridge was repurposed from an old railroad depot in town.

The Historic Bowen’s Mills Covered Bridge in Delton is located to the south of the mill structure and was designed and built in 1982 by the first generation miller, Neal H. Cook. It is a quaint scale replica of the covered bridge that crossed the Thornapple River in Middleville years ago, made out of wood donated from the old Middleville Mill. Adjacent is a 17-foot water wheel and an 1864 Grist Mill.

The 32-foot Augusta Creek Bridge was originally built in 1973 and was hidden away on private property owned by William John Upjohn. In the 1990s, the land and the bridge were purchased by the Michigan Department of Natural Resources and in 1999, the bridge was relocated just 2.5 miles south of its original location, sitting near the entrance of the W.K. Kellogg Forest.

The 239-foot Frankenmuth Holz Brucke (Covered Bridge) spans the Cass River in Frankenmuth, connecting the Bavarian Inn Lodge and the community’s festival grounds. Construction began in 1979 on the $1.1 million, 230-ton bridge – which has only 1000 pounds of non-wooden material, including nails to secure the 25,000 wooden shingles. The bridge was dedicated on September 9, 1980. 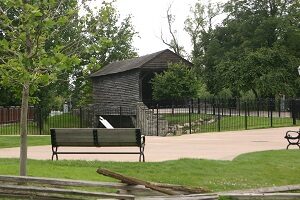 The Ackley Covered Bridge was originally built in 1832 over Wheeling Creek between Washington and Greene counties in southwestern Pennsylvania by Joshua Ackley & Daniel Clouse in 1832 on land owned by the Joshua Ackley family. After years of neglect and disrepair, the 80-foot bridge was acquired by Henry Ford in 1937. Gently dismantled, the bridge and all its pieces were trucked 300 miles to Greenfield Village in Dearborn where it remains standing today. 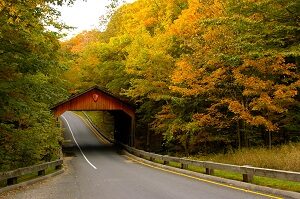 The Pierce Stocking Covered Bridge is the highlight of the 7.4-mile Pierce Stocking Scenic Drive, located in the heart of the Sleeping Bear Dunes National Lakeshore. Built by Stocking himself in the 1960s, the bridge was reconstructed in 1986 after being consumed by porcupines.

Want to learn more about Michigan’s covered bridges? Encourage your local library, historical society or organization to host a presentation of “Bridge to Michigan’s Past”. Program details are available in the Promote Michigan Speaker’s Bureau.