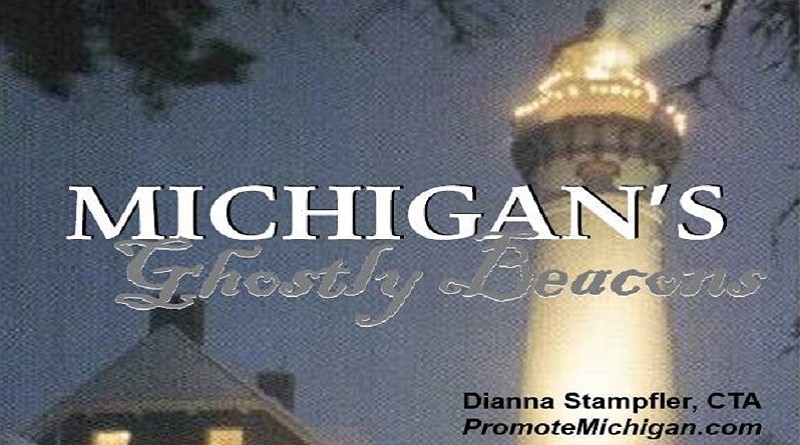 I’ve been fascinated Michigan lighthouses since 1997, when I started working at the West Michigan Tourist Association (1997-2004). Did you know Michigan has more lighthouses than any state? And, that a fair number of those are rumored to be haunted? Although I’ve never experienced any of these ghostly encounters myself, I’m happy to share the stories that have been passed along to me by others. If you’d like to learn more about “Michigan’s Ghostly Beacons,” I invite you to attend one of my upcoming presentations on the topic. The schedule can be found here.

What is it about lighthouses that seem to attract spirits – most often than naught, the ghosts of former keepers? Maybe it’s a never-ending passion for what was more of a lifestyle than a job. These keepers often lost their lives during their service, protecting the sailors on the inland seas from the dangerous and rocky shores of the Great Lakes. Many served twenty, thirty, even forty years and beyond, raising their families along these freshwater coastlines, because it was the only life they knew.

Here in Michigan, we’re proud to claim more lighthouses than any other state – with 117. The first light was built here in the 1820s; the latest in 2006. Nearly two dozen of these lights are rumored to be haunted – in most cases, by former keepers or their families. Their spirits live on, dedication unfaltering – even after the lights, and their lives, have been extinguished.

When William Robinson and his wife, Sarah, first came to the Whitehall area in the 1860s, there was no lighthouse at the end of the White River to guide the many boats coming and going due to the area’s rich lumbering industry.

Robinson took it upon himself to walk the riverbank nightly and hang a lantern on a pole, marking the entrance to the river for those vessels coming in after dark. He also began the drawn-out process of commissioning the Lighthouse Service to have an actual lighthouse built at the site.

After several years, Robinson’s attempts were rewarded and in 1875, the White River Light Station was first lit. The ships captains, who had been coming in and out of Whitehall for those years under Robinson’s safe guidance, petitioned the service to have him appointed the first keeper. It was a position he held for 44 years, until 1919 when age forced him into retirement. The day before he vacated the light, Robinson passed away in his sleep.

Rumor has it that neither he, nor his beloved wife – who had died many years prior – have ever really left White River Light Station.

The current resident keeper, Karen McDonnell, has reported multiple ghostly occurrences in her 20+ years of service. Content that it is the Robinsons, she simply shares the stories with visitors to the museum. Captain Robinson is frequently heard walking around upstairs in the former bedrooms and lantern room.

It’s Sarah’s spirit that is a bit more interesting. Karen says one day, she’d been upstairs dusting the museum display case when the phone rang. She set her dusting supplies down and went down to answer the phone. When she returned a short time later, she was startled to find her dusting supplies had moved and the display case was void of dust. Knowing of Sarah’s reputation as a meticulous housekeeper, Karen was amused. Over the years, Karen reports that attempts to recreate that incident have only succeeded on that original display case in an upstairs room which once was the nursery. A place Karen believes Sarah holds dear to her heart.

Captain Joseph Willy Townshend was an avid cigar smoker, and it is widely believed that his death in 1910 was the result of lung cancer. The fact that his body was embalmed in the basement of the keeper’s home and that his body lay in state for an extended period of time awaiting family from far away to pay their last respects, probably didn’t do much to help ease his mind as he left this world. So much so, that he opted to stay and keep watch on his majestic beacon.

The Gulliver History Society, which maintains this lighthouse, has kept detailed records of each ghostly occurrence at the lighthouse. Whether it be sight, sound, smell or just an eerie feeling, each is recorded in a log book which has more than 300 entries thus far. Faces in mirrors, the pungent odor of cigar smoke, rocking chairs moving on their own, pictures with hazy figures, images in windows – these are all common at Seul Choix (Shish-Shwa).

One of the most commonly told stories begins when the alarm at the lighthouse goes off in the middle of the night, sending an emergency call to both local law enforcement and the head of the historical society. The officers arrived first, and access the situation by walking around the lighthouse checking for any foul play.

One officer reportedly heard the sound of a chair moving across the floor and a man’s voice coming from the kitchen. When this account is shared with the museum administrator, it is met with a chuckle and a brief history of the resident ghost. Inside the house, no one is found – however, one of the kitchen chairs is pulled away from the table. The lighthouse is locked up and all parties depart.

A few weeks later, the scene repeats itself. The same two officers, the same museum staffer. Again, no one is found inside. The lighthouse is locked up tight and everyone heads out.

As the squad car makes its way down the long, dark, narrow roadway, it is approached by an oncoming car. Curious as to why anyone would be headed to the lighthouse at such a late hour, the police turn on their lights and exit their car to investigate. The oncoming vehicle is full of drunken teenagers, who are subsequently believed to be responsible for a series of break-ins and vandalizing acts in the area (one on the night of the original tripping of the alarm).

Turns out Captain Townshend was watching out for his lighthouse, making sure authorities were there to prevent any damage from occurring.

Saginaw River Range Light, Saginaw (Lake Huron)
When Peter Brawn was appointed the eighth lighthouse keeper at Saginaw River Range light in March, 1866, little did he know that his tenure would be short-lived. The next year, Peter suffered an unrecorded injury or disease and became incapacitated as a result.

His wife, Julia, took over the duties on an unofficial basis. In March 1873, Peter finally succumbed to his illness and passed way. Ultimately, Julia was finally appointed the official keeper after serving seven years in an interim position.

In 1875, Julie remarried – a man named George Way, who in addition to the title of her husband was appointed head keeper, with Julia demoted to serving as assistant. By 1882, the assistant position was abolished all together and Julia was left with no official title or duty. The following year, George himself passed away. However, before Julia was able to resume her duties as head keeper, she disappeared from lighthouse service – never to serve again.

While there is no proof that Julia actually had anything to do with the deaths of her two husbands, it is quite a coincidence that any time she lost her position as head lighthouse keeper the husband lost his life. Rumors of ghostly occurrences at this light are attributed to the two former keepers who died there, whether of natural causes or at the hands of their wife, Julia Brawn Way.