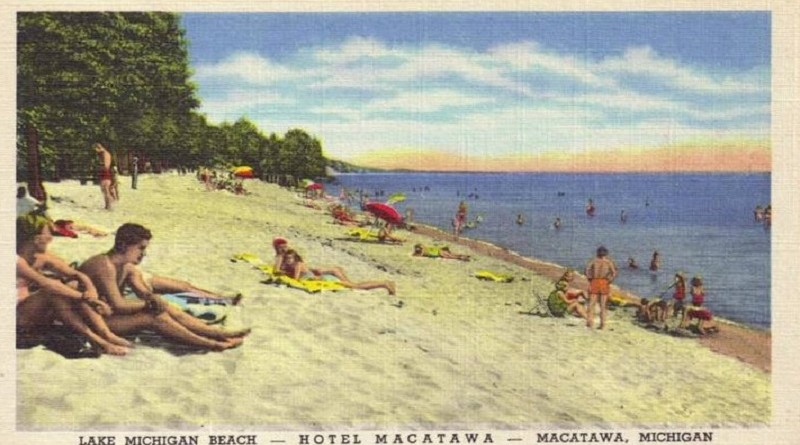 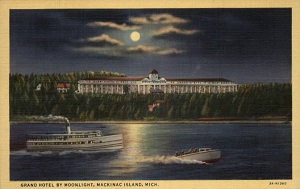 The earliest known picture postcard was a hand-painted design – posted with a “Penny Black Stamp” in London, to the writer Theodore Hook in 1840. The Penny Black was the world’s first adhesive postage stamp – issued on May 1, 1840. Displaying a portrait of Queen Victoria, it was primarily back in color and was one cent – thus, it became known as the Penny Black.

It was nearly two decades later before the first commercially-produced postcard was printed. In 1861, John Charlton of Philadelphia patented a postal card – later transferring the copyright to H.L. Lipman. Adorned with a small border and labeled “Lipman’s Postal Card, Patent Applied For,” these cards were available in the marketplace until 1873 when the first government postcards appeared. It was at that time that the earliest-known exposition card was issued – showing the main building of the Interstate Industrial Exposition in Chicago. 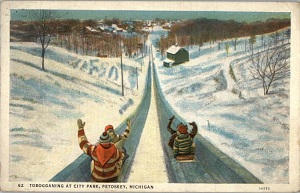 By 1893, “Souvenir Cards” were introduced for the Columbian Exposition, making them the first widely-distributed, privately-printed picture postcards in the United States. Also known as “Pioneer Era” cards, they required a higher postage of two cents (while government “postal” cards were mailed for just one cent with a pre-printed stamp featuring a bust of either Jefferson or Grant). The United States Postal Service was the only organization allowed to print “postals” – that was, until May 19, 1898 when Congress passed the “Private Mailing Card Act” which dissolved the distinction between privately-printed cards and government postal cards. The words “Private Mailing Card” were, however, required to be printed on all cards not issued by the government. 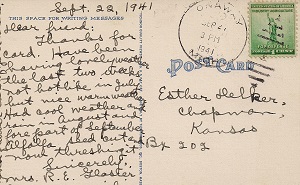 The earliest postcards featured undivided backs, because – by law – personal messages were not permitted on the address side of any postcard. That meant that all messages were written across the front and often over the photographs or artwork on the cards. In early 1907, a divided back introduced, meaning messages became more detailed and no longer defaced the front of the card. Collectors use this change in format to help identify when a specific postcard was printed (along with the specific postmark and stamp identification).

By 1907, Europe – primarily Germany – supplied the United States with 80% of its postcards. Sending and ultimately collecting postcards peaked between 1907 and 1913. Official US Post Office figures for the year ending June 30, 1908 revealed that nearly 680 million postcards were mailed in this country. By 1913, that number rose to nearly 970 million. Postcards, according to an August 1947 article in Coronet Magazine, was identified as a “Great American Pastime.” 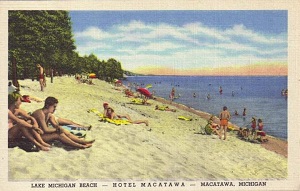 My fascination with postcards probably started during my adolescent years, as both my father and paternal grandmother were collectors. My dad, a dedicated genealogist, primarily collected cards from our hometown of Plainwell. My grandma gravitated toward holiday themed cards, adorned with lace hearts, glittery snowscapes and the like.

Fascination turned toward collecting about 10 years ago, when I found myself spending hours in the postcard section at antique fairs and shops – seeking out images reminiscent of Michigan’s early tourism years. It was about this time that I also met two of the most passionate Michigan memorabilia collectors – M. Christine Byron and Tom Wilson, authors of the award-winning Vintage Views series of Michigan coffee table books (see “Sharing a Collection of Michigan’s Vintage Views” from the summer 2011 issue of Michigan HOME & Lifestyle Magazine). Chris and Tom inspired me to seek out those postcards that “spoke” to me – both with picturesque images and the heartfelt messages. 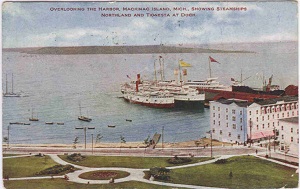 My casual collecting was amplified in the summer of 2010, when I was laid up on the couch all summer long with a broken ankle. I found a way to pass the time – scouring eBay for postcards to add to my collection. Within just three months, I had amassed close to 200 cards – all of Michigan travel destinations. I compiled them in my Facebook album and created a new program for my speaker’s bureau, called “Postcards to Michigan’s Past.”

Admittedly, my collection may not appeal to true collectors. I’m less concerned with where the card was printed or who took the photograph, and more drawn to the images that draw me in. There are common themes – waterfronts, boats, historic sites, agricultural images and structures such as lighthouses, covered bridges and one room schools. 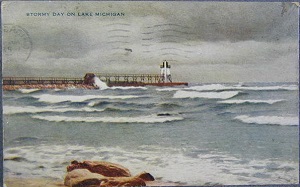 Postcards with splashes of red often get my attention – it is my favorite color, after all. Cities – especially those along the Lake Michigan shoreline – are of particular interest as well. I seek out cards that tell me a story about my favorite place: Michigan! The bottom line with my collection – and yours, if you are a novice or professional collector – is to select those cards which evoke some type of memory or emotion. That’s what makes it personal!

To learn more about postcards and the postal service in general, visit the Michael W. Schragg Post Office & Postal Museum in Marshall.