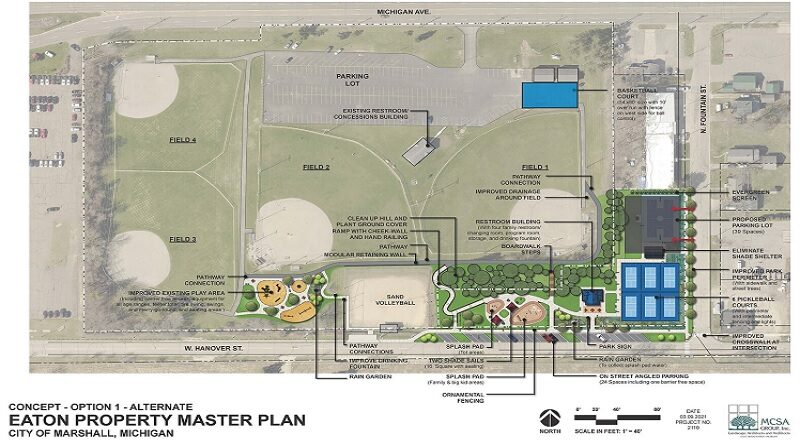 The city of Marshall has embarked on a fundraising campaign to raise money to convert a 1.6-acre parcel immediately south of its current Athletic Fields complex into a new community area called Eaton Park. The space, at the intersection of Hanover and Fountain streets, was previously a parking lot for the former Eaton Corporation. The building was demolished in the early 2000s and the land was donated to the city in 2020. Marshall, the county seat of Calhoun County with a population of 6,822, maintains nine additional parks and a riverwalk which are accessible to locals and visitors alike.

A community survey conducted as part of the city’s five-year parks and recreation plan was the catalyst to this park plan which calls for eight fenced and lighted pickleball courts, a splash pad, pavilion, upgraded ADA-accessible playground, four unisex restroom facilities and 39 parking spaces. The $3 million project will be completed in phases, starting with the pickleball courts, which is expected to begin in 2023.

“We have just started our private fundraising campaign, so we’re very happy with the amount raised to date,” says Eric Zuzga, Director of Community Services for the City of Marshall. “We will be working with area companies and individuals over the next few months to ensure we can move forward with the project.”

As Marshall doesn’t have the capital funds to allocated toward park development, city officials are relying on grants as well as corporate and individual donations. To date, over $666,500 has been collected including $600,00 from the Cronin Foundation, $50,000 from the Marshall Community Foundation and $16,500 from companies and individuals

“On behalf of all who have been playing pickleball at various old private tennis courts made into pickleball courts the past four years, we are excited to take the play up a notch and introduce the game to more Marshall area residents – young and old alike,” says local resident Barb Rosene. “We are so very thankful to Eaton Corporation and the City of Marshall for helping make this all happen.”

Pickleball may be the fastest growing sport in America, but this court-based game – a cross between badminton, tennis and ping-pong – was actually invented in 1965 in Bainbridge Island, Wash. It is played by two or four people on a badminton-sized court with a net height of 34 inches at the center, a perforated plastic ball (similar to a wiffle ball) and composite or wooden paddles about twice the size of ping-pong paddles. It is governed by the USA Pickleball Association, which was founded in 2005.

According to the 2022 Sports & Fitness Industry Association (SFIA) Single Sport Report on Pickleball, the sport grew to 4.8 million players in the U.S. in 2021. Between 2020 and 2021, numbers grew 14.8% following 21.3% growth the previous year and contributing to a 11.5% average annual growth rate over the past five years. The demographics for the sport have also evolved, expanding beyond the retiree/senior market with the average age now being 38 as well as a growing number of 20-somethings picking up the paddles to hit the court.

SFIA’s “East North Central” region – which includes Michigan, Wisconsin, Illinois, Indiana and Ohio – boasts over 800,000 total pickleball players and is the second largest region behind the South Atlantic (with over one million participants). SFIA is the premier trade association for top brands, manufacturers, retailers and marketers in the American sporting goods and fitness industry.

The Chesterfield-based Michigan Pickleball Association was founded in 2017 and today represents nearly 5,000 players, groups, pros, coaches and places to play. Currently, there are over 375 pickleball playing locations around the state (and growing).

To make a donation to Marshall’s Eaton Park project, visit marshallcf.org/give/donate-now or send a check to the Marshall Community Foundation at 614 Homer Road, Marshall, MI 49068. Donors should indicate that the donation is for Eaton Park Phase 1.