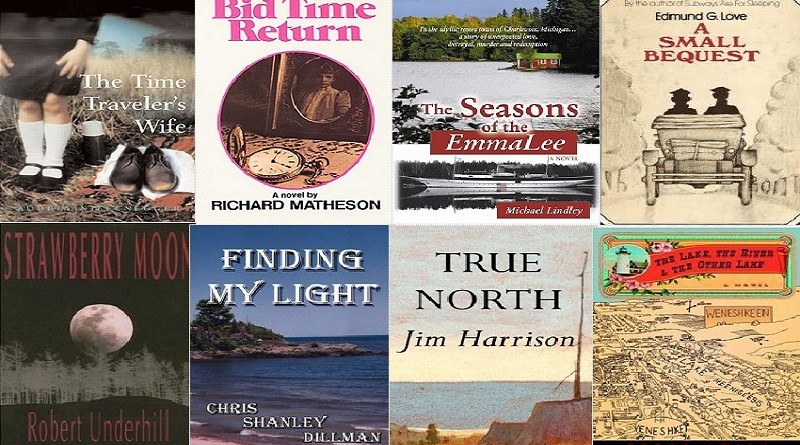 For as long as I can remember, reading has been one of my favorite activities – especially on rainy afternoons or while kicking back relaxing on a boat or at the beach. Over the years, I’ve found a fascination for novels with ties of Michigan – of course! As you plan your summer reading list, here are some to consider.

The Time Travelers Wife
The debut novel of author Audrey Niffenegger, published in 2003. This clever and inventive tale works on three levels: as an intriguing science fiction concept, a realistic character study and a touching love story. On the surface, Henry and Clare Detamble are a normal couple living in Chicago’s Lincoln Park neighborhood. Henry works at the Newberry Library and Clare creates abstract paper art. The cruel reality is, that Henry is a prisoner of time. It is a love story about a man with a genetic disorder that causes him to time travel unpredictably, and about his wife, an artist, who has to cope with his frequent absences and dangerous experiences. Various scenes in the story are set at Clare’s childhood home in South Haven (where the author is from).

Bid Time Return
This stunningly romantic novel of love and passion by Richard Matheson literally transcends time. The premise is captivating: What if you were a dying young man, visiting a turn-of-the-century resort hotel? And what if you fell in love with a painting of a beautiful stage actress – but she had lived and died a century before? But, what if your love was so strong that you could literally will yourself back in time to become part of her world? In the tradition of the classic romantic ghost story “Portrait of Jennie,” Matheson makes his two lovers totally believable, and so the undeniably fantastic premise soon becomes completely acceptable. In 1980, this story became one of the most famous movies to come out of Michigan – Somewhere in Time – filmed at historic Mackinac Island and its famed Grand Hotel.

Seasons of the EmmaLee
This love story by Michael Lindley is set in Charlevoix in the 1940s and present day, is an unexpected tale of love, betrayal, murder and redemption. This story takes you back to a small town in northern Michigan in the years before World War II, to share the life of Emily Compton, a young woman of privilege whose family lives in an exclusive summer resort enclave. Her father owns the magnificent cruising yacht, the EmmaLee. Jonathan McKendry, son of a local boatyard owner, finds himself tragically drawn into their world by his attraction to the ship and the Compton’s daughter. The story simultaneously tracks the meeting of two people decades later who are drawn together by the return of the EmmaLee to Charlevoix. Sally Thomason, a descendent of the family that first owned the ship, struggles with tragedy linked to her family’s history. She meets Alex Clark, the new owner of the EmmaLee, and as their relationship grows they search for common ground to help each other move beyond the past to build new lives. The sequel, On Past Horton Creek, makes a lovely companion.

A Small Bequest
Based on a true story from his own life, this the comic account by Edmund G. Love tells the story of two city boys and their summer expedition through Michigan’s Upper Peninsula in 1934. What begins as an innocent camping trip becomes a disaster of hilarious proportions for author Ed Love and his best friend, George French. Exploring Grandfather Perry’s legacy—two sections of land in the southwest quadrant of Luce County—the boys are beset by porcupines and poison ivy, blowouts and breakdowns and soon realize that the north woods scrub is no place for Eagle Scouts. Love is a keen observer of the American scene, and A Small Bequest is his witty reminder that all is not beautiful in the wilderness. Other novels drawn from Love’s life experiences include The Situation in Flushing and Hanging On: Or How to Get Through a Depression and Enjoy Life.

Strawberry Moon
The Chippewa call the first full moon of summer the Strawberry Moon. Under its light, danger casts a shadow over the scenic beauty of northern Michigan orchards. When Dr. Barbara Wilson fails to return home from an appointment, her disappearance is treated as a carjacking until her strangled and scalped body is discovered in the woods of this rural county. To make matters worse, Sheriff Hoss Davis is in the midst of a campaign for re-election, and the land-developer, who is bankrolling his challenger, recognizes in the doctor’s disappearance an opportunity to make Davis and his department look inept. The Sheriff’s desperate effort to find the missing doctor brings an encounter with a provocative member of the county’s Band of Ottawa and Chippewa. Davis deploys his small force but one of his women deputies acts on her own ideas about the direction the investigation should take …a heart stopping climax, and the result is a winner, especially for readers who like tales set in rural American or having Native American elements. Set in the “pinky” of Michigan’s mitten – the Leelanau Peninsula – this 2006 debut novel from Robert Underhill drew rave reviews.

Finding My Light
While the country struggles through the Civil War, sixteen-year-old Emma Truckey struggles through her own battles of self-doubt while living along the shores of Lake Superior in the Upper Peninsula of Michigan. When her father leaves to fight for the Union, Emma’s mother takes over his job as keeper of the Marquette Lighthouse and relies on Emma to assist with the keeper duties. In between her chores and the adventures with her friend, Bobby, Emma somehow finds herself mixed up in a wartime spy ring that will ultimately test her confidence and endanger her life. Based on a true story by Chris Shanley Dillman, a descendant of the Truckey family.

True North
An epic tale that pits a son against the legacy of his family’s desecration of the earth, and his own father’s more personal violations, this beautiful and moving novel by noted author Jim Harrison speaks to the territory in our hearts that calls us back to our roots. The scion of a family of wealthy timber barons, David Burkett has grown up with a father who is a malevolent force and a mother made vague and numb by alcohol and pills. He and his sister Cynthia, a firecracker who scandalizes the family at fourteen by taking up with the son of their Finnish-Native American gardener, are mostly left to make their own way. As David comes to adulthood-often guided and enlightened by the unforgettable, intractable, courageous women he loves-he realizes he must come to terms with his forefathers’ rapacious destruction of the woods of Michigan’s Upper Peninsula, as well as the working people who made their wealth possible. Jim Harrison has given us a family tragedy of betrayal, amends, and justice for the worst sins. True North is a bravura performance from one of our finest writers, accomplished with deep humanity, humor, and redemptive soul.

The Lake, The River and the Other Lake
The lives, loves, fates, and fortunes of the colorful inhabitants of Weneshkeen, a resort town on the shore of Lake Michigan, both townies and ritzy summer visitors, intertwine over the course of a single tumultuous summer in this novel by Steve Amick. The resort town of Weneshkeen, nestled along Michigan’s Gold Coast, has become a complex melting pot: townies and old timers mix with ritzy summer folk, migrant cherry pickers, wily river guides, and a few Ojibwe Indians. As the summer blooms, these lives mingle in surprising ways–a lifelong resident and Vietnam Vet pursues the take-no-guff deputy sheriff, while plotting revenge against the jet-skiers polluting his beloved lake; a summer kid from downstate stumbles into a romance with the sexiest rich girl in town; the town’s retired reverend discovers the Internet and a new friend in his computer tutor. A resonant social comedy with richly-drawn characters and quirky charm, The Lake, the River & the Other Lake welcomes you into a world that you may never want to leave.

For more on other Michigan authors, visit the Library of Michigan.