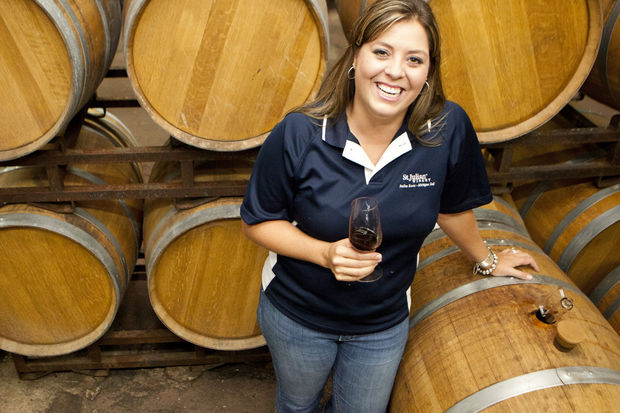 St. Julian Wine Company in Paw Paw has recently named Nancie Oxley as its Vice President. Recognized as Michigan’s first female winemaker, she joined St. Julian in 2002 as the Assistant Winemaker and moved up the ranks to Head Winemaker in 2010.

Nancie has been involved in the wine industry for the past 15 years and gained her knowledge primarily through hands-on experience in California and Michigan. She received Bachelor of Science in Food Manufacturing Operations and double minors in Agribusiness Management and Organizational Leadership & Supervision in 2002 and earned a Master of Science degree in Food and Agribusiness Management from Purdue University-Indiana University in West Lafayette, IN, in 2010, with the MBA portion of her degree completed at Indiana University’s Kelley School of Business. In 2013, Nancie was awarded the Outstanding Food Science Alumni Award from Purdue University.

“I am proud to work with the southwest Michigan grape growers to produce our award-winning wine portfolio for St. Julian,” Nancie says. “While our winery has been contributing to the craft beverage industry for nearly 100 years, there has been a growing interest by the state’s leaders in both the agricultural and tourism to work together to create an exciting Pure Michigan agri-tourism product. We’re honored to be a part of this exciting ‘local’ campaign as one of the long-standing heritage companies.”