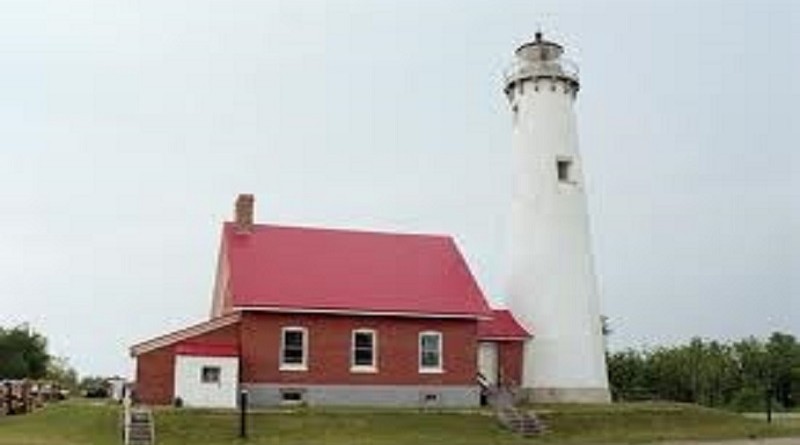 Did you know that Michigan has MORE lighthouses than any other state – at more than 115? Many of these beacons are registered as local, state and national historic sites; several operate active keeper programs; a few offer bed-and-breakfast accommodations; and many are rumored to be haunted! What is YOUR favorite Michigan lighthouse?

It’s no secret that I love the historic beacons the protect Michigan’s miles and miles of shoreline. While I have lived here my whole life – and spent occasional afternoons at Lake Michigan beaches – I never fully understood the importance of these majestic lighthouses.

When I started working at the West Michigan Tourist Association in 1997, my first project was researching the lights along the 1100-mile Lake Michigan Circle Tour* route for the official publication. I was instantly hooked. I was intrigued by the stories of the keepers (especially the women) and their families. I cataloged more than 100 lights – the dates of construction, tower height, whether tours are offered, a museum is on-site and if the site is believed to be haunted. 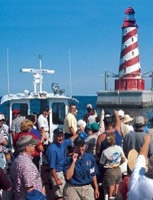 Michigan’s first lighthouse was built in the 1820s – Fort Gratiot, near Detroit. The newest light – Wawatam – was erected in 2006 at the end of the old railroad dock in St. Ignace. Many of the lights stand on remote islands, visible only from the water. Thankfully, Shepler’s Ferry Service offers boat tours through the Straits of Mackinac – where more than a dozen lights are waiting to be photographed. Countless tours and programs are also offered each year during the Great Lakes Lighthouse Festival in Alpena. This year’s event runs October 10-13.

The opportunity to spend the night in one of these historic homes can be found, here and there. Grand Traverse Lighthouse and Old Mission Point Light protect the tips of both the Leelanau and Old Mission Peninsulas, respectively. Keeper programs are offered at each. The Sable Point Lighthouse Keepers Association maintains and runs programs at Little Sable Point, Big Sable Point and Ludington North Pier Lights, along the Lake Michigan shoreline. 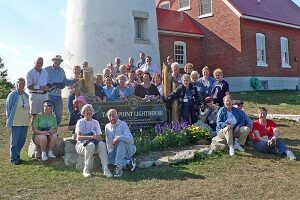 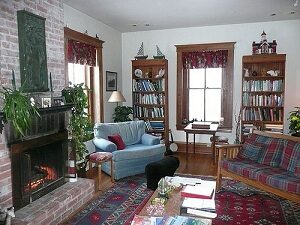 Big Bay Point, Jacobsville Lighthouse Inn and Sand Hills – all on Lake Superior – are privately owned and offer bed-and-breakfast stays. You can also stay at the remodeled crew’s quarters at Whitefish Point – at the Shipwreck Museum (where the Edmund Fitzgerald sank) or the Middle Island Keepers Lodge on Lake Huron – with a tour of the nearby Middle Island Lighthouse. The Coast Guard Station at Point Betsie, near Frankfort, offers two buildings, accommodating 18 total.

Over the years, I’ve written countless articles for a handful of magazines. “Magnificent Obsessions” featured modern day keepers at the Big Sable Point Lighthouse in Ludington, appearing in the 2006 issue of Michigan Travel Ideas. “Shedding Light on Michigan’s Haunted Beacons” ran in the Autumn 2010 edition of Michigan HOME & Lifestyle magazine, and shared some of the most noted ghost stories at area lights. 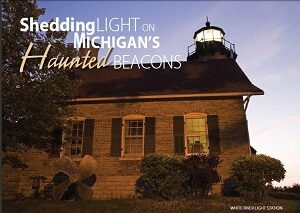 I’ve also presented dozens and dozens of programs at libraries, historical society, senior centers and more. Coming up this month, I’ll be presenting “Michigan’s Ghostly Beacons” at the library in Frankfort (Tuesday, August 20 – 7-7:45 pm) and “Ladies of the Lights” at the Norton Shores Library (Wednesday, August 21 – 6:30-8 pm). Both programs are free and open to the public. To keep track of upcoming programs (on lighthouses and various other topics), log onto PromoteMichigan.com and click on the “Speaker’s Bureau”. 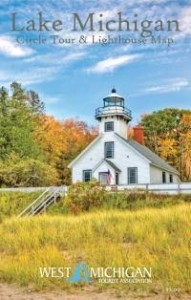 The Lake Michigan Circle Tour route is the culmination of innovation and hard work by visionary Jack Morgan of the Michigan Department of Transportation. Just 14 months after Morgan introduced his Circle Tour concept in 1987, agreement to designate and fund it was reached between the governors of Michigan, Wisconsin, Illinois and Indiana. In 1998, the route was mapped and signs were posted along all 1100 miles of Lake Michigan’s shoreline.

The West Michigan Tourist Association (WMTA) was there from the beginning. In 1988, it premiered the first and the only official Lake Michigan Circle Tour Guide. When the Chicago Tribune and Milwaukee Journal ran articles announcing publication of the colorful, 52-page Guide, no one on WMTA’s staff anticipated public reaction. On Monday following the story, 150 callers from the Chicago area alone requested the new publication. Two days later, an overburdened mail carrier unloaded 700 requests for the Guide from Illinois and Wisconsin. The next day, more than 1000 mail and phone requests poured in.

On its 10-year anniversary in 1998, the guide was rechristened the Lake Michigan Circle Tour & Lighthouse Guide. The locations of dozens of beacons were added to its Circle Tour map. The map index was expanded to include the year each light was constructed, whether it is active and whether it is accessible to the public. The publication identified 113 lighthouses and crib, tower and shoal lights around Lake Michigan. Its index also includes data on each light’s original Fresnel lens order, tower height and state/national historic recognitions.

In 2000, Straits area lights were incorporated into the lighthouse map. Although some are located in Lake Huron, they can be viewed via excursion boats and Shepler’s Mackinac Island Ferry out of Mackinaw City. Once nearly impossible for the earth bound traveler to see, these shoal and crib lights are now viewable from the water by anyone wishing to pay the fare.

WMTA created an online Lake Michigan Circle Tour & Lighthouse Guide in 2001. Far more comprehensive than the annual publications, each page on this section of the site includes lighthouse links, a glossary of terms and “Beacon Briefs” news stories. Each light has its own page complete with photographs, histories, driving directions and contact information. The online Guide has been one of the “Top 10” pages viewed on WMTA’s website since its inception.