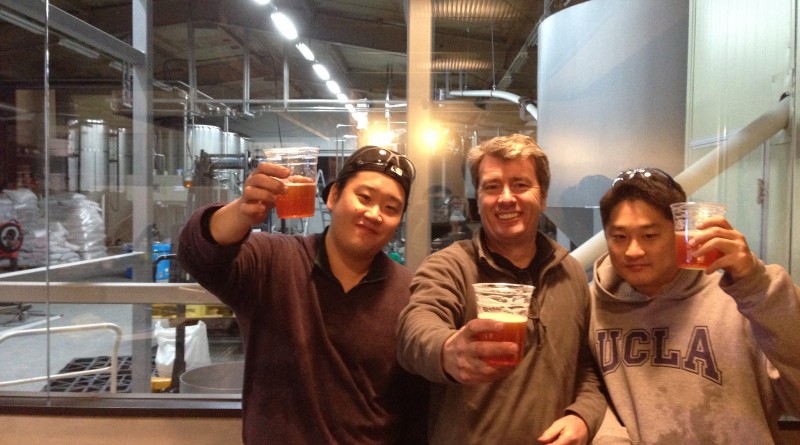 The makers of Jolly Pumpkin and North Peak Beer would like to announce their partnership with Seoul-based brewery, Playground. The craft beer industry in South Korea is just awakening and Playground Brewery is looking to bring variety and change to a country used to light lagers.

NUBC has been working with and training partners, Richard Kim and Soonbong Chun for over a year.  Training has taken place in the United States and in South Korea. Master Brewer and NUBC Partner, Mike Hall, is currently in Korea to assist with the final phase of the brewery install.

“We’ve installed a 37BBL system that will allow Playground to brew beers that are currently unavailable in Korea.  This is an exciting moment for us and for the burgeoning craft beer movement that is occurring in Korea.  Playground expects to have their systems in place and brew their inaugural batch this week.

Playground is focusing all of their talent and energy producing keg beer at this time, to provide the 10 million residents of Seoul locally made, hand craft beer at an affordable price. Continued growth is in the plans, but the primary focus is to brew the highest quality craft beer and be at the forefront of the artisan craft beer industry in Korea.  An on-site bistro will accompany the brewery and feature two amazing young chefs from Le Cordon Bleu.

Don’t Pause, Just Play. That’s the mantra Playground Brewery wants to convey, a fun side to overstressed Korean society. All partners are family men who cherish playground moments with their young children. “We remembered the best times we had with our children in photos at the playground,” says Richard Kim, Playground Brewery Founder and Partner.  Family values and time spent together on a playground helped derive the brewery’s name.

Playground Brewery is set to have a soft opening December 9th, with an official opening planned for December 19th. Beers scheduled for the opening are The Gentlemen, a Czech Pilsner; The Mistress, a Saison; and The Monk, a Korean IPA. “We are sure we will brew great beers that don’t exist in Korea’s market today. Our Partnership with NUBC enabled us to get here and we see them as more than just a partner,” Soonbong Chun, Playground Brewery Founder and Partner shared as the brewery opening draws near.