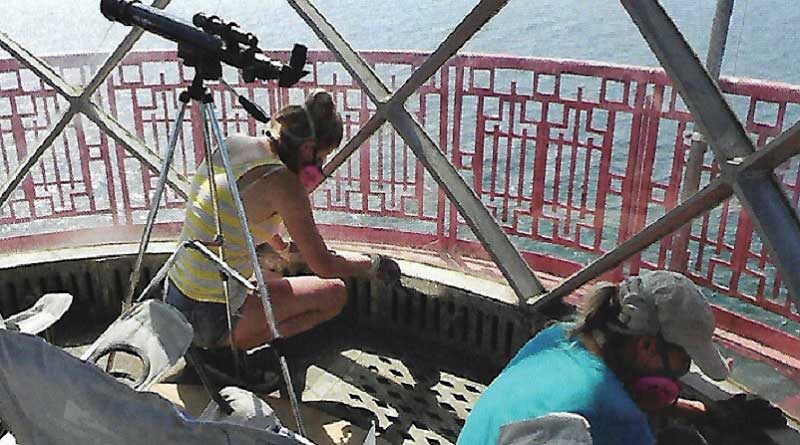 Volunteer opportunities (some include overnight stays) allow you to help preserve iconic sentinels on both sides of the Mackinac Bridge.

Twelve years before Michigan was admitted into the Union, its first lighthouse was constructed along the shores of Lake Huron at Fort Gratiot, north of Port Huron. Over the next century dozens of lights would pop up not only along the Great Lakes coastline, but offshore, on various inhabited and vacant islands and on naturally formed shoals or man-made cement cribs.

Over time, the wind, water and waves — and, in some cases, vandals — wreaked havoc on many of these beacons. In recent years, dedicated groups of historians and volunteers have taken charge of restoring the lights with vim and vigor, while also inviting an eager public to join in the process of preserving these iconic landmarks.

The Great Lakes Lighthouse Keepers Association (GLLKA) was the first organization to tackle the massive project in 1986, when it obtained a 30-year license for the abandoned St. Helena Island Light Station near St. Ignace and began the daunting task of bringing it back from the brink of collapse. Two years later, the lighthouse was placed on the National Register of Historic Places; today it welcomes hundreds of summer volunteers and visitors.

GLLKA then set its sights on the Cheboygan River Front Range Light, and began its refurbishment by upgrading the living quarters to safely house volunteers who host public tours, while simultaneously working on restoration and maintenance tasks.

Thanks to two grants from the Michigan Lighthouse Assistance Program (MLAP), GLLKA has evaluated and subsequently initiated the rebuilding and re-sheathing of the lantern box and gallery.
MLAP grants — funded by the Michigan State Historic Preservation Office (SHPO) and the Save Our Lights license plate program — were awarded this year to projects at Crisp Point Lighthouse, North Manitou Shoal Light, and Fort Gratiot Lighthouse in the collective amount of $126,667. Since 2000, SHPO has awarded nearly $2.7 million in matching fund grants to nonprofit lighthouse organizations statewide.

SHPO funds were instrumental in the work that’s been completed at the 83-foot-tall DeTour Reef Lighthouse, located near Drummond Island in northern Lake Huron. It was one of the last lights to be built in the Great Lakes, in 1931. Founded in 1998, the DeTour Reef Lighthouse Preservation Society has worked diligently to restore this remote Upper Peninsula light and create a unique historical maritime attraction.

“The success of our society is based on the dedicated efforts of our volunteers, donors, members, and the loyal support of grant agencies for the 14 restoration and educational grants received from 1999 to 2013, for a total value of $1.2 million,” says Jeri Baron Feltner, founding director emerita of the society and the 2016 recipient of the Beacon Award presented by the Michigan Lighthouse Alliance.

“Since the first public visitor’s program in 2005, hundreds of lighthouse enthusiasts have enjoyed touring the restored lighthouse and participating in the overnight keeper programs,” she says.
Built in 1910, the White Shoal Light in Lake Michigan, about 20 miles west of the Mackinac Bridge, is one of the state’s most recognizable lights, and features red-and-white candy cane (or legendary barber pole-style) striping.

For the past five years, the White Shoal Light Historic Preservation Society has been actively restoring this towering structure, with the hope of opening it up for both day tours and overnight stays. When complete, the 121-foot-tall lighthouse will accommodate up to 12 guests in six private rooms, plus a staff of three. For now, however, the only way to spend the night in this towering light is to volunteer to work on restoring her.

The latest offshore light to join the restoration ranks is Spectacle Reef Light, located about 18 miles east of Cheboygan in Lake Huron, which marks one of the most treacherous stretches of the Straits of Mackinac. The Spectacle Reef Preservation Society — a 501(c)(3) educational organization — was recently formed to preserve this 1874 light.

Marty Rosalik, an automotive engineer from metro Detroit, serves as technical director for the project. He spent the previous three years helping refurbish White Shoal. He’s now working with a handful of other co-founders, including Tom McBride. McBride and his wife, Jackie, own and operate The Shoal Shoppe, an online store that generates restoration funds for Spectacle Reef and nearby Waugoshance Lighthouse.

Another co-founder of the group is Patrick McKinstry, who has more than 20 years of lighthouse restoration experience, including directing operations at Saginaw River Rear Range Light in Bay City, which is owned by the Dow Chemical Co.

“We’ve been gaining interested organization members and volunteers, but we need to support people’s needs out there first,” Rosalik says. “Electricity and hot water are ideas in the works. We have plans that involve solar, wind, and diesel for power. We’ll eventually offer longer stays, with a resident keeper program, and hope to provide public tours that will focus on the history of the light and educating visitors about why lights like this were deemed necessary, given the huge task to build them.”

Reprinted from the Summer 2021 issue of Michigan BLUE magazine.