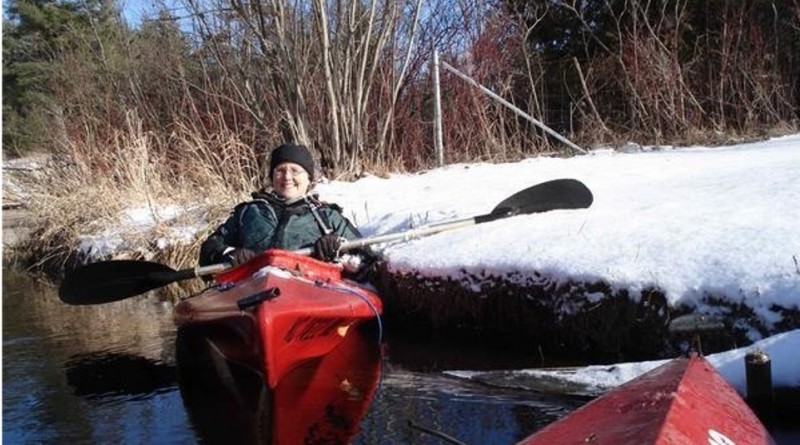 My New Year’s Resolution for 2007 is the same as it was for 2006 and 2005 — it’s worked for me in the past, so I’ve decided to stick with it. That resolution is to try something new every month. Whether that’s a new food, a new activity, a new destination, etc.

In the past 2 years, I’ve broadened my horizons greatly and have learned that I like coffee, martinis and cigars. I’ve tried snowshoeing, downhill skiing, cross country skiing, canoeing and kayaking (the latest adventure…more about that in a second). I’ve been to Jordan (the country), Denver, Milwaukee, South Manitou Island and Washington DC. I got a tattoo and traveled via Amtrak. Along the way, I’ve met some great people — including myself (or at least new parts of myself!).

Now…on to the story about the winter kayaking. Back in December, I was invited by a friend in Northern Michigan to try this adventure. “Sure,” I said. So, on January 10, we put our kayaks in on the Platte River for a 2-hour trip down to Honor. It was beautiful (chilly, with occasional sunshine). We saw wild turkeys, deer, ducks and birds. We saw amazing ice formations on the branches that hung in the water. I worked my way through shallow areas, learned to maneuver around obstacles and was having a great time.

About 3/4 of the way through the trip, things changed. My kayak veered toward a downed tree, came up parallel to it and within about 10 seconds, the kayak was tipping and I was falling out in to the frigid waters of the Platte River. I did get out before the kayak went under the tree, popping out on the other side. Of course, it was one of the deepest areas of the river — up to my chest. I was able to move around the tree, grab my paddle and kayak and haul all three of us up on shore while I waited for my patient guide to help out.

The last 30 minutes of the trip were quite interesting…and cold (at least for my feet!). Once we pulled out in Honor, I stripped down off most of my clothes and we drove over to Family Dollar to buy new, dry clothes. What an adventure. Had my clothes been dry…I would have done it again the next day!

Now…my only question is…what adventure does February hold? And March, April, May, June……if you have any ideas, I welcome them!