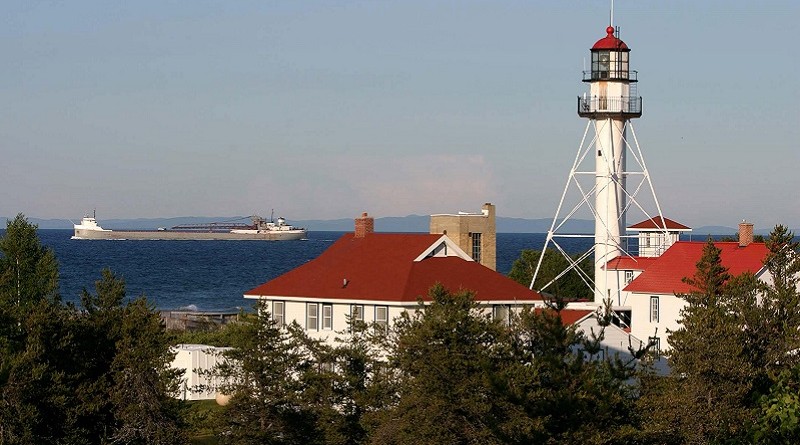 The Great Lakes Shipwreck Historical Society was founded in 1978 by a group of divers, teachers and educators to commence exploration of historic shipwrecks in eastern Lake Superior, near Whitefish Point in Michigan’s scenic Upper Peninsula.

The Shipwreck Society is a diverse organization that regularly publishes a newsletter, video/DVDs, booklets, and commissioned works of maritime art. Using its 47-foot Research Vessel David Boyd, the Society actively searches and documents historic shipwrecks each year during the diving season. The Society engages a team of highly experienced volunteer technical divers.

The Shipwreck Museum is open to the public seasonally from May 1 to October 31. In 2012, museum visitation was nearly 63,000 people.

For a totally unique experience, consider an overnight stay in the restored 1923 Coast Guard Lifeboat Station Crew Quarters. With five themed guest rooms, you can take a step back in time and imagine the life along the shores of Lake Superior. As a guest, you also receive admission to the museum and light station, a discount in the museum store and a one year membership to the Great Lakes Historical Society, as well as continental breakfast in the morning. Stays are offered April through November (although in April and November, the museum itself isn’t open).

The Society is regarded as a leader in the field of underwater exploration and shipwreck documentation on the Upper Great Lakes. The most noted shipwreck in the Great Lakes history took place 17 miles northwest of Whitefish Point, 40 years ago this month. 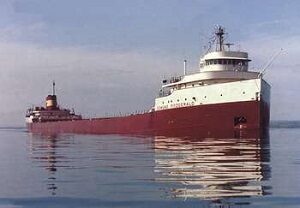 The S.S. Edmund Fitzgerald was conceived as a business enterprise of the Northwestern Mutual Life Insurance Company of Milwaukee, Wisconsin—who contracted with Great Lakes Engineering Works of Ecorse, Michigan to construct a “maximum sized” Great Lakes bulk carrier. Her keel was laid on August 7, 1957 as Hull No. 301, according to The Society’s website.

Named after the President and Chairman of the Board of Northwestern Mutual, Fitzgerald was launched June 8, 1958 at River Rouge, Michigan. Northwestern Mutual placed her under permanent charter to the Columbia Transportation Division of Oglebay Norton Company, Cleveland, Ohio. At 729 feet and 13,632 gross tons she was the largest ship on the Great Lakes, for 13 years, until 1971.

On November 10, 1975, the gales of November kicked up in a furious way taking with it the mighty Edmund Fitzgerald and its entire crew of 29. The legend of the Edmund Fitzgerald remains the most mysterious and controversial of all shipwreck tales heard around the Great Lakes. Her story is surpassed in books, film and media only by that of the Titanic. 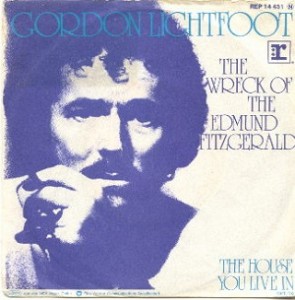 Over the years, three underwater expeditions to the wreck site have been conducted by The Society—in 1989, 1994 and 1995. During that last excursion, at the request of family members of her crew, Fitzgerald’s 200-pound bronze bell was recovered (on July 4). This expedition was conducted jointly with the National Geographic Society, Canadian Navy, Sony Corporation and Sault Ste. Marie Tribe of Chippewa Indians. The bell is now on display in the Great Lakes Shipwreck Museum as a memorial to her lost crew. 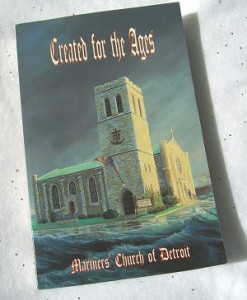 Canadian folksinger Gordon Lightfoot inspired popular interest in this vessel with his 1976 ballad, “The Wreck of the Edmund Fitzgerald.” In this song, he sings “In a rustic old hall in Detroit they prayed, In the Maritime Sailors’ Cathedral. The church bell chimed till it rang twenty-nine times, For each man on the Edmund Fitzgerald.” This church was founded by a woman, Julia Anderson, whose will established it in 1842. Her wishes were to have this stone church built in downtown Detroit, which is now on the National Register of Historic Places. 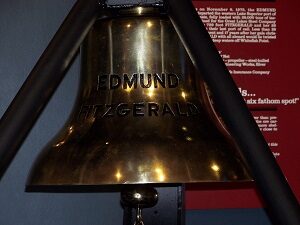 Each year, The Society hosts a memorial service on November 10 to honor those who lost their lives on the Edmund Fitzgerald four decades ago.