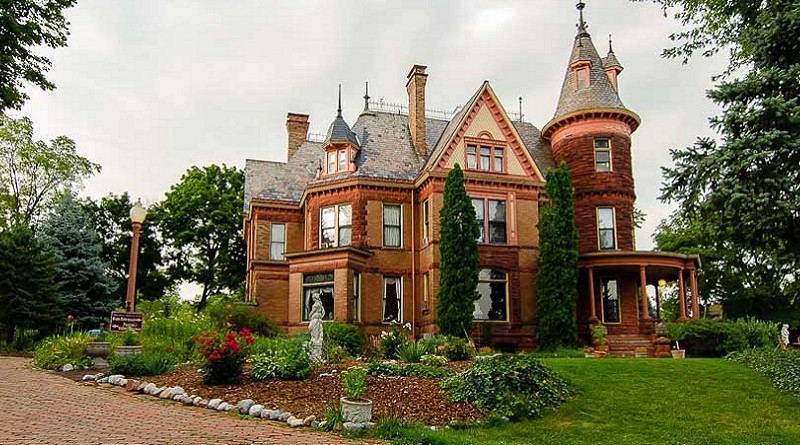 When it came time to celebrate my dad’s birthday on October 9, only one place was on my radar. I began plotting the secret gathering before Labor Day and there were times I was so excited I almost blurted it out to him or shared something publicly on my Facebook.

My dad is a long-time lover of history and a dedicated genealogist. The summer between my fourth and fifth grade years, our summer vacation trip was spent traveling in our boat-of-a-Buick through Pennsylvania and New York, visiting libraries, town halls and cemeteries in search of tidbits tied to our family tree. At the time, I loathed the experience, but now…35 years later, it is one of my favorite childhood memories. 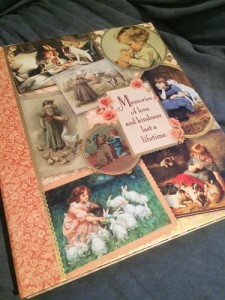 In 1998 or 1999, my brother and I received a great Christmas gift from our dad: detailed albums full of photos, histories, maps, scans of our family tartan and other pieces tied to our family history…both on his side of the family and my mom’s. It is still one of my most treasured possessions.

When I launched Promote Michigan in 2004 my “Speaker’s Bureau” provided the ideal opportunity for me in presenting programs at libraries, senior centers and museums around the state. My dad’s passion for history had finally caught up with me (that, and a genetic propensity for public speaking).

With my growing interest in culinary and agriculture, it made sense that “Made in the Mitten: Savoring Michigan’s Rich Foodie & Agricultural Heritage” be among my offerings. Ironically, the night before this birthday dinner, I gave this exact program at the Otsego History Museum. Several members of my family attended, including my dad—who hadn’t seen me speak publicly since the late 1980s. 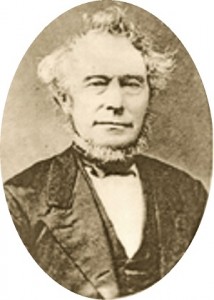 Years ago, as I began researching the economic impact and history of a variety of crops like asparagus, carrots, peaches and the like, my dad shared with me the story of George Taylor—a Scotsman who settled in Portage (south of Kalamazoo), who was the first person to grow commercial celery in America. An historical marker celebrating this contribution stands in that community today. Recognized as “Celery City,” it is also home to Celery Flats Interpretive & Historic Area.

Taylor was also responsible for introducing chefs at the Burdick Hotel—now the Radisson Plaza Hotel in downtown Kalamazoo—to this rare vegetable. It is said they considered it a curious crop, but soon it found its way into recipes in the fine dining establishment at the turn of the century. 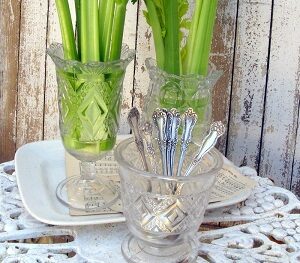 If you were not aware, in the mid-to-late 1800s, celery was considered a delicacy—much like caviar or escargot. Only the well-to-do served it in their homes, displayed in elegant dishes filled with ice water to keep the stalks tall and crunchy.

Soon the rich soils of the Kalamazoo area were cultivated with celery seeds and the industry was born (and now flourishes in the Zeeland area, in neighboring Ottawa County). 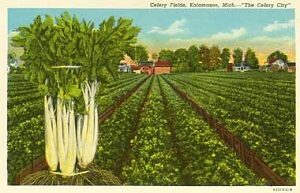 Taylor and his family settled throughout the Kalamazoo area. His niece, Mary Taylor, inherited an undeveloped plot of land just west of downtown—high on a bluff adjacent to the campus of Kalamazoo College. It is there that she and her husband, Frank Henderson, set down roots.

Henderson was one of early Kalamazoo’s most successful businessmen—the owner and president of the Henderson-Ames Company, which made uniform regalia for secret societies, fraternal organizations and the military.

A man of grand ideas, Henderson dreamt of building an expansive suburb on this land and in 1888, he enlisted the help of surveyors, engineers and landscape architects to plot the land and create Kalamazoo’s first “natural site plan” development. The first building to be erected was to be a 25-room, Queen Anne-style house designed by C.A. Combert of Milwaukee, Wisconsin, where Frank and Mary would reside.

The $72,000 building costs included seven baths (one with a 13-head shower), an elevator and a third-floor ballroom. The castle’s exterior was constructed of Lake Superior sandstone and brick. The interior wood included mahogany, bird’s eye maple, quartered oak, birch and American sycamore. The home—Henderson Castle—exemplified the most expensive tastes of the time.

The Henderson’s had a grand housewarming party in 1895 at the completion of the castle’s construction. One could only imagine who graced the halls and shared in the hospitality of the day. Yet, Frank’s years in the grand home were short-lived, as he passed away in 1899. Mary died in 1907, and both she and Frank are buried across the street from their beloved castle, in Mountain Home Cemetery.

Over the years, nine parties have owned Kalamazoo’s famous castle on the hill. In 1957, the house was purchased as the future site for the Kalamazoo Art Center. However, when the Institute of Arts remained in downtown Kalamazoo, the castle became the property of the renowned liberal arts school at Kalamazoo College (which lies adjacent to the castle’s grounds).

Henderson Castle—which now operates as a bed-and-breakfast and French-inspired restaurant—has been featured in three movies (all of which were horror films) and has also been featured on the Discovery Channel and House Hunters. It’s the topic of many newspaper and magazine articles as well.

Now, back to MY family and the reason for this local history lesson…

George Taylor was one of four brothers (the others included Andrew and James, who also lived in the Kalamazoo area). Mary Taylor Henderson was the daughter of James Taylor, George’s brother. The fourth brother Alexander, remained in Scotland. He was my great-great-great-great grandfather on my dad’s mother’s side of the family. 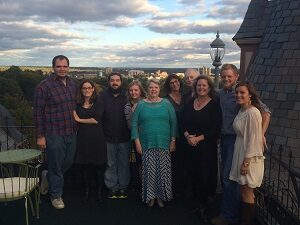 So, when it came time to choose the setting for my dad’s surprise birthday celebration, it only made sense to secure the private dining room at Henderson Castle for a gourmet, 7-course dinner (for 10). It was his first visit to the castle. In fact, it was the first visit for everyone in the family (other than myself…I had toured it some 15 years prior).

Our evening started with a tour, led by a charming young man named Drakkar Hill. The Western Michigan University student (go Broncos) had only been “on the job” three months, but his knowledge end passion for the castle’s history was impressive. He also had a great personality, and was engaging with the family. He shared his stories, indulged us with our questions and photos, and was genuinely excited to hear of our “family ties” to the building and its original residents.

When our three generations finally settled in for our dinner, everyone was full of family pride…especially my dad.

Just before the first course was served, the current owner—Chef Francois Moyet—stopped by to say hello and happy birthday. He shared a bit more of the castle’s history and his plans to secure it as an historic site for future generations (which made us all happy). My dad shared our connection to Mary Taylor Henderson.

Soon, our server, Andrew, was plating our first course: a colorful and flavorful bruschetta crustini with a delicious homemade balsamic drizzled on the plate (officially, called “amuse bouche”). Next, it was a fresh garden salad, followed by a warming bowl of the soup de jour: creamy potato. 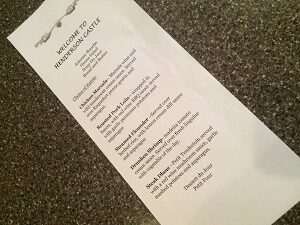 Entrees included Steak Diane, Chicken Marsala, Drunken Shrimp, Steamed Flounder and Roasted Pork Loin (wrapped in bacon), each with warm rolls and butter. Between the 10 of us, we had at least one of each dish and sample bites on forks were passed among the group upon request.

Dessert was a light and airy tiramisu, followed by a post-dessert tart with a bit of cream cheese and chunks of melon and grape slices. Two bottles of Henderson Castle wines, made locally, were paired with our meal—the unwooded Chardonnay and the ruby-red Meritage.

Those who know me, know my love of good food and company as I travel around Michigan (and, sometimes, beyond). But nothing compares to sitting around the table with your parents, adult children and siblings to celebrate a loved one’s birthday. And, there’s nothing better than when you—as daddy’s girl, even at age 46—make daddy smile!