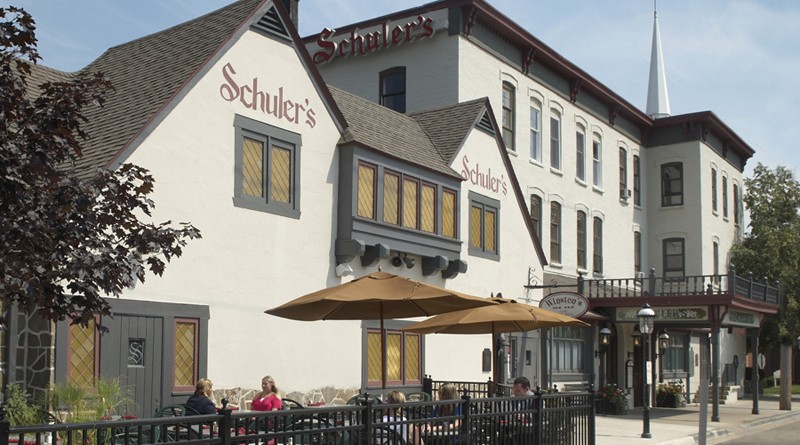 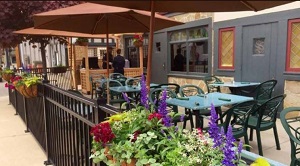 It is outdoor dining season and you’re invited to gather with family and friends on the patio outside Winston’s Pub at Schuler’s Restaurant in historic Marshall.

“Last year our grill night was a hit and this year we decided to amp it up a bit,” says third-generation owner Hans Schuler. “Not only did we make improvements in the patio itself, but we’ve increased the grilling option from one to two nights to accommodate the requests from our guests.”
The 700-square-foot patio features a generous outdoor grilling space, along with 34 seats for guests stretching out along Eagle Street. Guests can order from the regular pub menu, seven days a week, with weekly grill specials from David Frame on Wednesday and Thursday nights. The patio will be open, weather permitting, through the early fall season.

One of the treasured elements of the historic Schuler’s Restaurant & Pub are the murals which line the walls and the eloquent sayings etched into the beams of the main dining room, both the result of second-generation owner Win Schuler’s insatiable interest in history. 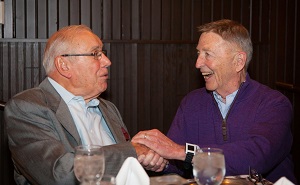 Last month, a new quote from long-time patron George Petredean, age 97, was added to this collection: “The greatest joy in life is giving.” Those who know him say that George not only expresses this saying verbally, but also in the way he lives his life on a daily basis.

Considered a philanthropist by friends, family and the community, George is a big supporter of his Homer community, giving generously to their library and the Homer Area Community Foundation. He is also a supporter of his college alma mater, Eastern Michigan University.

“I can’t help but feel grateful for all the gifts I’ve received in my life, and it’s so important to me to give back,” George says. “It is always better to give, than receive, with the joy in your heart.”

When he was a teenager, George and his family immigrated to the Detroit area from Romania. Throughout his life, the U.S. has truly been a land of opportunity for him in raising his own family and operating a successful business in the Calhoun Foundry.

“I’ve always felt grateful to be a part of this great country and the education received coming here,” he says.

George has been a loyal customer of Schuler’s, often entertaining customers prior to retiring. He was a true friend of Win Schuler, son of restaurant founder Albert Schuler.

“No matter who it was, Win would remember your name,” George recounts. “He was such a great guy and I’m thankful to have known him.”

Not only is George considered a good Schuler friend, but his children and their children have become familiar faces of the restaurant and pub as well.

“George Petredean, the ‘chairman’ I called him, was a close friend of my father’s,” says Hans Schuler. “We are honored to celebrate him next to my father on the beams of our Centennial Room. The chairman was a great mentor to many individuals and businesses in the Calhoun community. His generosity and leadership has set a great example to many.”

For over 100 years, Schuler’s Restaurant & Pub has kept it in the family – and beaten the odds. How rare is this achievement? According to Family Business Review more than 30 percent of all family-owned businesses survive into the second generation. Twelve percent will still be viable into the third generation, with three percent of all family businesses operating at the fourth-generation level and beyond. Schuler’s, a four-generation, family-owned restaurant in Marshall, Michigan is an institution.

Schuler’s attributes its longevity to the foresight of our founder and the succeeding family members who have used their entrepreneurial skills to build a 100-year tradition of hospitality and fine dining.

This historical buffet provides a peek at the character of the people and the events that have brought the restaurant to this noteworthy time. 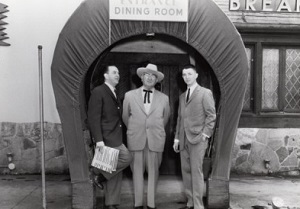 The restaurant’s founder, Albert Schuler, was a native of Rome, New York. The adopted son of a traveling butcher, Albert migrated to Marshall in the early 1900s. The owner of a local lunch counter and cigar shop befriended him, and after learning the trade Albert opened a similar business on Main Street in 1909.

In 1920, he purchased a hotel with a small dining room on Main Street, and named it The Albert. It was during this period that Albert became deputy sheriff. It wasn’t unusual for Albert to be summoned at the restaurant to attend to matters of the law. He would take off his apron and was out the door. Minutes or hours later, his apron was back on and it was business as usual.

In 1924, he was ready to expand his business. He sold the hotel on Main Street and purchased the Royal Hotel and Restaurant in Marshall, and changed the name to Schuler’s. He built a seven-lane bowling alley and soon the combination hotel/restaurant/bowling business became a popular gathering spot for locals and visitors.

Win Schuler, Albert’s son, joined the family business in 1934. In 1936, Win, a former high school history teacher and coach, became full owner of the restaurant while his father continued to run the hotel and serve as sheriff of Calhoun County. 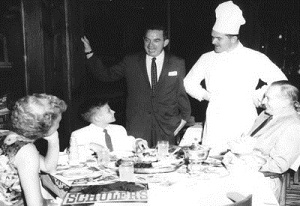 Win is credited with expanding the family business into a highly successful string of restaurants across Michigan. His magnetic personality and salesmanship were his trademarks. He believed that personal service set his business apart.

Win’s personal service included remembering every customer’s name. He worked hard at this art and is legendary in his ability to remember names. After an introduction, he worked names into any subsequent conversation three times. He even wrote the names down and before he went to sleep at night he would go over the new names of the day.

The murals on the walls throughout Schuler’s and the sayings etched into the beams in the main dining room are the result of Win’s insatiable interest in history. Both have become part of the charm that continues to draw customers from hundreds of miles around to dine here. 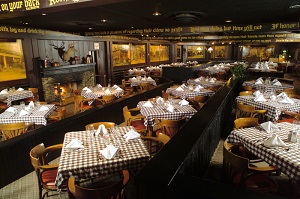 In addition to acquiring other restaurants, in the late 1930s Win and his brother, Albert, bought a golf course in Marshall. They named it Alwyn Downs. Back then, they charged 50 cents to play a round of golf. They eventually sold the course, but it’s still in business today.

During World War II, injured military men and women who were sent to Percy Jones Hospital in Battle Creek heard about Schuler’s. It became standard practice for the patients to come to the restaurant at some point during their recovery. Some of the more famous patients included Gene Autry and Bob Dole. 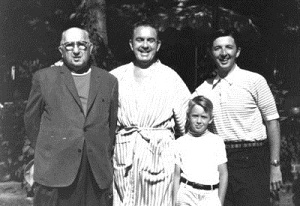 Big Ten coaches and teams have been attracted to Schuler’s too. For decades, during the fall football season, Marshall has been referred to as the “Crossroads of the Big Ten.” Duffy Daughtery, Biggie Munn, Bump and Pete Elliott, Ara Parshegian, Bo Schembechler, Don Carhau, George Perles and Mark Dantonio are just a few of the Big Ten coaches who have frequented the restaurant.

In 1959, Win’s son, Hans Schuler became the third generation to join the family business. He grew up in the business and always knew this is what he wanted to do. Under his guidance at one time the family of restaurants grew to nine. And in the Marshall restaurant he’s responsible for major expansions and ongoing renovations. Like his father, Hans enjoys greeting his customers. He also has an unusual ability to develop the people working on his team.

Very few families in the nation have been in the restaurant business as long as the Schuler family, marking 100 years in 2009. In a challenging economy and changing marketplace, the iconic restaurant continues to thrive while evolving with the times. Great food and hospitality are critical.

“We are always looking for something fresh, taking the best of the past and blending it with contemporary trends and tastes,” says Hans Schuler. “Schuler’s remains dedicated to reinvesting in the business and supporting the community in which we operate.” 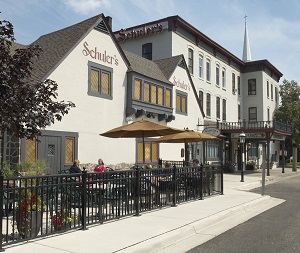 In 2012 a lifetime of leadership and exceptional performance by Hans Schuler was recognized as he received the inaugural “National Restaurateur of the Year” award from Independent Restaurateur. “This award represents the highest level of excellence in all aspects of the business and recognizes an exemplary commitment to owning and operating a successful independent restaurant,” says Jim Young, publisher of Independent Restaurateur magazine.