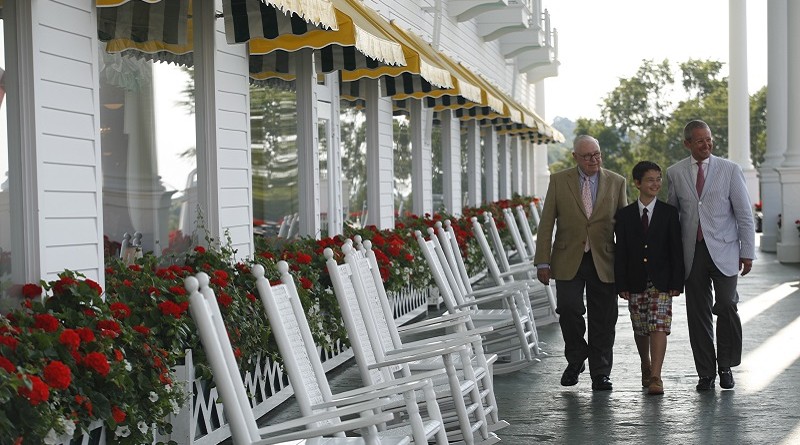 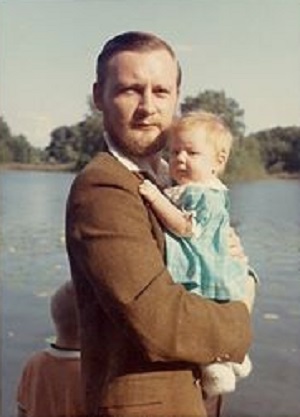 I was just three years old when Father’s Day became an official holiday in 1972 (58 years after President Woodrow Wilson made Mother’s Day official). It was about that time that I remember taking my first family trip (to Northern Michigan…Leelanau State Park and Clinch Park Zoo).

Years later, fueled by my dad’s love of history and a growing interest in genealogy, our family of four traveled through Pennsylvania and New York searching for information on our ancestors. The summer between high school and college, my dad and I took a leisurely trip to the Straits of Mackinac, Sault Ste. Marie and down along the coast through Petoskey, Traverse City and Benzie County before returning back in our hometown of Plainwell. 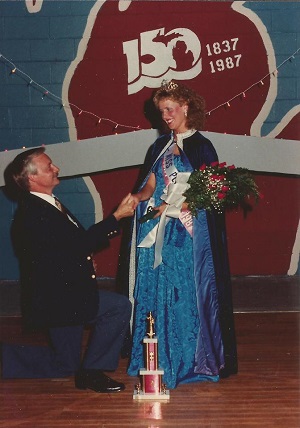 A love of travel and history weren’t the only things I inherited from my dad. I also followed in his professional footsteps as a broadcaster, communicator and storyteller. When you grow up inspired by someone who has the opportunity to make a living doing what they love, you pay attention. His continued passion for his career is something I understand clearer than anything else in life.

Yet, family businesses aren’t what they used to be. According to the Family Business Review, while 30 percent survive into the second generation, only 12 percent are viable into the third generation. A mere three percent operate at the fourth-generational level (or beyond).

In Pure Michigan, we have many distinctive family-run companies which not only maintain their roots as historic businesses, but they are paying attention to current trends and looking to the future to thrive for new generations.

Grand Hotel, Mackinac Island—First opened in 1887, this National Historic Landmark has been operated by the current family for 83 years. In the midst of the Great Depression in 1933, W. Stewart Woodfill (who was hired as a desk clerk in 1919) was the sole bidder to take the hotel out of receivership and preserve its place in history.

His nephew, R. D. (Dan) Musser Jr., began working at the hotel as a college student in 1951. So as to not show favoritism, the young man was required to work twice as many hours as other employees for the first two weeks of each rotation in a new department. It was a worth ethic that lead to his future success and in 1960 he was named president of the hotel. In 1979, Dan and his wife, Amelia, purchased the seasonal property on America’s most noted island and began the task of redesigning both the interior and exterior spaces, with the help of architect Richard Boss and decorator Carleton Varney. 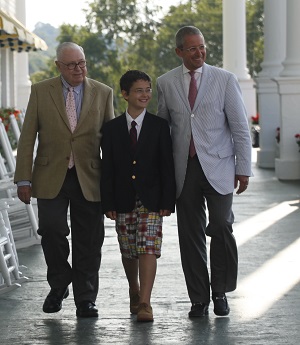 Dan Musser III grew up in the family business. After graduating from Albion College in 1986, he made the fast track up through every department to gain a thorough understanding of all aspects of running the multi-faceted property. He served as kitchen assistant, bellman, bartender, bar manager, front desk clerk and manager, reservations manager and vice president, before being named President in 1989.

Schuler’s Restaurant, Marshall—In 1909, a young orphaned boy by the name of Albert Schuler (a name he acquired from a traveling butcher who took him in after his mother died and his father abandoned him) became an entrepreneur, building the foundation for what has become one of Michigan’s most noted restaurants in historic downtown Marshall.

Bert’s first business was a cigar shop, but he soon added billiard tables, a bakery and a lunch counter. In 1917, he purchased a café and his career in the culinary industry began. The specialty of Albert’s 30-seat eatery was a 25-cent blue-plate dinner. By 1920, Albert and his wife, Emily, purchased a hotel with a small dining room. A few years later, they purchased a larger property in town, renaming it Schuler’s. 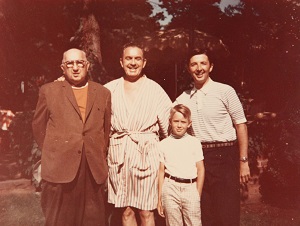 Second-generation Winston “Win” Schuler grew up in the family business and was quick to learn the daily operations of this thriving hospitality industry. He managed Schuler’s with his brother, Albert Jr., and the company quickly became a nationally-known institution. At one point, nine Schuler’s restaurants operated around the state (with one in Indiana).

“While it was expected that I would follow in the footsteps of my father and grandfather, it was a path I was actually eager to take,” says third-generation owner Hans Schuler. He officially joined the business in 1959 and in 1970 became President of the company, purchasing it from his father upon his retirement in the 1980s. Within the first decade, Schuler’s was named a Michigan Historic Landmark Site (1977) and in 1999 was recognized as a Michigan Centennial Business.

Larry Schuler is the fourth-generation to work in the family business and serve as a leader in the state’s hospitality industry. After graduating college and working out of state, he returned to Michigan in 1986 to serve as Vice President and General Manager of the Marshall property. He is currently the president of Schu’s Hospitality and is a consultant for The Henry Ford Museum & Institutions in Dearborn. 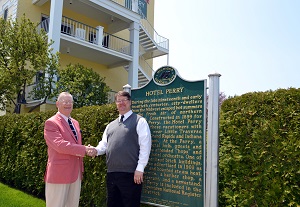 Stafford’s Hospitality, Petoskey Area—It could be said that Stafford Smith was born to be a hotelier in the Petoskey area. Although his family was from the downstate town of Albion, they were vacationing in Petoskey when he made his appearance into the world. Today, his name is synonymous with hospitality in this lakeshore region.

He was just 22 years old in April, 1961 when he purchased the Bay View Inn. Originally built in 1886, this charming vintage inn is Stafford’s flagship property nestled along the shores of Little Traverse Bay. The newly renovated Pier Restaurant in downtown Harbor Springs became the next acquisition (1970) – and is also home to The Pointer boat, followed by the Earl Young-built Weathervane Restaurant in Charlevoix (1986), the Perry Hotel (1989), the Gallery (2007), the Crooked River Lodge in Alanson (2011) and the Draw Bridge Bistro in downtown Charlevoix (2014). 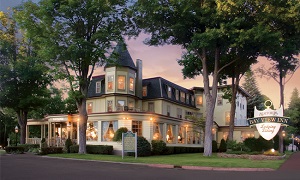 Stafford’s contributions to the state’s tourism industry are well noted. He is past president of the Petoskey Chamber of Commerce, past chairman of the West Michigan Tourist Association and in 1995 received Hotelier of the Year from the Michigan Lodging & Tourism Association. He was the Founding President of the Independent Innkeepers Association (which is now Select Registry) and was the first recipient of its “Stafford Smith Award” for outstanding contributions to the association and hospitality association.

Stafford R. “Reg” Smith is the eldest child of Stafford Smith, and his wife of 55-years, Janice. He grew up in the business, having worked in nearly every capacity at the Inn. During the 1990s, Reg and his wife, Lori, together served as innkeepers at the Bay View Inn. Today, Reg is the Vice President of Hotels for Stafford’s Hospitality’s seven regional properties.

“Our family business has always been about service,” Reg says. “My dad lead by example in his approach to serving our guests, our community and developing a company that people would be proud to join as a team member. This is what I experienced growing up ‘in the business.’ There is a well-known quote from E.M. Statler on the corner of Statler Hall at Cornell University which to me has summed up our family’s commitment to hospitality: ‘Life is Service – The one who progresses is the one who gives his fellow man a little more – a little better service.’”

Zehnder’s, Frankenmuth—The first restaurant meals served in Frankenmuth were at the Exchange Hotel in 1856, just 11 years after the town’s founding. In 1928, William and Emilie Zehnder sold their 80-acre farm and borrowed the balance of the funds necessary for the $8,000 down payment to purchase the hotel. They took inspiration from Mount Vernon—the home of George Washington—in remodeling the business and opened on Mother’s Day, 1929. That first day, they served 312 guests for just one dollar each.

The 1950s were a pivotal decade for Frankenmuth and the Zehnder family. The Zehnder family purchased the competition, the Fischer’s Hotel (where the community’s family-style chicken dinner originated), in 1950 and named Tiny Zehnder manager. Within a few years, Tiny suggested to the family that they remodel the building, adding character through Bavarian architecture. The entire family agreed and by 1959 the newly named Bavarian Inn opened with a grand celebration—the foundation to Frankenmuth’s Bavarian Festival, which is still celebrated to this day.

Despite financial setbacks, the Zehnder family continued to invest in its businesses and community, helping to create an unquestionable pride in its German heritage. The successful transformation of Fischer’s Hotel to the Bavarian Inn helped to encourage other Frankenmuth property owners to develop what is now “Michigan’s Little Bavaria.”

The third generation of the Zehnder family are still currently involved in the day-to-day operations of their expanded community-wide brand. The Bavarian Inn branch of the family oversees the Bavarian Inn Restaurant, the Bavarian Inn Lodge and the River Place Shops. All under the guidance of their 95-year-old matriarch, Dorothy Zehnder. The Zehnder’s of Frankenmuth branch operates their flagship restaurant Zehnder’s, the championship golf facility The Fortress, Zehnder’s Splash Village and their retail facility Zehnder’s Marketplace.

As America’s largest family restaurant, Zehnder’s annually welcomes nearly one million guests (more than 30,000,000 during its more than 150-year history) serves more than 900,000 pounds of chicken as part of their ever famous all-you-can-eat-family style chicken dinners.

Michigan is home to many other generational family businesses, what are your favorites?

An abridged version of this article was posted on June 17 on the Pure Michigan Blog.