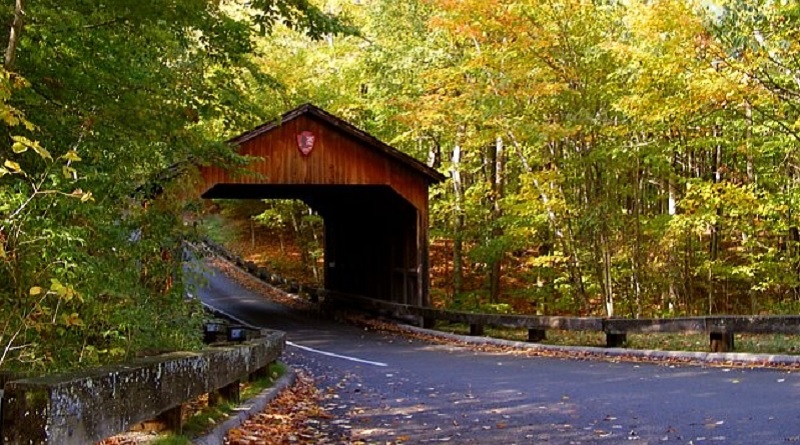 Autumn has always been my favorite season! The vibrant colors – reds, oranges, yellows – mixed with the cooler days and the aromas of the harvest. As a kid, I loved fall – because it mean it was time to return to school (yes, I realize how crazy that sounds). Just recently, while going through boxes of childhood mementos, I found the index from my high school leaf collection – along with one single leaf – a ginkgo! Little did I know how that project would help shape my love of Michigan’s natural wonders.

As the seasons change and the colors explode around us, I invite you to get out and explore the scenic byways and rural countrysides that make the Michigan so spectacular. Walk along the Great Lakes shorelines, visit one of the more than 300 waterfalls in the Upper Peninsula, cast a line on one of the rivers or streams, take a hike off the beaten path, pedal along one of the linear bike trails, paddle an inland lake. Or, take a drive along one of these 12 great color tour routes! 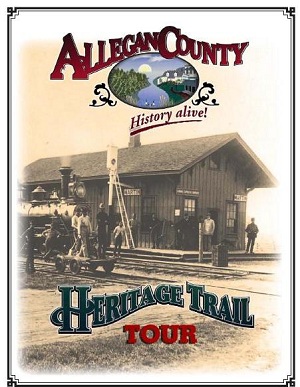 Allegan County is situated among the rolling farmlands, grasslands, forests, lakes, and streams of the southwestern portion of the Lower Peninsula. It is an area of incredible scenic beauty and historical significance, with many parts of the county existing much as they did 100 years ago. The award-winning Allegan County Heritage Trail is a driving tour that touches virtually all four corners of the county. Along the 122-mile tour route, twenty-eight historical sights have been identified and are discussed extensively in a forty-page tour guidebook and audios.

The Western Upper Peninsula is rich in history – dating back to the early mining and logging days. Now, ghost towns dot the landscape where thriving communities once stood along the Lake Superior shoreline. Lighthouses are also in abundance in this area, still guiding the coastline that they once protected when industrial ships would travel in and out of port hauling Michigan’s vast natural resources. Today, hiking and biking trails take visitors through the scenic woodlands where time seems to stand still. 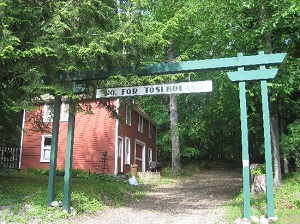 Boasting 116 miles of scenic highway, this Michigan heritage route winds through the countryside of Benzie, Manistee and Leelanau Counties – including the Sleeping Bear Dunes National Lakeshore (rated “The Most Beautiful Place in America” earlier this year by viewers of Good Morning America). Start your tour off at Camp Tosebo near Portage Lake, then meander north through quaint small towns like Frankfort, Empire, Leland, Omena and back down toward Traverse City. The area is rich with agriculture, wineries, art galleries and scenic vistas. Highlights include the Port Oneida Rural Historic District – a collection of preserved turn-of-the-century farms housed in the national lakeshore region. 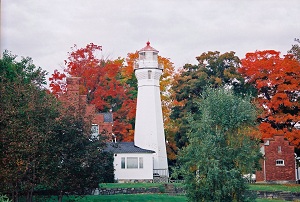 This 155-mile scenic route follows an arc-like shape closing along the Lake Huron and Saginaw Bay shore of the “Thumb” in the eastern Lower Peninsula, between Bay City and Port Huron. As part of the Lake Huron Circle Tour, this route is rich in maritime history and home to several lighthouses. Port towns dot the coastline, reminiscent of days gone by – such as Port Austin, Port Sanilac and Harbor Beach. A 1.5 mile portion of M-25, through Bay City, is designated as a Historic Heritage Route. Visible from the road is the Bay County Building, which is on the National Register for Historic Places. The area also contains 48 pre-1900 and 32 1900-1929 structures, which are also on the National Register as part of the Center Avenue Historic District.”

While the entire M37 highway travels more than 220 miles through Michigan’s lower peninsula, it is the 13-mile stretch along the Old Mission Peninsula which gains most recognition. The Old Mission Peninsula is home to seven award-winning wineries and countless apple and cherry orchards, vineyards and now a growing number of hopyards, many with spectacular views of both East and West Grand Traverse Bays, situated along the 45th Parallel (halfway between the North Pole and the equator). At the tip of the peninsula is the 1870 Mission Point Lighthouse – which is open for tours and even offers an overnight keeper program. 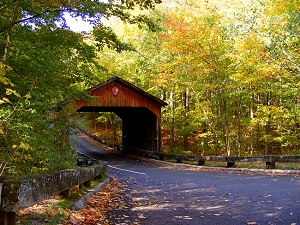 The 7.4 mile Pierce Stocking Scenic Drive is a highlight of the Sleeping Bear Dunes National Lakeshore. Stocking spent his youth working as a lumberman in Michigan’s forests, walking the bluffs above Lake Michigan – awed by the views of the dunes, Lake Michigan and the islands. Planning for the road began in the early 1960s and it was opened to the public in 1967. Stocking operated and maintained the drive until his death in 1976 and the following year it became part of the National Lakeshore. Several years later, the drive was renamed in Stocking’s honor. 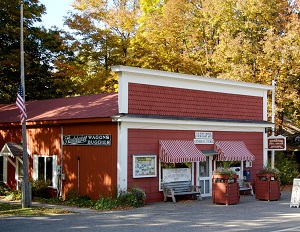 This 27.548-mile state trunkline travels along the Lake Michigan shoreline in Emmet County, starting at US31 near Bay View (Petoskey) and traveling through Harbor Springs, Good Hart and Cross Village. On average, between 2000 and 15,000 vehicles travel this scenic byway. The “Tunnel of Trees Scenic Heritage Route” encompasses the area north of Harbor Springs to Cross Village, where Bluff Drive becomes Lake Shore Drive. The massive oak, maple, birch and cedar trees are so full and vibrant, that they create a “tunnel” over the roadway – which is actually an old Ottawa trail. Highlights include Good Hart General Store and Legs Inn in Cross Village.

Traveling 16.963-miles from US-131 outside of Bradley to M-43 just west of Hastings in Barry County (north of Gun Lake and through the Yankee Springs State Recreation Area) this route is named after Chief Noonday – an Iroquois hero of the War of 1812. Legend has it that it was Chief Noonday who carried the body of Tecumseh, Pawnee leader of the Indian warriors, from his final battlefield. Chief Noonday was also instrumental in the negotiations that opened much of Michigan to settlement. Living out his last years in the Yankee Springs area at Slater’s Mission, his grave lies near Prairieville. The local chapter of the North Country Trail is also named after Chief Noonday. Highlights include the Arts & Eat agri-cultural tour through Barry and Allegan counties, October 20-21.

This highway runs through the Upper Peninsula in two segments, entering the state at Ironwood and ending at St. Ignace, briefly traverses the state of Wisconsin. The highway passes through parts of the Copper Country State Forest and Ottawa National Forest. There are six bridges along current or former sections of US 2 that are listed with the Michigan’s Historic Bridges; two of these are also listed on the National Register of Historic Places. Other highlights on or near this route include the Mackinac Bridge – opened in 1957, GarLyn Zoo – where visitors can hand-feed whitetail deer, pygmy goats, llamas and even Fuzzy the bear; and Fayette Historic State Park – an 19th century iron smelting ghost town, located on the Garden Peninsula about 18 mile south of US2, between St. Ignace and Escanaba.

Also known as the Sauk Trail, this is one of the earliest roadways in Michigan, roughly following a route from Lake Erie to Lake Michigan.. Paleontologists have excavated portions of the longest mastodon trailway ever found, dating back some 10,000 years. The indigenous people followed, establishing their migratory routes, with burial and encampment sites identified along the highway to verify their presence. The trail was later used by both Native Americans and the French as part of a lucrative fur trading profession. The route is widely believed to be an integral part of the Underground Railroad as well. In 1825, the United States government appropriated $3,000 for this federal highway, the second in the nation, which was laid out along the ancient Indian trail.

Along Michigan’s Sunrise Coast, you’ll find 200 miles of spectacular scenic views of Lake Huron and an astounding array of large public forest and recreational properties. Beginning in Standish and winding up the Lake Huron coastline, this byway offers some of the most extensive and significant recreational, ecological, historical and cultural sites in Michigan’s Lower Peninsula. Here, you’ll find historic lighthouses, noted shipwrecks, scenic waterways and countless natural wonders. Connecting to the Heritage Route in Oscoda is the 22-mile River Road National Forest Scenic Byway, which winds along the beautiful AuSable River and through the Huron National Forest. 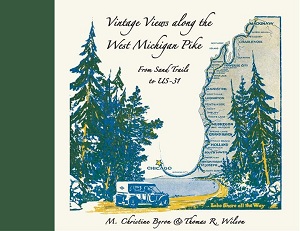 The West Michigan Pike, now US-31, is a 400-mile meandering ribbon of road, hugging the coast of Lake Michigan from Michigan City, Indiana to Mackinaw City, Michigan and passing through many small beach towns along the way. Its 1913 slogan, “Lakeshore All the Way” sums up the main feature of this gem of a travel route. The road is sometimes called Michigan’s Route 66, and is part of the Lake Michigan Circle Tour.

In their new book, Vintage Views Along the West Michigan Pike: From Sand Trails to US-31, seasoned authors M. Christine Byron & Thomas R. Wilson tell the story of this road’s early beginning as serpentine sand trails and rutted dirt pathways and its transformation to US-31 used by today’s traveler. Available at bookstores throughout Michigan or via Arbutus Press: www.arbutuspress.com.