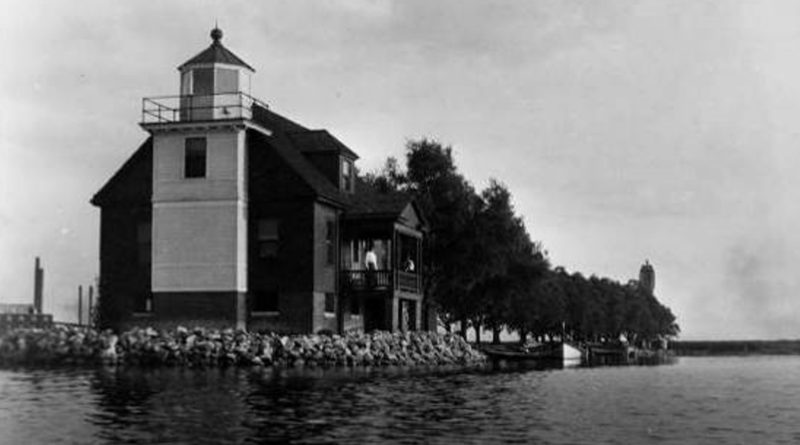 Originally built in 1849 (and rebuilt in 1866) in the Detroit River, the Mamajuda Lighthouse has been gone for more than 70 years now – the last keeper leaving in 1921. It once stood on the submerged 30-acre Mamajuda Island (often called Mammy Judy after a Native American woman with the same name). As early as 1796, this island – listed as “Jones Island” – was showing up on French maps of the Detroit River.

Barney Litogot (also spelled Letogot or Lebigot) was the sixth of 13 keepers in this light’s short history. The Litogot family story is an interesting one… 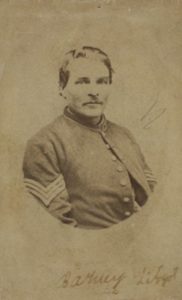 Barney was the third of four siblings born in the Dearborn area in the 1830s or early 1840s: three boys (Sapharia, John and Barney), and a girl…the youngest, named Mary. One source notes that their mother died while giving birth to Mary and that their father – a prosperous farmer – died about 10 years later. The names of their parents aren’t readily known. The orphaned children were sent to live with family and friends of their parents. Barney (11) and Sapharia (14) were living with Rebecca and Edward Williams while Mary is noted as a “foster daughter” to Patrick O’Hern (or Ahern) and his wife, Margaret and was an “acknowledged child” (adopted?) at age 3. We will come back to more of Mary’s story…

Little is known about the brother, Sapharia, other than he sued a man for taking off with his wife in the 1870s (as noted in a couple newspaper articles).

In May of 1861, Barney married Caroline Amelia Taylor and the following year, he and his brother, John, enlisted in the Michigan 24th Infantry (Company K) to fight in the Civil War, mustering out of Detroit on August 15, 1862. Sadly, John died in the very first battle they fought together at Fredericksburg, VA, in mid-December 1862. Barney continued his service, fighting in major battles including Wilderness, Spotsville, Cold Harbor and Gettysburg (where he lost a couple fingers on his right hand).

Barney mustered out of the Civil War in June 1865 as a sergeant and returned to Michigan as a farmer, husband and father (he and Caroline had five children, only two lived into adulthood). Barney was appointed on March 18, 1873 as keeper of the Mamajuda Lighthouse. Unfortunately, he died 9 months later – just two days before Christmas. Barney (and at least three of his children) are buried in the Oakdale Cemetery (also known as the Sandhill Cemetery) in Taylor Township, Wayne County. An historical marker notes that Barney Letogot – veteran of the 24th Michigan Infantry, who fought at Gettysburg, is buried there. 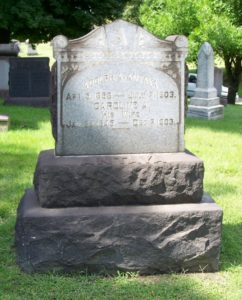 Caroline was appointed temporary keeper January 8, 1874 while the Superintendent of Lighthouses accepted nominations for a permanent keeper. During this period, several keepers near and far sent letters to the U.S. Lighthouse Services recommending she be given the formal appointment – which finally happened on June 26, 1876 (more than 2 years later). She earned $520 a year for her services and held the position for a total of 11 years before she resigned in 1885 and later remarried (Aldophie Antaya). She passed away on December 7, 1903 and she is buried in the Woodmere Cemetery in Detroit. 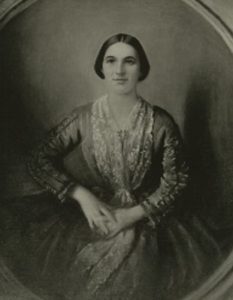 Now…back to Mary Litogot…it is said she was just a young girl when she first saw William Smith Ford who at times worked for her father (who had amassed 240 acres of farmland). Later, William would purchase 40 of those acres and eventually, he would marry Mary (April 25, 1861) and they would subsequently have five children: three boys and two girls…their first born being the one and only…Henry Ford.

Mary Litogot Ford died in 1876 at the age of just 37 (when Henry was just 13 and his youngest brother, Robert, was just three) and is interred at Ford Cemetery in Detroit.