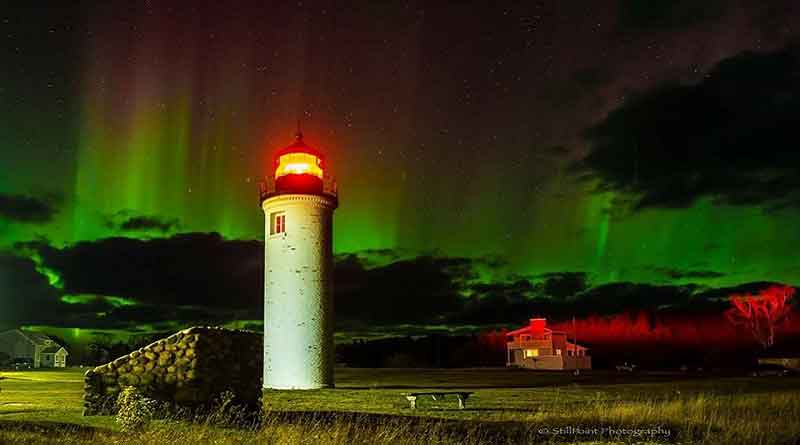 Family heritage has always been important to me—being a child of an active genealogist. While other kids were headed to Disney in elementary school, we went off in search of our family roots in libraries and cemeteries around Pennsylvania and New York. Little did I know that that two-week trip between fourth and fifth grade would play such an important role in my adult life.

On my father’s side, our family heritage is English and Scottish. On my mother’s, it’s German and Irish (my maternal grandmother was a MacDonald). Growing up, my favorite color was green (explains my love of MSU), so I guess it makes sense that I find the myself drawn to the Irish communities found in Michigan. At the top of the list is Beaver Island, a place I first visited nearly 20 years ago while working at the West Michigan Tourist Association. I’ve been back a dozen or so times since then, and now that I actually live in Charlevoix County, it’s just a stone’s throw away.

Beaver Island is the largest inhabited island in the contiguous United States, located in northern Lake Michigan about 32 miles from Charlevoix. It is also the largest of islands in the Beaver Island archipelago and is affectionately known as “The Emerald Isle” due to its rich Irish heritage. And while the majority of the island’s current 550 or so year-round residents are of Irish descent, it is often the island’s Mormon history which is most readily shared.

In the mid-1880s, James J. Strang founded the Church of Jesus Christ of Latter Day Saints (Strangite) on in Wisconsin, in the wake of the death of Joseph Smith, founder of the Latter Day Saint movement. Most Latter Day Saints considered Brigham Young to be Smith’s successor, but Strang had his own vision. He moved his followers to Beaver Island in 1848, where they developed a strong community in the town of St. James (named after Strang).

His followers built a road called “King’s Highway” (which today remains one of the main thoroughfares on the island), cleared land, developed farms and established a permanent settlement. Once established, Strang declared himself a polygamist, a practice which he had previously opposed, and during his life he had five wives and fathered a total of fourteen children. He proclaimed himself king over his church and he was crowned on July 8, 1850.

While the majority of the island followed Strang’s religious beliefs, not all were supporters and on June 16, 1856 he was shot by two local men. He died less than a month later, on July 9, 1856 and soon his flock was forced off the island.

The Irish had begun to find their way to the Beaver Island area during Strang’s reign, but he and his followers forced them to the outlying islands when they didn’t heed the religious believes and ideals. Following his death, the Irish fishermen who had taken up residency on nearby islands returned to Beaver Island, which reminded them of their homeland in County Donegal (and as such, the large bay on the northwest side of the island is known as Donegal Bay). The island’s Irish population flourished. Early church services and even ordinary conversations were conducted in Gaelic for many years. The Irish fisherman also played an economic role in the growth of Beaver Island and in the late 1880s, this was the largest supplier of fresh-water fish consumed in the United States.

Today, Beaver Island is a popular vacation spot, drawing outdoor enthusiasts of all kinds. Fishing, kayaking, hiking, biking, birding and sky-viewing (including Northern Lights) are among the top activities summer. Several events are held throughout the year, beginning the season with the St. Patrick’s Day celebration (March 16-18, 2018).

The island boasts two historic lighthouses (St. James Harbor Light at Whiskey Point and the Beaver Head Island Light), several museums and a small but active downtown area with restaurants (including the Shamrock), lodging properties (like The Emerald Isle), shops and a Community Center. The island even has its own radio station (WVBI), newspaper (Northern Islander) and magazine (Beaver Beacon).

McDonough’s Market, located a short walk from the harbor, has been in business since 1933 and celebrates its 85th anniversary this year. It sits next to Dalwhinnie Bakery & Deli, which opened in 1985 (the name Dalwhinnie is derived from the Gaelic word Dail Chuinnidh, which means “meeting place”). The McDonoughs themselves have now seven generations of heritage on the island, both as residents and business owners.

Beaver Island has two airports, with year-round flights via Island Airways and Fresh Air Aviation, both out of Charlevoix. It is also accessible via the Beaver Island Boat Company during the warm-weather season (scheduled runs will begin mid-April).

Other cities in Michigan with Irish heritage include:

For a list of Irish-themed events coming up in celebration of St. Patrick’s Day this weekend, visit Michigan.org.