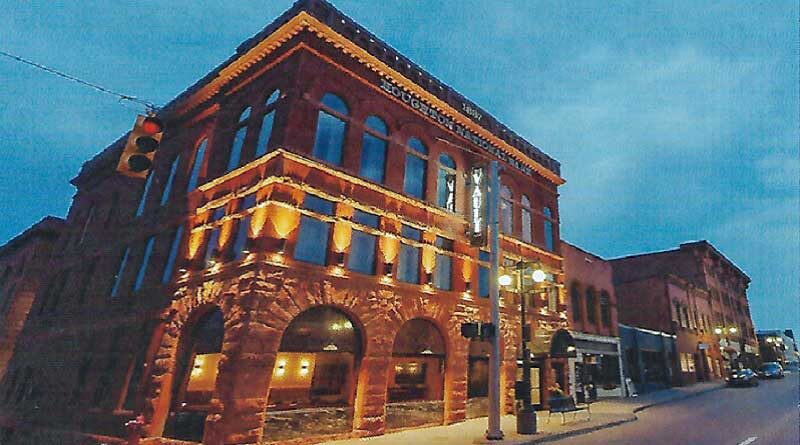 When prospectors struck it rich during the mining boom (roughly 1840-1900) in Michigan’s Keweenaw Peninsula, they deposited their profits into institutions such as the First National Bank of Houghton.

Built in 1887 to offer premium banking services, the bank was the first masonry structure in the western Upper Peninsula. It later became known as the National Bank of Houghton and Houghton National Bank before becoming a Wells Fargo branch, which later relocated.

This towering brick building at the corner of Shelden Avenue and Isle Royale Street in downtown Houghton still delivers first-class service as a modern 17-room hotel called The Vault. The transformation was developed and designed by Jen and Jon Julien, owners of the Houghton-based firm Braveworks. They opened the hotel in 2019.

Each of the hotel’s three levels is uniquely themed to impart a mood of modern sophistication, while embracing the building’s original historic elements.

“The most prominent features of the Richardsonian Romanesque-style building are the textured exterior and the large, flat-paned windows,” according to the Biographical Dictionary of Copper Country Architects website, developed by Professor Kim Hoagland, an architectural historian at Houghton’s Michigan Technological University. “The rough-faced Jacobsville sandstone first floor has large, round-arched windows and doorways. Above, the walls are brick with sandstone beltcourses. The third floor windows are round-arched. The walls meet the flat roof through a decorative cornice, capped with an elaborate parapet.”

Upon arrival, guests find themselves in a bright and open lobby, with the original teller windows and numbered safety deposit boxes displayed alongside sleek modern furniture and vivid pops of color. There’s no front desk, but staff are quick to welcome visitors and check them in. A locally sourced complimentary breakfast is served each morning, and a selection of snacks and beverages (also complimentary) are available 24/7.

The rooms on this floor reflect “Old Money,” featuring jewel tones of ruby and emerald. This level boasts the most coveted room of the hotel — the Vault Chamber room, built around the bank’s once-operational vault and encased by 1800s-era steel railroad beams, 18 inches of fortified concrete, and a two-ton impenetrable door with its original hardware.

The second floor highlights the theme “New Money,” with sleek lines and geometric patterns alongside period photographs. A two-bedroom, two-bathroom suite also is on this level. The third level evokes “Found Money,” and has a bold metallic palette and impactful images. Every room on the top floor offers a view of downtown Houghton and the Portage Canal, where float planes are often seen taking off or landing during warmer months.

A limited number of rooms offer soaker tubs, built-in fireplaces, and private balconies with café-style seating (accessible seasonally). Two suites that are suitable for families provide additional living space and pull-out sofas. Throughout the hotel, Art Deco-style fixtures are found next to contemporary elements such as the modern touch-screen lighted, fogless mirrors in the bathrooms and bedside charging stations.

“The Vault Hotel is a true gem in Michigan’s Upper Peninsula. I’ve never stayed in such a unique hotel,” says Sherry Kepsel, of Rochester Hills, who checked in for a few nights last year while visiting her son at Michigan Tech. “The room was classy and comfortable, with amazing attention to detail. I absolutely loved the window seats in every window. The hotel has the look and feel of a fancy hotel in a big city, with the coziness and friendliness of small-town northern Michigan.”

The newest feature at The Vault is the lower-level classic cocktail bar known as The Counting Room. With capacity for 25 people, this exclusive and somewhat hidden speakeasy is only open to hotel guests and members (who are provided a gold-plated key card for entry).

Much like a step back in time, this space is a juxtaposition of exposed century-old sandstone walls and ductwork, antique furniture sourced from Vertin Gallery in nearby Calumet, an upright Steinway piano, and a six-seat bar with three layers of shiny pennies inlaid in the top. The bartender will ask you how many pennies there are, if you care to make a guess.

Drinks served here are historic in name only. Skilled mixologists use house-made syrups, hand-cut ice, and an array of spirits — including some distilled in Michigan, such as Iron Fish Distillery’s Woodland Gin — to craft their own style of signature cocktails. Impressive wine and beer lists are also available.

It’s easy to settle into this space and lose track of time, but when hunger strikes, the iconic The Library restaurant, with its inviting food and beverage menu, is just steps away.

After experiencing such a warm welcome in Houghton, the Juliens and Braveworks are now setting their sights on a new project in Marquette, some 100 miles to the southeast, overlooking Lake Superior.

ON DECK
Braveworks recently purchased the historic 1892 Marquette Savings Bank building on the corner of Washington and Front streets, with plans to bring The Vault Hotel concept to Marquette.

PLAN IT!
The Vault Hotel
thevaulthotel.com

Reprinted from the Summer 2022 issue of Michigan BLUE magazine.