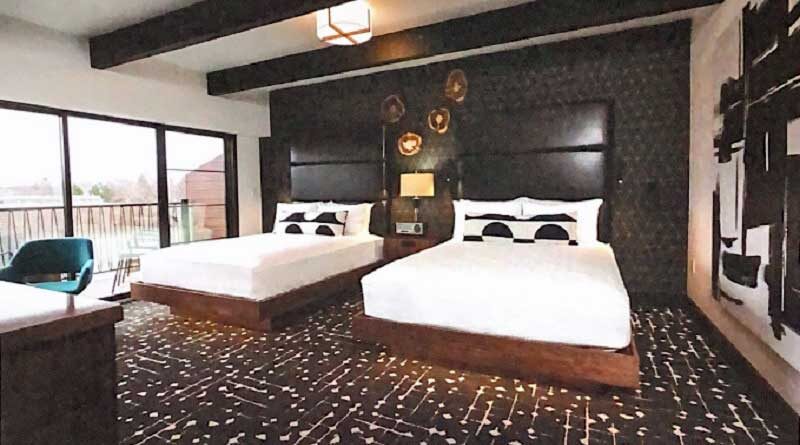 A century ago, Charlevoix architect Earl Young first began moving rocks and boulders of all shapes, sizes and colors, turning them into a series of unique homes, inns and lodges which remain a foundation of this Lake Michigan shoreline community.

Back in 1959, the Michigan native opened the Weathervane Lodge – affectionally called “The Lodge” – a two-story, 36-room complex designed in the Mid-century Modern style.

In 2018, the historic and well-worn motel was purchased by Silva Property Management. After an investment of more than $5 million, the dated structure was transformed into an elegant, three-story, 56-room boutique hotel. The massive boulder at the entrance, which has welcomed guests for generations, stands just as proudly as it always has, with a new neon sign that reads Hotel Earl — a tribute to the visionary builder.

Located on U.S. 131 just steps northeast of Charlevoix’s famed drawbridge and across the road from Stafford’s Weathervane Inn (built by Young in 1955), the Hotel Earl has become a friendly gathering place for locals and visitors.

The check-in area and Lobby Lounge are adorned with rich wood tones and accents, along with vibrant splashes of color, while whimsical furniture and décor add to the hotel’s charm. The bar, which is open to the public, serves tasty light fare as well as handcrafted cocktails and a selection of Michigan beers.

“From the beautiful grounds to the exceptional rooms, this place is amazing,” Jessica Jordan says of a recent trip to Hotel Earl. “I’ve traveled to many hotels, and this hotel is one of the best. It’s very complementary of the city of Charlevoix, and close enough to walk to various things to do.”

The most coveted unit in the hotel is the 1,500-square-foot, third-floor Earl Suite. Perfect for bridal parties or other special occasions, the space includes one bedroom, two bathrooms (one with a soaker tub), a large living room with a fireplace, an adjoining full kitchen, a washer/dryer, and a large private balcony that overlooks Michigan Avenue, with views of Round Lake.

New features at Hotel Earl include an indoor swimming pool with a ceiling waterfall, an outdoor hot tub, and an enhanced fitness center, as well as a high-tech, 12-seat private boardroom, and rooftop deck, popular with sunset-watchers and photographers.

“I’m thrilled to have the opportunity to continue the legacy of this property while honoring the design originally created by the architect and builder, Earl Young,” says Paul Silva, owner of Hotel Earl. “I’m proud that we were able to embrace the origins of this hotel while creating a modern showplace destination.”

Those inspired by Earl Young’s work should take a drive (or walk) through the Boulder Park neighborhood (southwest of Hotel Earl, near the Lake Michigan shoreline). Affectionately known as “Mushroom Houses” or “Hobbit Homes,” these one-of-a-kind fairytale dwellings reflect Young’s desire to incorporate nature into everything he built. Every stone, no matter its mass, was unearthed by Young himself, then purposely placed and meant to stand the test of time.

GEM Car Tours, which travel past all 28 local Earl Young homes, are offered April through November by the award-winning company Mushroom House Tours. Edith Pair founded the company in 2009 and began by offering walking tours, before adding transportation for up to 11 passengers.

Reprinted from the Spring 2022 issue of Michigan BLUE magazine.