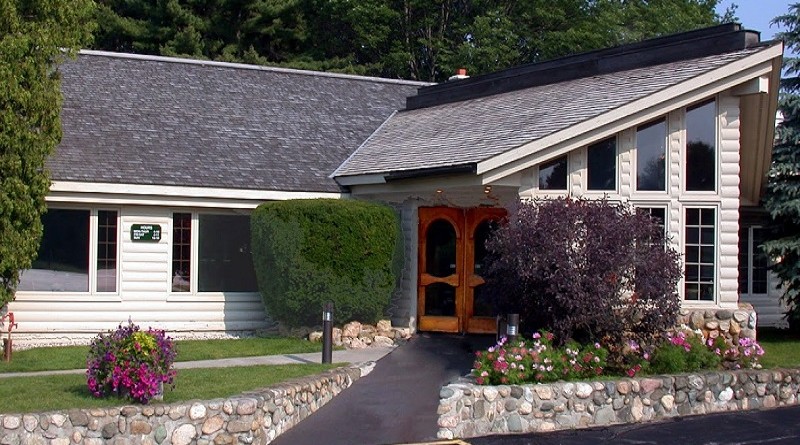 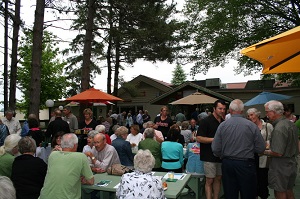 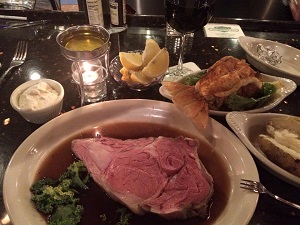 This legendary restaurant serves up the finest seafood, steaks and prime rib, earning them the distinction as one of northern Michigan’s landmark destination eateries. Generations of locals and visitors make regular visits to Boone’s for its unparalleled pairing of mouth-watering menu items and Midwestern customer service. At Boone’s, guests are treated like family…and that’s what keeps them coming back, time and time again! 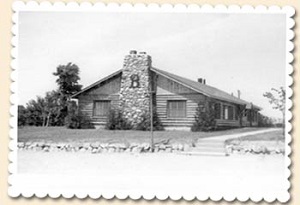 Back in the old logging days there was a sawmill on the eastern shore of Long Lake, just a stone’s throw west of where Boone’s Long Lake Inn now stands. Only a few people today remember much about it, and there’s no trace of the Mill itself except what’s in the lake. Pine slabs and edging keep washing upon the beach after a storm and once in a great while a sixteen-foot white pine log will surface from its century or more long sleep at the bottom.

Somehow it seems fitting that the original Inn was built of massive pine logs by William R. Bellaw in 1949. Bellaw was the head cook at the Traverse City State Hospital and was also a well-known hunting and fishing camp cook.

Bellaw named his restaurant Bellaw’s Log Cabin Inn. It was quite small with only a few tables and no bar but with the same massive fieldstone fireplace that somehow managed to survive a serious fire in 1989. It was a family-type restaurant that served chicken, steaks and fish. Bellaw died in 1951, but the family continued to operate the Inn until it was sold in 1958. Subsequently, it changed hands several times, operating primarily as a country-western bar. A few longtime locals recall the long “Penny Bar” and the famous country-western performers such as Loretta Lynn and Stonewall Jackson who played on which is still referred to as the “Dance Floor”. 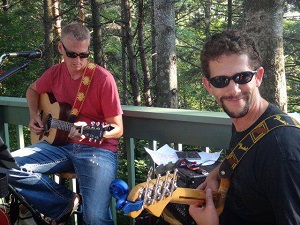 Then, in 1980, after the place stood empty for several years, restaurateur Barry Boone bought the property and completely remodeled the dining room and kitchen, as well as adding the deck and patio bar. He named it “Boone’s Long Lake Inn”, and it was an immediate success. His policy was to offer top quality steaks and seafood in astonishingly generous portions. Prime Rib in both 12 oz. and 22 oz. portions were only available on Sundays. 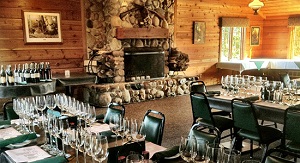 In 1985, Traverse City native and current owner Nick Boudjalis joined the Boone’s staff as a bartender who Barry soon promoted to Manager. The business continued to grow to the point that expansion was clearly necessary. In October of 1988, work started on a major addition which included the northeast dining room and much-needed expanded kitchen. The staff and guests all worked through the construction that was completed in March of 1989. The Inn looked great! One month later on April 17th, 1989, a serious early morning fire destroyed the main dining room and much of the new kitchen. Easling Construction came back on the site and the” Long Lake Inn” arose from the ashes and reopened June 26th that same year. 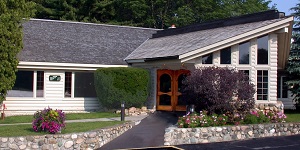 The crowds returned immediately and the business continued to grow. Nick bought a stake in the business in 1993 and took it over completely in 1997. Nick carries on the proud tradition of the historic old Inn and has added a few subtle improvements while preserving the Long Lake Inn’s reputation for warm hospitality and good, plentiful food and drink.

Oh, in case you were wondering, the original big letter “B” on the face of the fireplace chimney outside, which stood for Bellaw, now stands for all three of its principal owners, past and present: Bellaw, Boone and Boudjalis. Cheers!