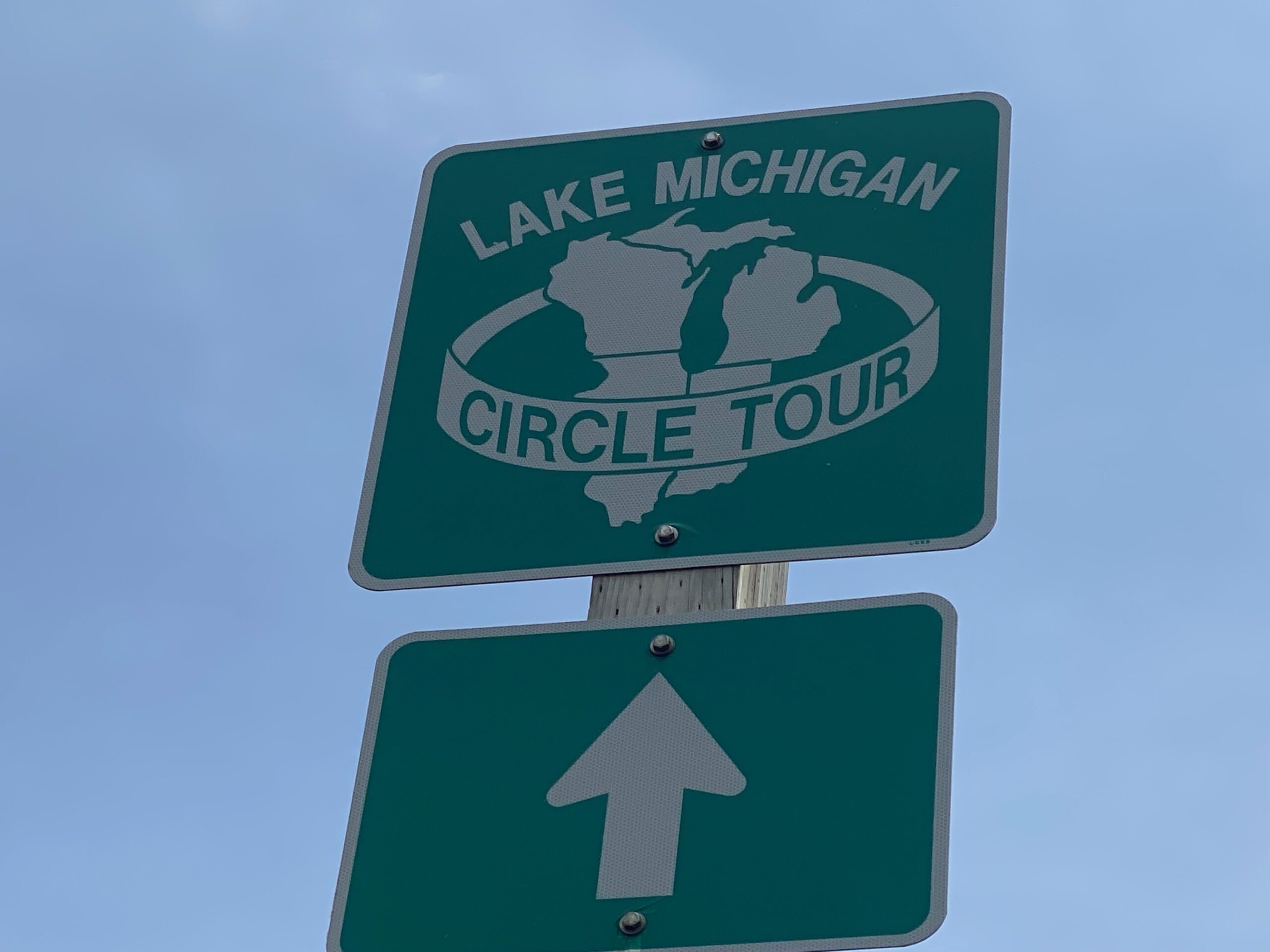 Four out of five Great Lakes (all those touching Michigan) have an official “Circle Tour” route that were each established to encourage travel to the unique small towns and larger urban centers found along the way.

In 1985, Michigan’s then First Lady Paula Blanchard (who was married at the time to Michigan Governor James Blanchard) was the first to publicly mention the idea of a “Circle Tour” around Lake Superior while attending a tourism conference that fall.

People had been looping the lakes for many years based on newspaper clippings: a 1961 article in the Detroit Free Press references a “Round Lake Superior Circle Tour” map while other articles into the 1970s mention group tours offered along the unofficial route. Yet, it wasn’t until Paula Blanchard tossed the idea out there that the Michigan Department of Transportation (MDOT) jumped on the idea. They coordinated with their counterparts in Wisconsin, Minnesota and Ontario and within a year had put a plan together and established the first official such route in the Midwest.

Here’s how things played out over the next few years…

Now…back to the LMCT (as the Lake Michigan Circle Tour is affectionally referred to). This year (2022) is the 35th anniversary of this popular road trip route. 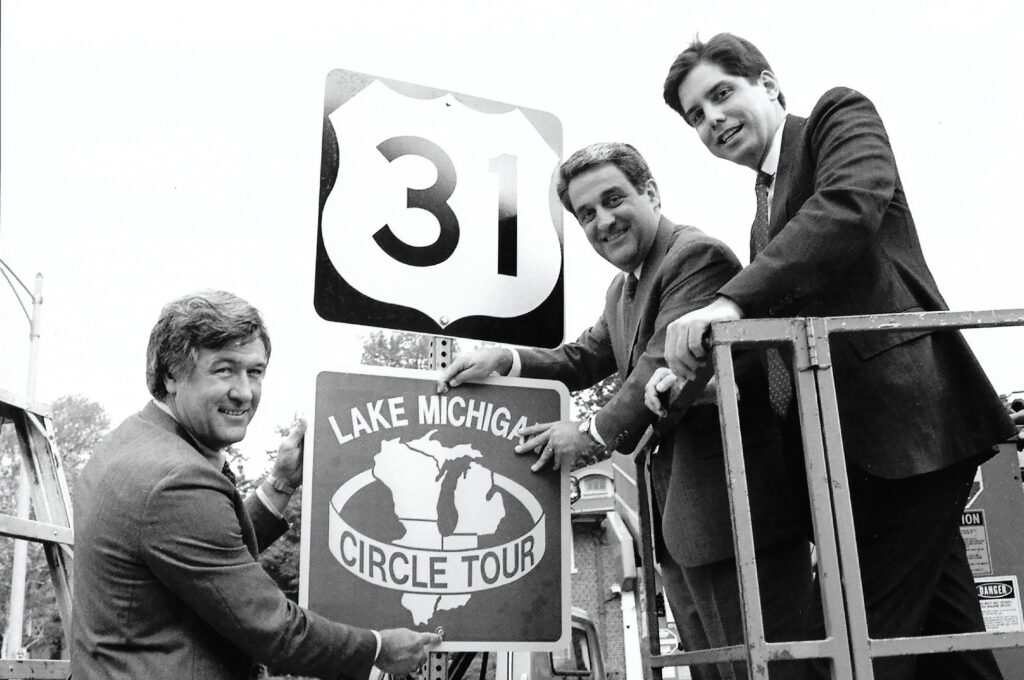 Jack Morgan was working for MDOT in the mid-1980s and he spearheaded efforts for the second of the Great Lakes’ “Circle Tour” routes. Just 14 months after this idea was introduced, an agreement to designate and fund it was reached between the governors of Michigan, Wisconsin, Illinois and Indiana. In 1998, the route was mapped and signs were posted along all 1100 miles of Lake Michigan’s shoreline. 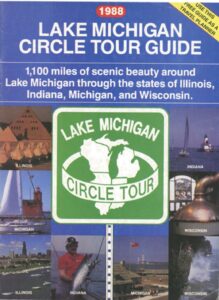 Now, it was time to market this route! The West Michigan Tourist Association (WMTA) – which was formed in 1917 as the Michigan Tourist & Resort Association – had a longstanding history of publishing quality travel guides and they took charge of the first and only official Lake Michigan Circle Tour Guide, which premiered in 1998.

When the Chicago Tribune and Milwaukee Journal ran articles announcing publication of the colorful, 52-page guide, no one on WMTA’s staff anticipated the public reaction. On Monday following the story, 150 callers from the Chicago area alone requested the new publication. Two days later, an overburdened mail carrier unloaded 700 requests for the Guide from Illinois and Wisconsin. The next day, more than 1000 mail and phone requests poured in. 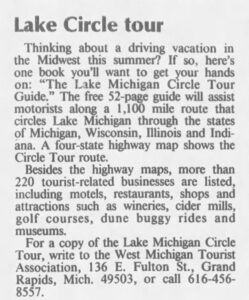 On its 10-year anniversary in 1998, the guide was rechristened the Lake Michigan Circle Tour & Lighthouse Guide. The locations of dozens of beacons were added to its Circle Tour map. The map index was expanded to include the year each light was constructed, whether it is active and whether it is accessible to the public. The publication identified 113 lighthouses and crib, tower and shoal lights around Lake Michigan. Its index also includes data on each light’s original Fresnel lens order, tower height and state/national historic recognitions.

In 2000, Straits area lighthouses were incorporated into the map. Although some are located in Lake Huron, they can be viewed via excursion boats and Shepler’s Mackinac Island Ferry out of Mackinaw City. Once nearly impossible for the earthbound traveler to see, these shoal and crib lights are now viewable from the water by anyone wishing to pay the fare.

WMTA created its online Lake Michigan Circle Tour & Lighthouse Guide in 2001. Far more comprehensive than the annual publications, it includes turn-by-turn directions for those who need them. 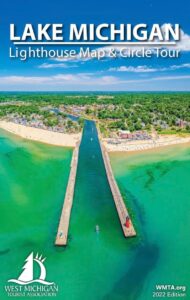 In 2007, WMTA envisioned the Lake Michigan Circle Tour & Lighthouse Guide being changed into a map – a complete source for discovering the lighthouses that dot the Lake Michigan Shoreline. The map was introduced to travelers with rave reviews the following year and remains a frameable keepsake for lighthouse enthusiasts. Each lighthouse on the route is identified with an icon, making it easy for travelers to plan their trip to these historic beacons. Nearly two dozen lighthouses are also highlighted each year and contain additional structural details, accessibility information and special features of each selection.