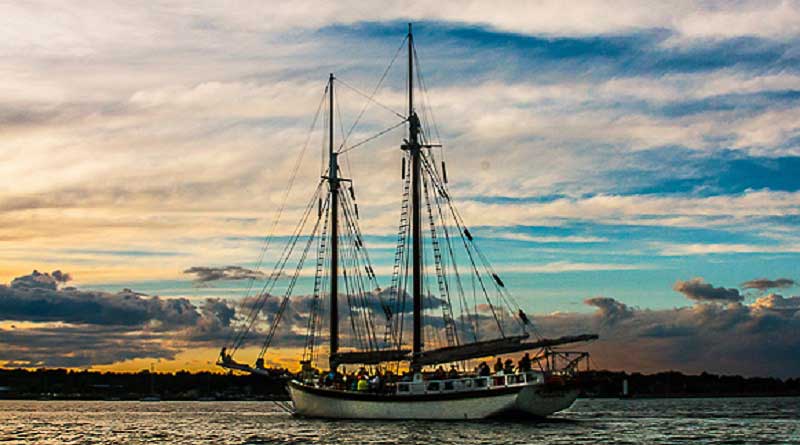 When was the last time you just let go of all your deadlines and responsibilities and just kicked back to relax? Where the only distractions are the waves underneath you, the sunshine above you and the 360-degree views of the northern Lake Michigan shoreline surrounding you. Where your direction is set by the wind and the only scheduled activities are breakfast, lunch and dinner. 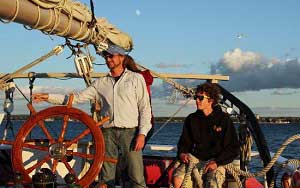 You’re invited to set sail aboard the Tall Ship Manitou – one of the largest sailing ships on the Great Lakes – during a 6-Day Windjammer Cruise, September 17-23. Guided by the passionate, skilled and entertaining crew of the Traverse Tall Ship Company, this voyage sets sail out of Grand Traverse Bay aboard a replication of an 1800s “coasting” cargo schooner. A traditional two-masted, gaff rigged, topsail schooner, Manitou measures 114 feet in length with more than 3000 square feet of sail. Passengers are free to leave the sailing to the experienced crew, but it’s much more fun to lend a hand and learn the arts of the sailor. 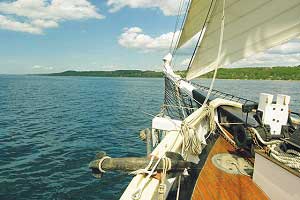 It’s likely Manitou will sail near the 200-acre Power Island toward the northern end of West Bay, just three miles off Bowers Harbor. It was also known as Marion Island or Ford Island, as auto giant Henry Ford owned it between 1917 and 1944. A seasonal visitor to Traverse City, he and his pals, Thomas Edison and Harvey Firestone, were known to explore the rustic shoreline and trails.

Maybe Manitou will make its way around the tip of the Leelanau Peninsula (where the Grand Traverse Lighthouse proudly sits, protecting the coastline) toward the Sleeping Bear Dunes National Lakeshore—named after a Chippewa legend and representative of the mother bear who lays perched at the top of the dunes watching out over her two cubs—North and South Manitou Islands.

If the winds are coming in from the southwest, Manitou may venture north toward Beaver Island, where Mormon leader James Strang declared himself king in 1850 before being assassinated just six years later by a few of his former followers. 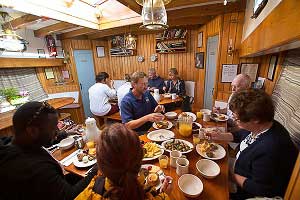 Trips are limited to 22 individuals, with accommodations provided in 11 double-bunk cabins. Fare includes lodging, all meals and sailing activities. The cost of the trip is $939 per person, based on double occupancy. The minimum age to participate in the multi-day cruises is 12.

To make reservations for the 6-Day Explorer Cruise, call toll free (800) 678-0383 or order tickets online. Gift certificates are also available. For additional information about the Manitou, including its corporate charters, log on to www.TallShipSailing.com. 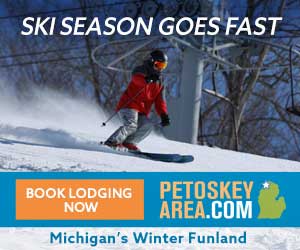