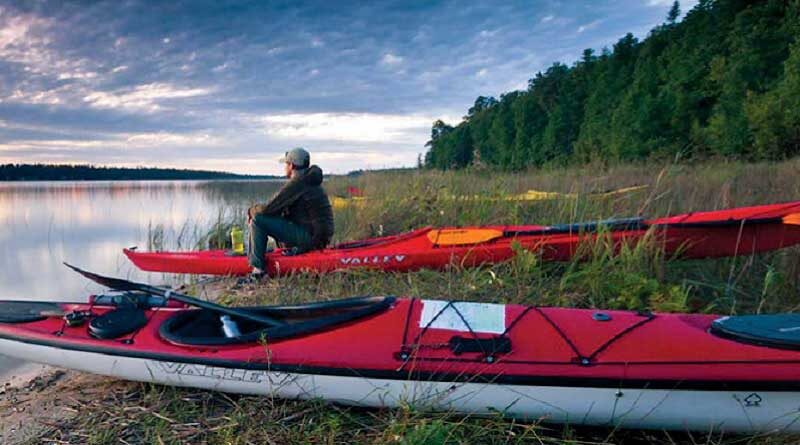 The narrow waterways weaving through Les Cheneaux Islands in northern Lake Huron have welcomed an array of boats over the past 350-plus years – from the early Native Americans and French voyageurs in birch bark canoes to generations of tourists arriving by steamer and later residents cruising along in their wooden runabouts.

Pronounced “Lay-Shen-O” and affectionately called “The Snows,” this area stretches for 12 mainland miles and encompasses an idyllic 36-island archipelago that appeared on maps hand-drawn by Father Jaques Marquette as early as 1670. Residents would ultimately name their largest island after this Jesuit missionary.

Accessible exclusively via boat, Marquette Island is home to Les Cheneaux Club (founded in 1888 as the Les Cheneaux Island Resort Association). The earliest members summered in canvas tents perched upon wooden platforms or unfished frame cabins. Over time, the elite from large Midwestern cities constructed cottages and boathouses, as well as a large clubhouse and hotel.

Among those early families were Wisconsinites Carl and Clara Leopold, and their son, (Rand) Aldo – who would go on to become a noted American naturalist, ecologist, conservationist, environmentalist and author of A Sand County Almanac (1949). Each June, his legacy is celebrated with an annual nature-focused festival.

Boaters can access Marquette Island at Leopold Landing on Duck Bay (operated by Clark Township) and explore the nearly 1,700-acre Aldo Leopold Nature Preserve – one of three island sites maintained by the Little Traverse Conservancy. Marquette Island has no roads, so visitors should be prepared to hike.

Marquette Island is also the home of Les Cheneaux Yacht Club, a reciprocal member of the Yachting Club of America which represents approximately 150,000 boaters and over 600 registered yacht and sailing clubs throughout the country.

Just off the northeast side of Marquette Island is Les Cheneaux’s one-of-kind house on Dollar Island. Legend has it that the government sold this 0.6-acre island for a single dollar (thus the name) and over time an elaborate 3-bedroom, 2-bath Aladdin-esque cottage – complete with a 3-stall boathouse, wrap-around deck, gazebo and waterfront “kissing booth” – has been constructed.

Sitting just under 2.5 miles apart along the M-134 North Huron Scenic Byway, Hessel and Cedarville are midway between St. Ignace to the west and DeTour Village (the access point to Drummond Island) to the east. Together, these mainland cities evoke a laidback coastal vibe.

“Many bays among the islands offer protection from winds, so boaters can usually find an area of calm waters no matter the wind direction,” says long-time local resident Norman Brood.

Recreational boating has been the lifeblood of Les Cheneaux area since its founding.

E. J. Mertaugh Boat Works in Hessel opened in 1925, becoming the first Chris Craft dealership in the world. These handcrafted wooden boats were built downstate in Algonac before being motored up Lake Huron to Hessel. Given both of these companies were founded during the Prohibition era, it is no surprise that some of these now-classic vessels were used to smuggle bootleg alcohol to speakeasies on nearby Mackinac Island.

The docks here are also the setting for one of the Great Lakes’ most prestigious in-water events – the Antique Wooden Boat Show, held annually on the second Saturday of August. Since 1978, this impressive exhibit features as many as 150 timeless beauties from legendary manufacturers such as Chris Craft, Century, Hankercraft, Lyman, Thompson and Gar Wood, among others.

“My Father kept his 1930 Triple Cockpit Chris Craft in Hessel at Mertaugh’s during the early 1980s,” says Bill Veneklasen, who was raised in Holland, Michigan but now lives in South Carolina. “We would tour the waters and islands in that boat for hours. Years later our family purchased a home on Coryell Island. Exploring the other islands and their special places within ‘The Channels’ are forever ingrained in my memory even though it’s been 10 years since my last visit.”
Nearly a century later, Mertaugh’s continues to service locals and visitors alike, with its fuel dock, Ship’s Store and North Coast Shop featuring sweet treats like ice cream, fudge and specialty coffees.

Sailing is also a vital part of Les Cheneaux experience, where Fleet 31 of the Ensign Class can be found. This is the largest fleet of its kind in the world, featuring more than 60 registered boats. This area so well respected that the Ensign national championships were held here in 2010.

Les Cheneaux is a picturesque layover for cruisers heading into the North Channel or into the Straits of Mackinac. Access – which is less than a quarter mile in width at is most narrow point – may seem daunting, but there are four primary access points to this maze of islands:

“On a nautical chart, the passages marked by buoys appear very narrow, contributing to the feeling when you come off the big waters of Lake Huron that you are entering a special, more intimate environment. But in years with good water and fewer weeds, these passages have plenty of room for two boats to pass,” says Sandy White, who has often navigated Les Cheneaux with her husband, Nicholas DeGrazia, on their Tiara 33500 Express (made in Holland, Michigan) Old No. 7 – named for the early 1900s toy electric train designed by Joshua Lionel Cowan (Nicholas is a former president of the Lionel Trains Inc.). “Mariners in 2021 reported having found excellent anchorages in Search Bay, Wilderness Bay and Marquette Bay.”

Government Island is a federally owned, uninhabited part of the Hiawatha National Forest System – the only totally public island in the region – maintained by Les Cheneaux Watershed Council. Once home to a Coast Guard Station, the island now boasts an extensive shoreline trail system and no trace camping for those looking for a unique wilderness experience.

Nature truly abounds throughout Les Cheneaux area, with many sites under the umbrella of the Little Traverse Conservancy open to the public for individual exploration. Woods & Water Eco Tours in Hessel offers a plethora of guided opportunities for kayaking, biking, hiking and birding. Public programs, for adults and children, are also available through the Friends of the Les Cheneaux Trails.

Start your day with a visit to Les Cheneaux Coffee Roasters in Cedarville, a family-owned, full-service artisan shop offering a variety of cold and hot beverages with fresh baked goods made daily. You’ll find bread, pastries and cakes, as well as homemade soups, salads, sandwiches and pasta, at Little Buoy Bakery, also in Cedarville.

In the heart of “downtown” Hessel, Les Cheneaux Culinary School & Restaurant is a year-round hands-on classroom offering educational programs from September through May, with students putting their skills to work at the farm-to-table eatery during the busy summer season. Among the featured beverages served are spirits from nearby Les Cheneaux Distillery.

“The distillery is definitely something that is unique to the area, since we make all of our own spirits, beer and wine,” says Katie Duman Bowlby, manager at Les Cheneaux Distillers, a local family-owned, award-winning operation in Cedarville. “Both the Bohn and Bowlby families have been in the area for generations and the local pride and support here in the area [for our products] is phenomenal. All of our spirits and cocktails are made with our area in mind. Marquette Island residents [among others] feel the extra love when ordering our ‘Marquette Mule.’”

The historic Hessel School House is home to the Avery Arts & Nature Learning Center and its new “Storybook Trail” for youngsters and their families. Winding through the woodland area around the school, the trail’s 18 stations highlight a variety of titles featuring Great Lakes lore.

Inside in the 1920s-era O.M. Reif Boathouse on M-134 in Cedarville, the Maritime Museum is chock-full of vintage boats, antique outboard motors and marine pieces, as well as historic photos that give a glimpse back in time to the area’s rich boating heritage. The nearby Historical Museum is housed in an authentic log cabin with countless displays focusing on the development of Cedarville and Hessel dating to the 1880s.

The Great Lakes Boat Building School opened in 2005 as a marine trades institution, currently offering a 12-month comprehensive program. While not open to the public, the 12,000-square-foot facility complements the design of the region’s historic structures and is worth a drive-by.

Those seeking to overnight in Les Cheneaux area will find plenty of spots for boats of all sizes.

Reprinted from the August 2022 issue of LakelandBoating.com magazine.