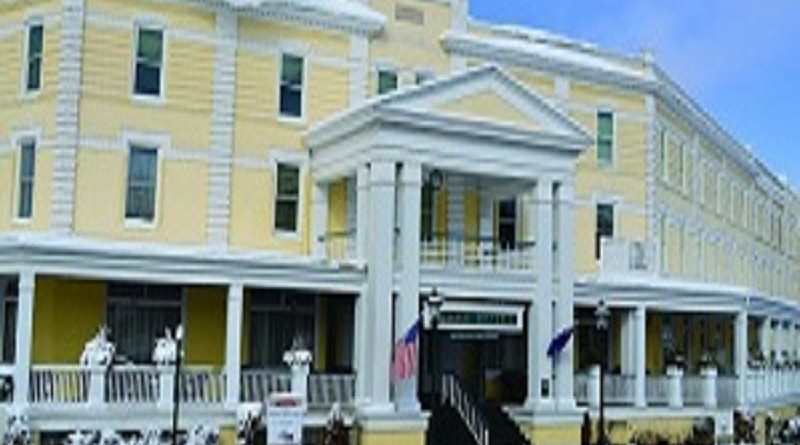 The Perry Hotel has been welcoming guests since 1899, when Dr. Norman J. Perry built it—just four years after Petoskey was incorporated as a city. He operated the hotel until 1919, when it was purchased by Drs. John and George Reycraft. They intended to convert it into a hospital, but the city’s leaders felt there was such a demand for a year-round hotel that they convinced the brothers to build their hospital in another location.

The doctors selected their nephew, D. Herbert Reycraft, as hotel manager. Under his direction the Perry Hotel became a lively center of attraction featuring a small orchestra during dinner and dances at least once a week. Its popularity demanded expansion, so the Reycrafts doubled the capacity to 300 guests when they added a four story, 46 room wing in 1926.

Herbert Reycraft and his wife, Hazel, retired in 1961. The Reycrafts then sold the hotel to John Davis, at which time Davis made extensive improvements including the panoramic window which overlooks Little Traverse Bay from the dining room. Under his ownership, he changed the name to the Perry-Davis Hotel and operated the hotel until Alan Gornick purchased the hotel in the 1970s.

Stafford’s Hospitality purchased the Perry in 1989 and over time have undertaken extensive interior and exterior restoration to this legendary landmark. It is now listed on the National Register of Historic Sites as well as its State of Michigan Register. Of the 21 hotels in operation in Michigan in 1900, the Perry Hotel is the only one still in operation today.

Located in the heart of Petoskey’s Historic Gaslight District, Stafford’s Perry Hotel delivers the grandeur and elegance of a by-gone era without leaving modern day conveniences behind. Perched high on a bluff overlooking Lake Michigan, the Perry Hotel stands as a proud symbol of the early 1900s when northern Michigan tourism was in its infancy.

Open year round, this full-service hotel boasts 79 individually-appointed guest rooms, many with private balconies overlooking the crystal clear waters of Little Traverse Bay. Many overnight lodging rates include a hot breakfast with a room stay.

The Noggin Room Pub, a casual bar and grille, is also open year round and features Michigan craft brews and local entertainment on select nights. Seasonal al fresco dining is offered on the Rose Garden Veranda and Lewis Street Porch (please call for dates and hours). Breakfast and lunch are served in the elegant H.O. Rose Dining Room, with an unmatched view of Little Traverse Bay. 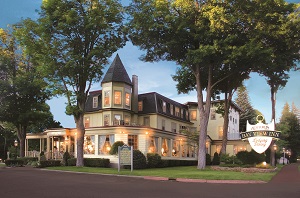 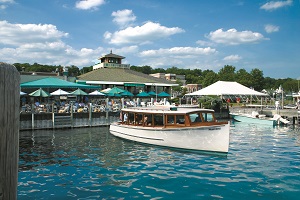 Stafford’s Pier Restaurant celebrates the maritime heritage of beautiful Harbor Springs and is considered one of Michigan’s premier waterfront dining destinations. It was literally built on the original pilings over the harbor. The Pier’s Pointer Room overlooks the historic Harbor Springs yacht basin and offers visitors a superb choice of fine cuisine. The more casual Chart Room provides a relaxed environment with a traditional menu. The Wheelhouse Lounge offers a casual watering hole and Dudley’s Deck is Harbor Spring’s most popular dining al fresco. 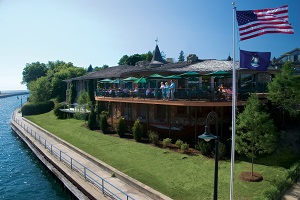 Stafford’s Weathervane Restaurant in downtown Charlevoix was originally built as a grist mill and was converted to a dining establishment in the mid-1950s. It was designed by the famed local architect Earl Young, known for his curvaceous roof-lines and flowing architecture built of massive rocks and other natural elements. The Weathervane Restaurant offers signature and regional cuisine in a relaxed atmosphere and is a true waterfront dining establishment, nestled along the busy Pine River Channel.

Stafford’s Crooked River Lodge & Suites is nestled in Alanson on the picturesque Crooked River. This family-friendly year-round hotel featuring an indoor pool and hot tub and within arms’ reach to skiing, snowmobiling, recreational and river activities. With 42 guest rooms, most with a private balcony overlooking the river, a northern adventure awaits!

The Drawbridge Bistro is Stafford’s latest acquisition, opened in July of 2014 in downtown Charlevoix next to the town’s historic bridge (and across the street from the Stafford’s Weathervane Restaurant). Guests will enjoy casual and relaxed dining while taking in the views of Round Lake and boats that travel along the Pine River Channel to Lake Michigan.

Stafford’s Gallery of Art & History is located behind the Perry Hotel’s Rose Garden Veranda and features the finest Michigan artists representing a variety of mediums including: watercolors, oils, photography, sculptures, jewelry, original and limited edition prints, gifts and accessories, and so much more. This collection of fine art is beautifully displayed in a unique warehouse building, along with exquisite antiques and Stafford’s exclusive collection of historical photos and artifacts.