Whether you’re into island hopping, beach combing, festival going, adventure seeking or trail trekking, the Great Lakes State offers something for everyone when it comes finding fun in the sun! From day trips to weekend get-aways to full-fledged, good old fashioned family vacations, a Pure Michigan experience awaits.

Michigan boasts more freshwater coastline than any other state – some 3177 miles of Great Lakes shoreline. Not to mention 11,000-plus inland lakes (more than Minnesota, FYI) and 36,000-plus miles of rivers and streams (with nearly 150 different species of fish).

Michigan is among the top five states for registered boaters and golf courses, and our $102 billion agricultural industry is second only to California in diversity (ranking #1 for several commodities and in the Top 10 for many others).

Michigan ranks #5 in the country for the number of breweries – and that July is Michigan Craft Beer Month? More than 200 breweries are found in Michigan now, from coast to coast to coast. Celebrate “Michigan: The Great Beer State” (www.mibeer.com) at the 20th Annual Michigan Summer Beer Festival, July 21-22, at Riverside Park in Ypsilanti’s Historic Depot Town. 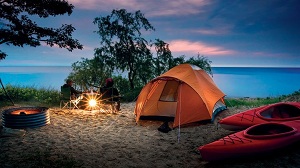 Michigan has more than 950 licensed, private, RV parks and campgrounds, with more than 111,000 licensed campsites. The state has more than 160 county or government operated campgrounds with over 14,700 sites – from rustic to full-service. Michigan is home to 102 state parks and recreation areas – as well as 133 state forest campgrounds – under the auspices of the Michigan Department of Natural Resources and seven forests/parks/lakeshores in Michigan under the jurisdiction of the U.S. Forest Service. Collectively, Michigan offers 15,000 sites on state and federal lands designated for camping. Michigan also boasts over 307,000 licensed recreation vehicles, including motorhomes and travel trailers.

The “Most Beautiful Place in America” is found right here in Michigan – the Sleeping Bear Dunes National Lakeshore – which stretches for 35 miles along the Lake Michigan shoreline through Benzie and Leelanau Counties. 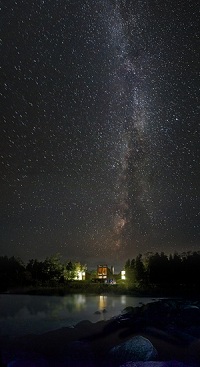 Northern Michigan is home to one of only 6 International Dark Sky Parks in the country (one of only 9 in the world). The Headlands International Dark Sky Park (www.emmetcounty.org/darkskypark/), is located just two miles west of downtown Mackinaw City. It stretches for 2.5 miles along the Lake Michigan shoreline, offering unparalleled viewing of the stars and Northern Lights.

Michigan has more lighthouses than any other state – at 117? The Straits of Mackinaw are referred to as the “Crossroads of the Great Lakes” with more than 20 lighthouses within a 15-mile radius. The best way to view them is via Shepler’s Ferry (www.sheplersferry.com), which offers boat excursions to the lights throughout the summer. For a map to Lake Michigan lighthouses, contact the West Michigan Tourist Association (www.wmta.org) and request a copy of their Lake Michigan Circle Tour & Lighthouse Guide. 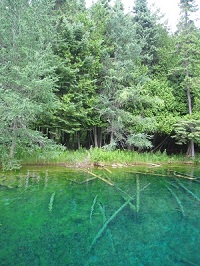 Kitch-iti-kipi (www.michigan.gov/palmsbook) is Michigan’s largest natural freshwater spring – centrally located in the Upper Peninsula (six miles northwest of Manistique) at Palms Book State Park. Originally called “Mirror of Heaven” by the early Indians, it is now one of the UP’s major tourist attractions. Measuring 300 feet by 175 feet (and about 40 feet deep with an emerald bottom), it maintains a constant temperature of 45°F. It’s not exactly known where the spring water comes from, but it flows at a rate of 10,000 gallons per minute.

The Great Lakes are home to hundreds and hundreds of shipwrecks, and “shipwreck alley” off the coast of Alpena in Lake Huron is home to the Thunder Bay National Marine Sanctuary (www.thunderbay.noaa.gov) – one of the largest preserves of these maritime disasters. This 448-square-mile area protects one of America’s best-preserved and nationally-significant collections of shipwrecks – totaling more than 200 (with more than 50 discovered and identified).

Detroit’s Belle Isle (www.detroitmi.gov/
DepartmentsandAgencies/RecreationDepartment/
BelleIsle.aspx) is a 982-acre island park situated in the Detroit River, between the United States and Canada, and accessible via MacArthur Bridge and is Michigan’s 102nd State Park. Managed by the Detroit Recreation Department, it is the largest island city park in the U.S. and the third largest island in the Detroit River (after Grosse Ile and Fighting Island). A tourist haven for generations, Belle Isle is home to the Anna Scripps Whitcomb Conservatory, James Scott Memorial Fountain, Dossin Great Lakes Museum, a municipal golf facility, nature center and a half-mile swimming beach.

To get you in the spirit, check out this impressive (and award-winning) line-up of Pure Michigan videos (www.youtube.com/puremichigan) from Travel Michigan!

To get up-to-date conditions for all of your favorite summer activities, check out these websites: