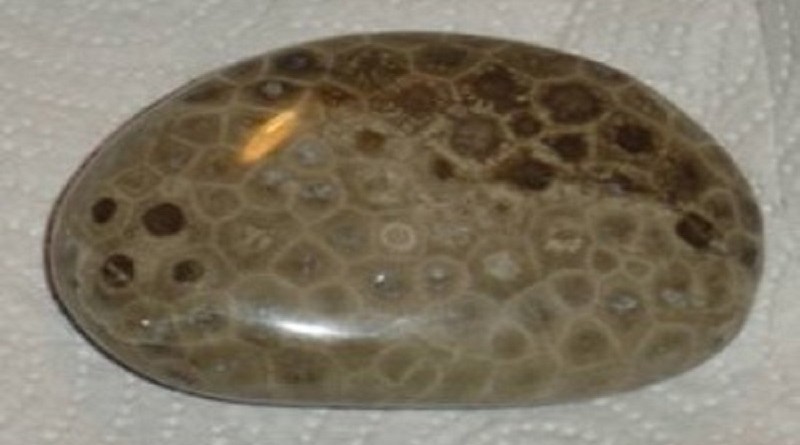 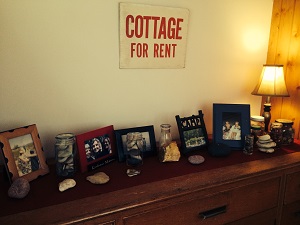 With its unique location nestled among the Great Lakes, formed by ancient glacial tracks, Michigan is a prime location for beachcombing and rock collecting – both along the shoreline and at countless inland lakes. Spring is the ideal time to scour the beaches for rocks that have been churned up over the winter, before the thousands of tourists have had the time begin their search.

I’ve been fascinated with rocks for years – always picking up random stones on walks along the beach or trails around Michigan. Those with special meaning are marked with a Sharpie (date/time/location) and are displayed in prominent places around my home. I have jars of rocks scattered in various locations around the house and garden.

When my grandmother passed away several years ago, I was quick to claim a couple buckets of stones she herself had gathered. Many of them were added to the landscape of my garden but one large wire basket full sits on the deck as a constant reminder of this fascination that has been handed down from one generation to the next (even my kids are occasional collectors).

Michigan is full of all kinds of interesting rocks…many you are likely to be familiar with, but some you may not. 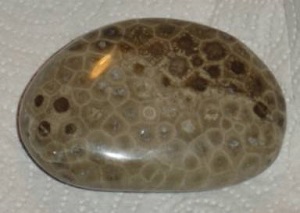 Petoskey Stone – Established as Michigan’s state stone in 1965, the Petoskey Stone is actually a fossilized coral (Hexagonaria pericarnata) from a coral reef that existed during the Devonian era, 350 million years ago. The stones were formed as a result of glaciation, in which sheets of ice plucked stones from the bedrock, grinding off their rough edges and depositing them in the northwestern portion of Michigan’s Lower Peninsula.

The name comes from an Ottawa Indian Chief, Chief Pet-O-Sega – for which the city of Petoskey is also named. Although this area along Little Traverse Bay offers premier stone hunting, they can also be found along Lake Michigan beaches over near Sleeping Bear Dunes National Lakeshore, around Power Island in Grand Traverse Bay and in and around nearby Torch Lake.

Antrim County hosts a Petoskey Stone Festival, May 24, at Barnes Park in Eastport. Activities include a stone skipping contest, Petoskey Stone beach hunt and plenty of other family activities. 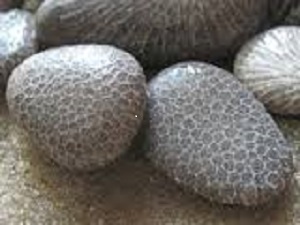 Charlevoix Stone – With has similar roots in the fossil kingdom, this dainty rock is formed from a once living coral – the Favosite coral (or honeycomb coral) – and can be found in abundance in many of the same places that Petoskey Stone can be (they are cousins, after all).

Leland Bluestone – In the late 19th century, the Leland Lake Superior Iron Company operated along the Lake Michigan shoreline in Leland (where the Leland Harbor and historic Fishtown are now located). Large schooners carried the iron ore from Escanaba, and foundries produced the iron for the railroads – the process produced a “slag” of blue glass or stone.

Bluestone is now popular with many local jewelers and has even inspired the name for one of Leelanau Peninsula’s newest wineries, Blustone Vineyards.

Puddingstone – Be on the lookout for these colorful stones — a conglomerate of smaller pebbles — found in northern Lake Huron waters. The rounded pebbles and the sharp contrast in color gives this type of conglomerate the appearance of a raisin or Christmas pudding and the various varieties are identified based on composition, origin and geographical distribution.

On Drummond Island, rockhounds will find jasper conglomerates (Drummond Island puddingstone) which occurs as loose gravel within the Pleistocene glacial drift. These fragments were eroded by continental ice sheets from Northern Ontario spread across Michigan and the Straits of Mackinac.

The community of Cheboygan hosts a Puddingstone Festival, Aug 8-9, where historical scavenger hunts, geo-caching events, rock concerts and a life rendition of the story, “Stone Soup” round out the weekend. 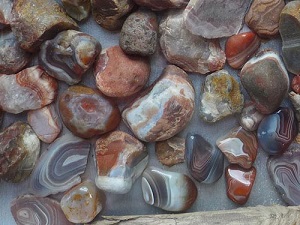 Lake Superior Agate – Some say Lake Superior agates are the oldest in the world. Ranging in size from about the size of a pea up to more than 20 pounds, these stones are generally irregular spheres. Made up of quartz, often reddened by iron and deposited in layers to create concentric circles that look like the rings on the cross section of a tree, these stones cast colors of red, orange and yellow.

The history of these agates dates back more than a billion years ago, when the North American continent began to split apart along plate boundaries. Here, magma upwelled into iron-rich lava flows throughout the Midcontinent Rift System and tectonic forces that attempted to pull the continent apart left behind lava flows that created the Superior trough, a depressed region that became the basin of Lake Superior. It was these lava flows that formed the conditions for the creation of the agates.

The Lake Superior Agates Fest is held at Muskallonge State Park on the shores of Lake Superior, Sept. 13- 14. The show is a gathering of amateur rock collectors, wanna-be agate collectors, agate hunting veterans and professional collectors exhibiting their collections. The show also featured a number of presentations and demonstrations of agate cutting and polishing, as well as some rocks for sale. 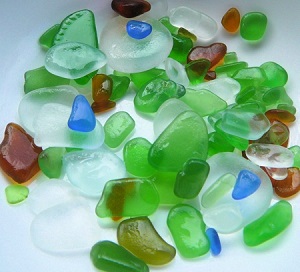 Beach Glass – Although not necessarily a “rock,” one of the more sought-after items is beach glass – which is formed when bottles (beer, pop, wine) have been discarded into the lake, and ultimately the broken pieces are smoothed by the rolling waters and sands. The main colors are green (7-Up, Mountain Dew), white or clear, brown (root beer) and the rare blue. 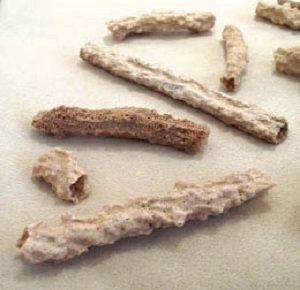 Fulgurite – Again, not a “rock” by definition, this unique beach treasure is actually petrified lightning! Found primarily along the Silver Lake Sand Dunes area, it is formed when lightning strikes the sand and fuses the grains together. Unlike in the movie Sweet Home Alabama, these formations are actually more brown or grey in nature, are fragile and hollow, and aren’t actually crystal-clear like glass.

For more, check out this great blog I found called LakeMichiganRocks.com!