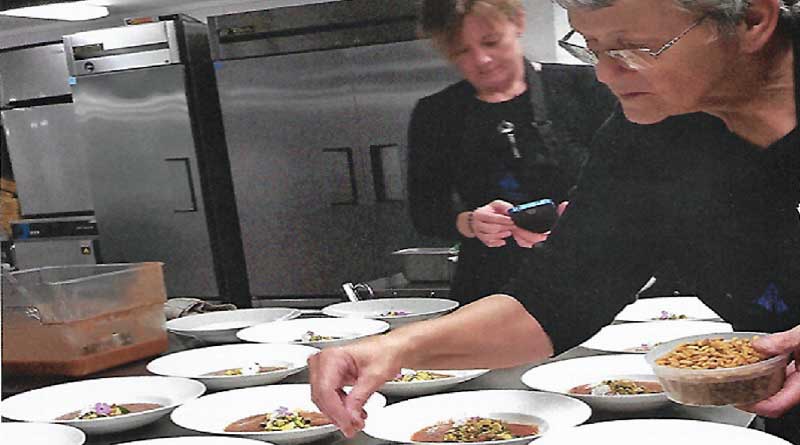 The Les Cheneaux Islands area of Michigan’s Upper Peninsula is known for many things – most notably the 36 islands that dot the waters of Lake Huron. Yet, since 2014, Chef Zach Schroeder has been on a mission to put the small town of Hessel (population 865) on the map for another reason – as premier dining destination.

Just three years after graduating from Northern Michigan University in Marquette with a bachelor’s degree in hospitality management (and after attending the Great Lake Culinary Institute in Traverse City), Schroeder was hired to run the boutique Les Cheneaux Culinary School — using skills he honed at restaurants such Hanna’s Bistro and Red Ginger in Traverse City, Grand Hotel on Mackinac Island, and Bayside Fine Dining on Drummond Island.

A native of the eastern U.P., Schroeder recognizes the role that the woods, waters and farmlands of Michigan play in developing the custom menus and he set out to establish relationships with local growers and producers from the very beginning. It’s a practice that benefits both his students and his guests. Fresh ingredients from places like Circle K Ranch in Rudyard, Dutcher Farms in Goetzville, King’s Fish Market in Moran and Suetopia Farm in Cedarville are staples for the ever-changing innovative farm-to-table menu.

“We focus on producing a locally sourced dining experience for our summer patrons, all while educating our students to become the future chefs of our community, state and beyond,” Schroeder says.

The one-year vocation program operates within a state-of-the-art facility, alongside an in-house summer internship restaurant. Hands-on classes are held from September through May, with an average of just eight students putting in long hours to master their craft. From the Friday of Memorial Day weekend through Labor Day, these passionate chefs-in-training and their faculty run a 55-seat restaurant during the dinner hours, Wednesday through Sunday (as well as Sunday Brunch).

“Hessel is not a place you would expect to find a dining experience like you will have at the Les Cheneaux Culinary School,” says Wayne Dickinson of Marquette, who visited t the restaurant during the summer of 2019. “The school’s restaurant is truly a hidden gem and well worth seeking out. The menu is limited, but innovative, featuring seasonally available ingredients, prepared perfectly and presented beautifully.”

Decorated with a blend of area art and historic images, the intimate restaurant boasts a southern wall of windows offering breathtaking views of the bay, marina and million-dollar sunsets. Al fresco seating and an open-air bar make this a popular gathering place for visitors and locals alike, when weather permits.

In peak season and on weekends, there is often a wait for a table – especially the second weekend of August when as many as 10,000 people are in the area for the annual Antique Wooden Boat Show.

“We always suggest to our guests to make reservations ahead of time as it is a destination for many who travel here,” says Becky Kogelschatz, who has owned and operated Hessel Bay Sunset Cabins with her husband, Perry, since 2001. “Our guests like to enjoy the fine dining experience and amazing views. Its location is convenient, just a couple blocks away from us.”

Despite being small in size, Schroeder and his team leave a big impression and people are taking note. A recent partnership with Lake Superior State University in Sault Ste Marie should beef up enrollment and that’s good news for all involved as the restaurant grows in popularity.

“With LSSU’s recruiting power now behind us, I’m thinking our numbers will grow and hold steady around 20 within the next few years,” says Schroeder of their new certificate program. “We are now fully accredited and can even accept federal financial aid.”

Students are coming to Hessel from all walks of life, from throughout Michigan and beyond. Most are recent high school graduates, but some adults are seeking second careers — following their passions for food, agriculture and the culinary arts right into the kitchen.

Such is the case with Marcy Misner, a journalist and foodie who wrote about the school for the Sault Evening News before becoming a student herself. Today, she is executive chef of Kewadin Casino in St. Ignace. Matthew Nelson, a native of Newberry, aspires to run his own restaurant. Meanwhile, he is executive chef at Mission Point Resort on Mackinac Island. And, after graduating from the program, Carie Birkmeier moved to Montana where she now serves as lead designer and food writer for Big Sky Living Magazine.