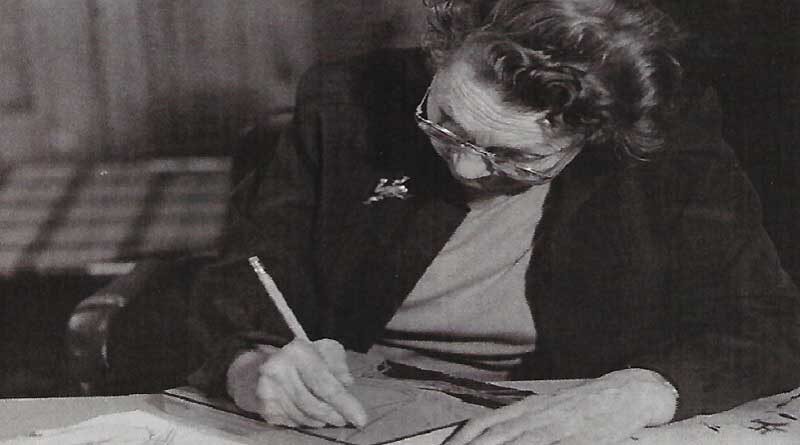 Born in 1906 in a small town in Michigan’s thumb region, Sara Gwendolen Frostic became a one-of-a-kind artist with a legacy spanning 70 years and counting.

Despite suffering from lifelong physical hindrances after contracting polio as an infant, Frostic, who spent her early years in Croswell, found the strength and determination to carve her own path — which led her to Benzonia in Benzie County.

This past spring, Gwen Frostic Prints was added to the National Register of Historic Places, thanks in large part to the efforts of the Michigan State Historic Preservation Office.
The path to this honor was peppered with determination from the very beginning.

After studying arts education at both Michigan State Normal College in Ypsilanti (now Eastern Michigan University) and Western State Normal College in Kalamazoo (now Western Michigan University), Frostic went on to master metal crafts, taught art classes at the Detroit YWCA, and even operated a studio in the basement of her parents’ home, where she was commissioned to create two vases for Clara Ford, the wife of Henry Ford.

During World War II, she worked in Ford’s Willow Run bomber plant by day, and perfected her art on nights and weekends. By then, a metal shortage led her to discover what would become her signature medium: linoleum.

With her vision taking shape, Frostic acquired her first printing press and set up shop in downtown Wyandotte, where Presscraft Papers was born.

By the 1950s, Frostic had relocated to the Lake Michigan shoreline town of Frankfort. Here, the marshes and countryside were full of muses — frogs, blue herons, waterfowl, cardinals, deer, and raccoons — along with blossoming wildflowers and vibrant greenery. She spent hours sketching and then transforming blocks of linoleum with her sharp carving tools until delicate scenes appeared.

A Heidelberg press was used to print the artist’s (reversed) images onto heavy pieces of feathered paper, as well as napkins, calendars, journals, and even books of poetry written by Frostic herself, all of which are still coveted today.

Frostic eventually purchased 40 acres along the Betsie River in Benzonia, where she established her landmark studio and gallery. After just seven months, Gwen Frostic Prints opened on April 26, 1964, her 58th birthday.
Tucked into a hillside, the studio melds into its surroundings, which includes boulders, tree trunks, a stone fireplace, undulating rooflines, and a natural spring fountain — giving the space an organic flair inside and out.

Frostic never married and never had any children, although she had siblings, nieces, and nephews. One nephew, Bill Frostic, served as head pressman at Gwen Frostic Prints for 49 years.
As business grew, Frostic added to her shop, which today encompasses 23,000 square feet. The business has 15 Heidelberg printing presses and 11 summer season employees. Frostic ran the operation until her death in 2001, just one day shy of her 95th birthday.

Upon her passing, she bequeathed $13 million to Western Michigan University (one of her alma maters), and in 2007 the college’s board of trustees renamed its art school the Gwen Frostic School of Art in her honor.

Frostic’s easily recognizable art remains timeless, as generation after generation makes the pilgrimage to her shop in what has become a tradition for many families.

Kathy McElroy, of Waterford, says: “I grew up in Benzonia and my mom would take us to Gwen’s several times a summer so we could watch the presses printing out the beautiful cards. My sisters and I have continued that tradition through the decades.”

In 2010, Kimberly and Greg Forshee purchased the business. Kimberly had a career in media in Traverse City and worked for the Frostic studio for a time before she and her husband bought it.

“We’re honored to be caretakers of the building, to keep her legacy going,” Kimberly Forshee says. “People are just drawn to this place. Gwen didn’t believe in advertising. She used to say that if the work is good, people will come and they will tell their friends.”

PLAN IT!
Gwen Frostic Prints, located at 5140 River Rd., Benzonia, is open from May through October. The online shop is open year-round.
gwenfrostic.com

Reprinted from the Fall 2021 issue of Michigan BLUE magazine.