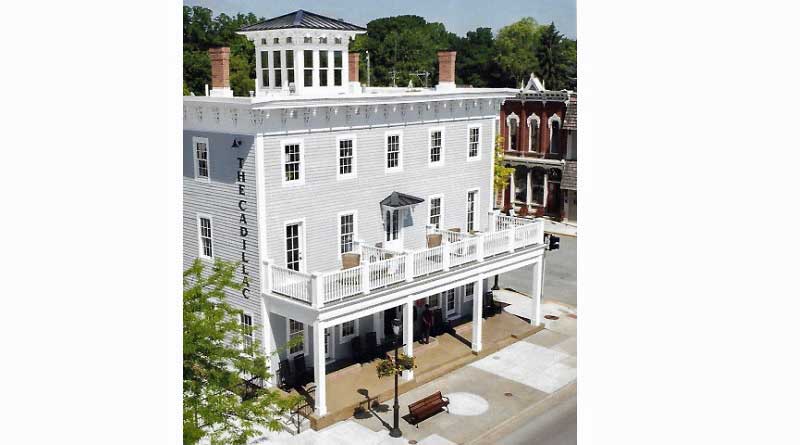 Much like the waves that roll in upon the Great Lakes shoreline, the port town of Lexington has seen a rise and fall of population and industry over the years. Settlers first arrived here in the 1830s and by mid-century this was a bustling port town built upon lumbering and later oil prospecting in Michigan’s thumb region.

To serve a growing population and business trade, the 30-room Cadillac House hotel was built on the corner of what is now Main Street and Huron Avenue, just three blocks from Lake Huron. Its grand opening was held on July 4, 1860 with all the fanfare of the era, including a parade and ball attended by guests brought in by steamer ship from Detroit, just 80 miles to the south.

Over the next century, the Cadillac survived several fires, the loss of vital industry, the Great Depression and significant changes in Michigan’s travel industry. In the mid-1950s, they closed the hotel and focused solely on the bar and restaurant. A facade change in the 1970s disguised the building beneath an A-frame “Swiss chalet” design, but its true beauty remained just waiting to be dusted off and polished.

In the summer of 2016, The Roxbury Group—a Detroit-based real estate development company, purchased the building and began the $3.5 million project of restoring the Cadillac House to its original grandeur. In less than two years, they reopened the village’s crown jewel on July 3—as a tribute to the original unveiling 158 years prior.

“The Cadillac House again fits in with the rest of our downtown area with other buildings like the Lexington General Store, Weekends, the Blue Water Winery, The Town Ship and others from the late 1800s,” says Beth Grohman, Village Clerk.

Built in 2008, the 293-seat Lexington Village Theatre hosts concerts, stage productions, stand-up comedy shows and other live performances adding year-round energy to this small community. Now, visitors who make their way to town for a show can find upscale overnight accommodations and a casual restaurant to welcome them.

The hotel at Cadillac House currently offers 12 guest rooms rooms, including two expansive 2-room suites with private balconies overlooking downtown and the marina in the distance. Blending historic elements such as refinished original wooden floors with the finest furnishings and modern amenities, the rooms offer a luxurious place to escape just steps away from the expansive main floor tavern and restaurant.

In addition to its wine and beer selection, including several Michigan brews on draft, visitors to the Cadillac House will find a solid craft cocktail menu. The seasonal Lavender Thyme Lemonade is refreshing after a hot summer day spent out on the lake, exploring the thumb’s natural areas or shopping throughout the downtown.

As a true nod to Michigan, the signature summer dish features grilled lake trout with asparagus, topped with a lemon caper butter sauce. Paired with a Michigan Cherry spinach salad or smoked whitefish spread, the menu is sure to please any local or Great Lakes visitor.

“Our goal in redeveloping the Cadillac House was to do more than just restore this magnificent building to its original beauty. It was to revive the most important landmark from Lexington’s rich history and connect that landmark in a seamless way to the village’s present-day life,” says Lexington homeowner and Founder/Principle at The Roxbury Group, Stacy Fox. “The reception by the community to the return of the Cadillac House Inn and Tavern has been nothing short of overwhelming, and we believe it is a testament to the power of historic preservation to enliven and enrich our small towns across the state.”

It isn’t just the village that is paying attention, the state of Michigan is well aware of the impact this restoration has made on the region.

“Building awards are presented to outstanding rehabilitation projects that have made a significant contribution to the preservation of Michigan’s heritage,” says Ruth E. Mills, Chair of the MHPN Awards Committee. “First, it was a lovely restoration of the building to its circa 1860s appearance. Second, the project demonstrated one of the MHPN’s key messages: that historic preservation helps to revitalize communities and support economic development. This project utilized federal historic preservation tax credits and leveraged that and other funding sources to return hotel rooms to Lexington’s resort community, attract new visitors to the area and create new jobs.”

For more about the Cadillac House, visit thecadillachouse.com.