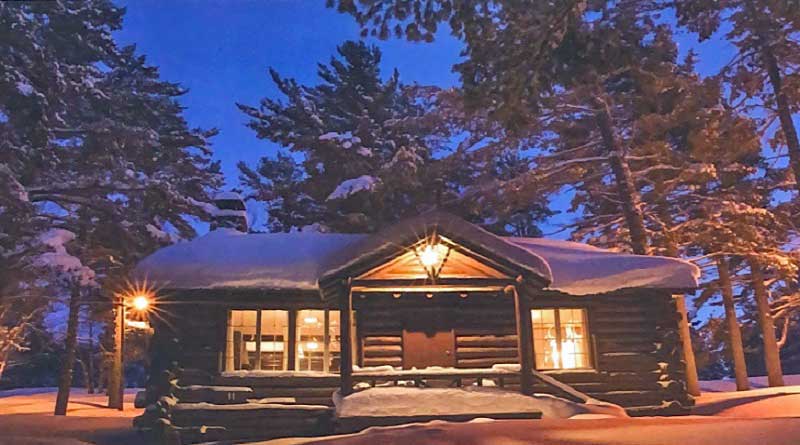 Renovations take time, especially at a wonderfully historic resort that’s tucked into the woods of what many consider to be the most remote region of Michigan.

The Keweenaw Mountain Lodge, with its 1930s-era log cabins, dining room, and golf course, sits at the tip of the Keweenaw Peninsula near scenic Copper Harbor — the northernmost community in the state. Only Isle Royale National Park, 50 miles away in Lake Superior, lies farther north.

After 84 years of being owned and operated by Keweenaw County, the property was purchased by John Mueller of Texas in 2018. The professor of entrepreneurship at St. Edward’s University in Austin began a two-year process of renovating the classic main lodge, which features a bar, dining room, and towering fieldstone fireplaces, and installing new carpet and lighting.

The Little Cabin Café was added in the back of the lodge and the offices on the northwest porch were removed, uncovering some of the structure’s original 1934 logs. It marked the first time since 1965 that those logs had been seen by the general public.

All of the lodge’s 24 cabins — a combination of two- and three-bedroom units along the 18-hole golf course’s first fairway and the woods — were reroofed. Most of the single-bedroom duplex cabins were converted into two-bedroom/two-bathroom spaces. Eventually, Mueller plans to redo the interiors of the other cabins and convert the adjacent, stand-alone six-room motel into two-story condo units.

“Our buildings have a national park feel. We’re situated between two national parks — Isle Royale National Park and the Keweenaw Historical National Park,” Mueller says. “As we implement our vision of being a resort focused on outdoor activities, we’ll work to marry history with the future to get our vibrant and progressive present.”

What’s the Texan’s connection to the Keweenaw area? Mueller previously lived in Kalamazoo and was a professor at Western Michigan University. His son is in his fifth year of studying mechanical engineering at Michigan Technological University, about an hour’s drive south of the lodge in Houghton. “My initial investments in the area have been in several buildings in the historic downtown of Calumet,” Mueller says.

LOCAL HISTORY: The Keweenaw area was rich with copper mining operations until the 1929 stock market crash, which left the local economy decimated. Unemployment was at 75 percent, one of the highest rates in both the state and the nation at the time. In the early 1930s, the Works Progress Administration (WPA), created by President Franklin D. Roosevelt to employ millions of job-seekers, mainly on public works projects, led to the development of a major resort on nearly 170 acres donated by the Keweenaw Copper Co. Architect Ocha Potter was the designer, and more than 120 locals were hired to work on the development.

First came a nine-hole golf course in 1933, followed by a clubhouse and a series of Lincoln log-style cabins in the years that followed. Today, the resort — which is listed on both the Michigan (1976) and the National Register of Historic Places (1980) — remains a vital part of the Keweenaw tourism scene.
Previously operating as a seasonal summer resort — except for the winter of 2007-2008 and 2008-2009, following a property expansion — the resort is welcoming guests for the upcoming seasons, for a three-night minimum stay.

LEGENDARY: Average snowfall is 20-plus feet every winter!

Lodge guests are encouraged to enjoy the great outdoors, including a half-dozen nearby waterfalls, during every season. There are no televisions, microwaves, or phones in the cabins, but there’s plenty of space for reading and cozying up by the fireplace found in each cabin.

TIP: For a special, romantic getaway, reserve Cabin 2, known as the “Honeymoon Suite.” It features a wood-burning fireplace and a Jacuzzi tub.

DINING: Recent dining room menus were created by Lebanese-born chef Widad Mueller, who has a dual degree in culinary arts and pastry from the French-influenced Sullivan University in Louisville, Ky. Menu items focus on rustic, worldly foods such as smoked fish and hummus dips with house-made flat bread, the KML classic burger, and broiled Lake Superior whitefish or trout. Seafood lasagna and Middle Eastern dishes such as Greek salad round out the selections.

LOOKING AHEAD: The golf course continues to improve thanks to better maintenance, Mueller says, adding, “We received compliments (in 2020) that the golf course has never looked better.” He explains that they strive to have excellent greens while maintaining the course as an enjoyable wilderness experience.
The resort recently added FlingGolf and is planning to introduce foot golf in the future. “This incorporates more members of the family,” Mueller says. The lodge also plans to schedule organized mountain biking rides and hikes on the trail networks around the resort.

NEARBY: One of the oldest attractions in the area is Fort Wilkins, which was built in 1844 and became a state park in 1923. It was restored and developed during the WPA years. The historic grounds provide a scenic backdrop for exploring miles of trails that stretch out between Lake Fanny Hooe and the park. For awesome views of Lake Superior, travel slowly along the 10-mile Brockway Mountain Drive. At 735 feet about the town of Copper Harbor, it’s the highest paved road between the Rocky Mountains and the Alleghenies.