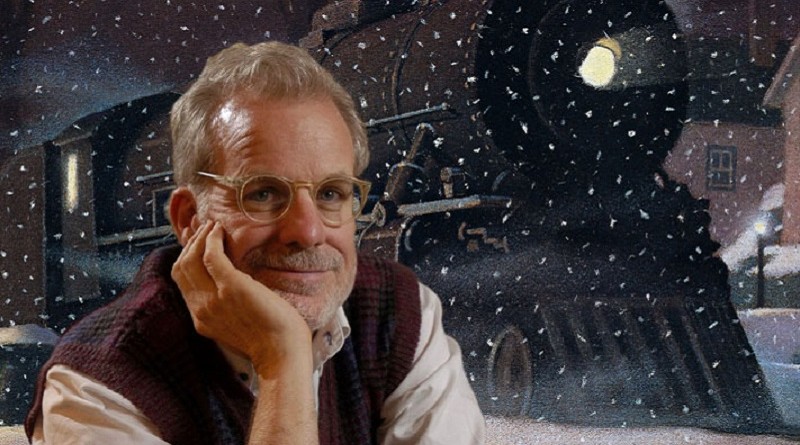 His sixth title, The Polar Express hit the bookshelves in 1985 and has worked its way into the hearts of all who have read and shared it.

Partially-based in Grand Rapids, this holiday classic tells the story of a young boy who questions the existence of Santa Claus. On Christmas Eve, as he is lying in bed, he hears the rumbling sounds outside of a train – The Polar Express. The boy rushes outside and is invited by t he mysterious conductor to take a trip aboard the magical train to the North Pole. 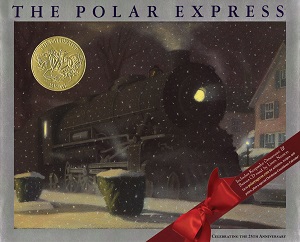 Once on board, the he joins dozens of other children – all dressed in their PJs, singing carols and drinking hot cocoa. The train then makes its way along the tracks, passing by the Herpolsheimer Department Store – a fixture in Grand Rapids for decades and a respectful nod to his hometown by Van Allsburg – en route to the North Pole.

After countless adventures along the way, the children arrive at the North Pole where they encounter thousands of elves gathered in the center of town preparing for Santa’s departure. The sounds of the season are heard by all, except the boy who still struggles to believe in Santa. It’s at this time, however, that he is handpicked by Santa to receive the first gift of Christmas. His disbelief is pushed aside and he shyly chooses a beautifully-sounding silver bell from Santa’s sleigh, which he places in the pocket of his robe. 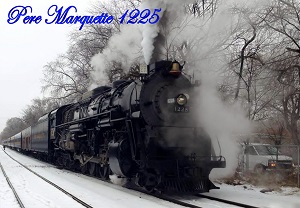 During the train ride home, the boy discovers that the bell has fallen through a hole in his pocket. Saddened at the loss, he returns home and goes back to bed. On Christmas morning, while opening gifts with his family, the boy’s sister finds a small package tucked under the tree. Inside, is the bell he had lost…his belief, reinforced yet again. Ironically, only he and his sister can hear the beautiful ringing of the bell – his parents commenting that it must be broken.

The book ends with the now famous quote:

“At one time, most of my friends could hear the bell, but as years passed, it fell silent for all of them. Even Sarah found one Christmas that she could no longer hear its sweet sound. Though I’ve grown old, the bell still rings for me, as it does for all who truly believe.” 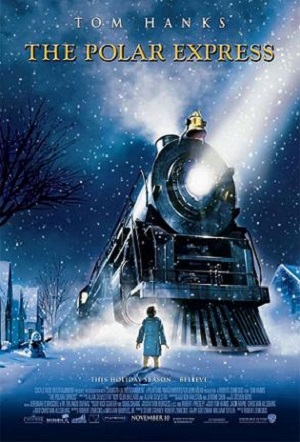 In 2004, an animated version of The Polar Express hit the big screen, with Tom Hanks playing multiple roles including the boy and his father, the conductor, a hobo, Scrooge and Santa himself. Peter Scolari (who starred with Hanks in the 1980s television series Bosom Buddies) also stars in the prominent role as the “Lonely Boy.”

Directed by Robert Zemeckis (who also worked with Hanks in Forest Gump and Castaway), the movie utilized a new filming technique called performance capture or “mo-cap.” The method involves attaching infrared sensors all over the body, with an additional 150 on the face, to digitally-record the movements of the actor which are then converted into an animated finished product.

The 3D movie premiered in Grand Rapids – on the IMAX screen at Celebration! Cinema North – on November 5, 2004. The red-carpet affair drew the “who’s who” of the community, including Van Allsburg. Scolari was the celebrity guest of the evening. Following the movie screening, guests made their way downtown to DeVos Place, where an elaborate and holiday-themed black-tie after party was held. Sponsored by the Hospice of Michigan’s Pediatric Foundation, the benefit attracteds some 1400 people and raised more than $1.3 million.

The Polar Express has become a blockbuster holiday movie, snagging more than a dozen nominations from multiple organizations for its music, editing and animation. The film won an ASCAP award for “Top Box Office Films” as well as Grammy award for “Best Wong Written for Motion Picture, Television or other Visual Media” and the Jackie Coogan Award for “Outstanding Young Ensemble in a New Medium.”

While Van Allsburg no longer lives in Michigan, the mutual respect between the author and his hometown of Grand Rapids remains evident. In 2007, the newly built Grand Rapids Art Museum compiled an exhibit of Van Allsburg’s works into a four-month exhibition – Another Place, Another Time: Chris Van Allsburg Drawings. The exhibit featured 77 large-scale drawings – in pen and ink, charcoal and watercolor – from the author’s personal collection. An invitation-only gathering and discussion with Van Allsburg was also held for some 350 lucky individuals to kick off the exhibition early that October.

For more about Chris Van Allsburg and his collection of works, visit www.ChrisVanAllsburg.com.

The blueprints for the Pere Marquette 1225 locomotive were the prototype for the image and sounds for The Polar Express? Appropriately, the train’s road number is the date of Christmas: 12/25. 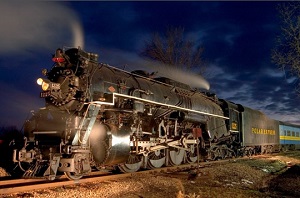 The PM1225 was built in 1941 and operated until 1957, when it was put on display at Michigan State University (coincidentally, Van Allsburg says as a child, he would see and often play on the train while in East Lansing for Spartan home football games).

In 1971, work began to restore the train and put it back in operation. The PM1225 made its first excursion run in 1988 and is now part of the extensive collection owned by the Steam Railroading Institute in Owosso. Themed train rides are offered year-round, including the running of the popular “North Pole Express” each holiday season.

In July 2004, just months before the release of The Polar Express, the PM1225 was listed on the National Register of Historic Places.

For more information about the Pere Marquette 1225, the Steam Railroading Institute and their holiday running of the “North Pole Express,” visit http://michigansteamtrain.com.

Reprinted, with minor edits, from the winter 2011 issue of Michigan HOME & Lifesytle Magazine.