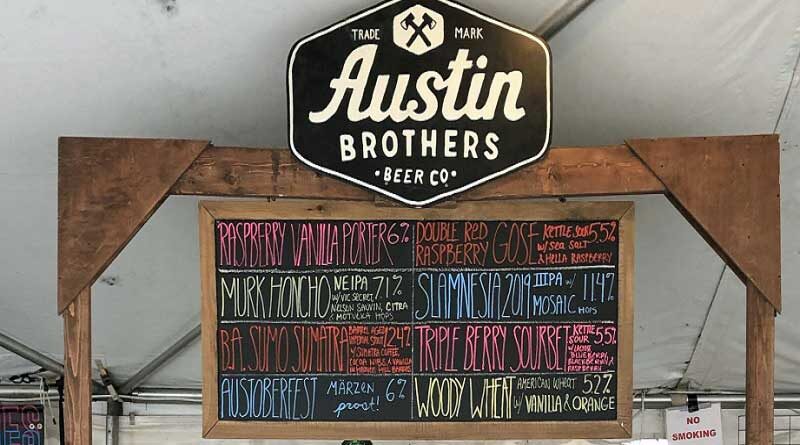 Sometimes a destination is so special, you’re compelled to uproot your life and relocate there.

In the early 2000s, Dana and Julie Austin set out from their southern California home with their sons, Blake and Brant, to explore the America via motorhome, hitting 47 states over the course of two summers. Among the cities they stumbled on was Alpena, Michigan, along the northeastern shore of Lake Huron.

Back home, Dana continued his career as a Fire Captain in San Bernardino; Blake worked as a golf pro for Oak Valley Golf Club in Beaumont; and Brant set out to become a brewer. He enrolled in the esteemed Siebel Institute of Technology, a Chicago-based vocational school that has been offering brewing education since 1868. As part of that program, he spent time at the Doemens Academy in Munich before ultimately graduating from Siebel in 2011. From there, he honed his skills at Ballast Point Brewing in San Diego (2011-2013) and Mother Earth Brewing in Vista (2013-2014).

Dana ultimately retired and in 2014 the Austin family decided to move nearly 2500 miles east to northern Michigan, to that quaint vacation locale that left a lasting impression nearly 10 years before. Tapping into Brant’s skillset, they quickly got to work setting up a family business – Austin Brothers Beer Company.

First settled in 1835, Alpena was officially founded five years later before being incorporated in 1871. By 1884, the population had grown to 9,000. Based on the 2020 census, it is now just under 10,000 and is the second most populated city in northern Michigan (after Traverse City).

A half dozen breweries operated in Alpena between the 1870s and 1920s, when prohibition put a halt to such businesses. Decades later, as the craft beer movement took hold in Michigan, Alpena welcomed Fletcher Street Brewing which opened in 2003 and closed for good in June 2014. Austin Brothers was established in late 2014, and open for business by the following September.

“It’s cool to be a part of Michigan’s growing beer industry,” says Brant. “I think the number of breweries here has doubled since we opened our doors.” Currently, Michigan ranks sixth in the nation for the number of craft breweries, according to the Michigan Brewers Guild and the Brewers Association, with just over 400. That number was 205 in 2015 when Austin Brothers opened.

There were only four beers on tap that fall when Austin Brothers opened its taproom and restaurant at 821 W. Miller Street, just outside of downtown Alpena, but that number quickly doubled. By their one-year anniversary, Austin Brothers had expanded to nearly 100 different beer recipes with a rotation of about 18 different beers on draft at any given time. This includes their standard line up as well as seasonal and trending styles which are crafted in small batches until they’re sure the public will enjoy them.

“Since day one, 45er IPA has been our signature beer. Coming from California, we wanted to bring a true West Coast IPA to Michigan palates,” says Chris Heikkuri, Director of Sales, of the beer named such because it is brewed along the 45th Parallel. Tasting notes reference hints of pear, grapefruit and tropical fruits attributed to the 2.5 pounds of hops per barrel, making 45er the best-selling beer by a large margin.

Coming up beer names is a fun and creative way to capture all the great and interesting things about where the beer is brewed.

“Hazy Depths Double IPA, a collaboration with the Friends of the Thunder Bay Marine Sanctuary, features different shipwrecks that can be found in Thunder Bay,” Heikkuri says. “ROCKPORTer is named after the state park where you can hunt for fossils during the day and see every star in the sky at night. NRTHRN LTS – a low cal, low carb, gluten-reduced beer – is another nod to the amazing night sky in northern Michigan.”

Pub visitors will also find a series of Shandies (beers mixed with lemonade) and unique “Brothers Blends” like a Cherralyzer – a mixture of the Parallyzer Double IPA and the Cherry Bomb fruit ale.

For their popular Murk Series (a rotating series of New England style IPSs), the names are drawn from pop culture like Murko Polo, Steve Murkel, Murking for the Weekend, Murk & Mindy, Murk Twain and Captain Murk.

“Those names come from everywhere – us, employees, customers, random emails from people we don’t know,” says Heikkuri. “We are always in the market for a good Murk name!”

While Brant handles the brewing operations, Blake serves as CFO and is responsible for the company’s financials, distribution management, sales and marketing. Since Covid, he has also taken over the kitchen where he serves up hearty sandwiches, handheld pitas, burgers and shareables like crispy Brussel sprouts, poutine tri-tip fries and smoked whitefish dip. He is also the pit master for the brewery’s 1000-gallon smoker (for those brisket, pulled pork and Cubano sandwiches).

Even mom and dad are in on the operations – Dana runs the front of the house and Julie manages all the merchandise for those who want to accessories with Austin Brothers logoed hats and shirts, along with glassware and other bar tools.

“The Austin family immediately connected with the community when they arrived in Alpena and quickly became a key player as part of the city’s hospitality revitalization,” says Alpena Mayor Matt Waligora. “Their service, beer, and menu set a high standard not only for breweries but restaurants in general and has certainly made them a local and travel destination. That obviously plays a role in our overall regional economic development.”

Outside, visitors will find plenty of patio and outdoor garden seating, cornhole tournaments and live music to enhance the brewery experience, drawing locals and visitors alike.

“We are lucky to have great local support, while also being in an area that continues to see growth in tourism every year,” Heikkuri says. “In the winter, we definitely see more of our neighbors, but there are always familiar faces sitting at the bar in summer as well.”

Beyond Alpena, Austin Brothers distributes their canned beers throughout Michigan, with 28 warehouses and 22 distributors according to Heikkuri.

“There are about 350 bars that carry our beer, and about 600 stores,” Heikkuri says, including Meijer, Walmart, Kroger, Spartan Stores and Total Wine. “Our distribution network covers all corners of Michigan. The only beer we ship out of state goes to Tavour, which is a company that runs an app that allows people to buy beer from breweries that don’t distribute in their state or are hard to find.”

This extensive distribution around Michigan not only builds brand recognition for the brewery, but it draws attention to Alpena and its surrounding area.

“The brewery has been a wonderful addition to our community. I go to professional conferences and people ask me about their latest recipes or let me know which kinds are their favorite,” says Mary Beth Stutzman, President & CEO of the Alpena Area Convention & Visitors Bureau. “The Austin family has fully integrated themselves into the fabric of the Alpena community and Michigan’s microbrew culture. We have really enjoyed welcoming the Austin’s to the community and they have created a destination brewery experience in Northeastern Lower Michigan that is known state-wide.”

Austin Brothers is one of two breweries operating in Alpena; Hopside Brewery opened downtown last July. It is also among more than a half dozen on Michigan’s “Sunrise Coast” – between Mackinaw City and Tawas City – along the US-23 Heritage Route, a Pure Michigan Byway. Passing through six counties in all, this Lake Huron shoreline area is a natural tourism area rich in culture, history, outdoor recreation and other hidden gems that draw tourists from far and wide (like families from southern California).

“These last couple years have emphasized the importance of community support to the success of our business,” says Blake. “It is fun to be a part of the growth of tourism in Alpena.”