Spring in Michigan is a time of awakenings…of wildflowers and edibles to be foraged…of bird watching and rounds of golf…of fishing and paddling on our rivers and streams. Spring is the time to beat cabin fever by hitting the trails, woods, paths and roads in search of greener pastures! Did you know Michigan has the largest rail-trail system in the nation. Across the state, more than 2,600 miles of old railroad lines have been converted for recreational use?

With more than 12,500 miles of state-designated trails that connect communities, provide health and economic benefits, and attract outdoor enthusiasts, it’s no wonder Michigan is known as “The Trails State.” Hikers, bikers, equestrians, off-road vehicle (ORV) users, kayakers and snowmobilers find enjoyment on the many inter-connected state trails. There are hundreds more miles of local, county and federal trails in Michigan.

According to a 2013 report by the Outdoor Industry Foundation, outdoor recreation generates $18.7 billion in consumer spending in Michigan, generating approximately 194,000 jobs a year. In addition, at least 63 percent of Michigan residents participate in outdoor recreation each year. 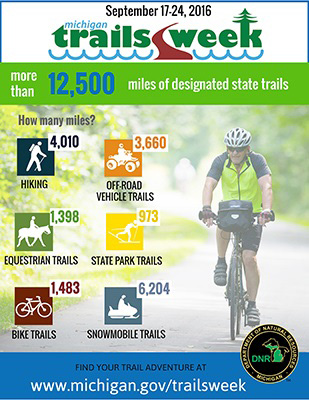 Michigan is home to a wide variety of hiking trails across the state, which showcase Michigan’s natural and cultural resources. A number these trails are maintained by the DNR and can be found in Michigan state parks, state forest lands or wildlife preserves.

Michigan boasts more than 1400 miles of bike trails of all terrain types, traveling along scenic countrysides and connecting urban centers. What Every Michigan Bicyclist Must Know is a guide designed to help pedalers safely and enjoyably share the public roads and trails with other users. The guide is published through a partnership between the League of Michigan Bicyclists, the Governor’s Council on Physical Fitness, Michigan Department of Transportation, and the Michigan Department of Community Health.

In July, 2016, community members and trail enthusiasts celebrated the completion of the 22-mile William Field Memorial Hart-Montague Trail improvement project. The trail was named after the late William Field, who led the effort and had the vision to develop one of the first “Rails to Trails” parks in the state. The paved trail winds through rural and wooded terrain and through the communities of Hart, Mears, Shelby, New Era, Rothbury and Montague.

In September, 2016, a new 32-mile multi-purpose trail from Petoskey to Mackinaw City in Emmet County was dedicated. The North Western State Trail (NWST) runs along the former Grand Rapids and Indiana line of the Pennsylvania Railroad and is open to all non-motorized uses year-round and to snowmobiles from December 1 to March 31. The 23-mile Alanson to Mackinaw City segment was improved over the last year with two new bridges and a 10-foot-wide packed crushed limestone surface. A 7.5-mile paved section of the trail, from Petoskey to Alanson, was completed in 2013.

Mountain bikers in Michigan recently scored a major win with the opening of the first 5-mile loop of the DTE Energy Foundation Trail near Chelsea. Located in the heart of the Waterloo State Recreation Area, the cutting-edge, sustainable trail is open to mountain bikers, trail runners, hikers and cross-country skiers and has been made possible by an innovative partnership between the DNR, the Potawatomi Mountain Biking Association and a $255,000 grant from the DTE Energy Foundation.

Michigan offers trails for boaters and paddlers too. The DNR is in the process of developing a policy to include water trails – some overseen by other entities and some yet to be developed – into a statewide system. The 30-year plan will help develop a state system of water trails. Helping lead the charge is the Land Information Access Association. 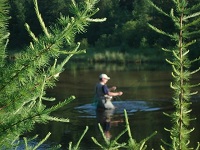 “Michigan is blessed with more than 36,000 miles of rivers and streams, including over 12,000 miles of cold water trout streams! The Natural Rivers Program was developed to preserve, protect and enhance our state’s finest river systems for the use and enjoyment of current and future generations by allowing property owners their right to reasonable development, while protecting Michigan’s unique river resources. Since 1970, 2,091 miles on sixteen rivers or segments of rivers have been designated into Michigan’s Natural River System – including the Jordan, Betsie, Rogue, Two Hearted, White, Boardman, Huron, Pere Marquette, Flat, Rifle, Lower Kalamazoo, Pigeon, AuSable, Fox, Pine, and Upper Manistee rivers.” – Michigan Department of Natural Resources.

There are approximately 1700 native flowering wildflower species of all shapes and sizes found in Michigan. The wetlands and woodlands present the first displays each spring – when marsh marigold, wild garlic, jackin-the-pulpit, bloodroot, trillium and Dutchman’s breeches make their showing. Blossoms can also be found throughout the summer in the dunelands, meadows, stream banks, shorelines and rocky slopes along the highways and byways. To learn more about Michigan’s wildflowers, download the DNR’s Michigan Wildflower Viewing Guide.

The Kalamazoo Nature Center has released of the second Breeding Bird Atlas for the state of Michigan. KNC coordinated the fieldwork and data collection which occurred between 2002 and 2008. More than 800 volunteers contributed to the project by making observations and confirming species throughout Michigan. Nearly 250 species are covered in this searchable/printable web publication. For more about birding in Michigan, click here.

Trout Unlimited was founded along the banks of the AuSable River near Grayling in 1959.

There are only 5 Dark Sky Parks in the United States (and only 9 around the globe) and one is found in Emmet County, Michigan – called The Headlands.

Michigan is home to the Karner blue butterfly – a federally listed endangered species and listed as a Michigan threatened species.

There are more than 850 public golf courses in Michigan – and Wawashkamo Golf Club on Mackinac Island (founded in 1898) is the state’s oldest continually-operated course. 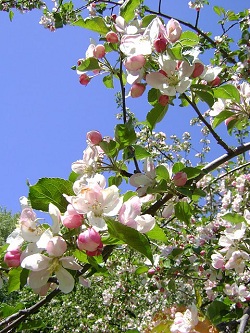 To get up-to-date conditions for all of your favorite spring activities, check out these websites: